Over the past twelve years, the Sheraton One Wall Centre has stood out as the oddball of Vancouver’s skyscrapers. The tower is a renowned city landmark for its height and prominence in the skyline. However, what made this tower unusual was not its height but its two-toned glass: reflective dark glass on the lower levels and contrasting clear translucent glass on the upper 17 levels. This is about to change beginning this April, when the building’s clear translucent glass is replaced with reflective dark glass for a consistent and whole look that fulfills the original architectural design.

Looking up, you might have wondered what architect or developer in the right mind would have given the skyscraper a two-toned glass appearance (what is otherwise a beautiful, slender building) that clearly goes far off course from the design of the tower itself and the multi-building hotel complex it was connected to. To set the record straight, this was not architect Perkins+Will’s original vision nor was it developer Peter Wall’s initial intention for the Sheraton Hotel complex.

This case has its origins with the City of Vancouver’s red tape. It certainly fits well into the City’s history of being over-controlling with the architectural designs of the city, to the point that architects and developers have now built a strong industry culture of “dumbing down” their own unique creative tastes and preferences in order for their designs to fit within the narrow framework of what the Planning Department and City Council will approve. Why spend money on designing and engineering a building that will not be green lighted, only to spend even more money and time later on to go back to the drawing board?

If you have ever wondered why so many of Vancouver’s towers look the same (a.k.a. “cookie cutter” designs), and why every tower built over the last 20-years uses light blue or green translucent glass, the answer lies largely with the City and its restrictive policies and conservative preferences. In all fairness, with recent city-approved proposals such as Arthur Erickson’s 1133 West Georgia and Bjarke Ingel’s Beach & Howe Tower, the City has made headway in gradually moving away from its past ways.

The City’s red tape controversy over the One Wall Centre goes into the history books of record-breaking poor taste and over-reaching. Mid-way into the skyscraper’s construction, when reflective dark glass was being installed onto the exterior, the Planning Department requested developer Wall Financial Corporation (Peter Wall) to change the tone of the entire building facade’s glass to a clear light blue tone that would blend in with the mountains and blue sky. It was concerned the reflective dark glass would dominate the appearance of the Downtown skyline, it strongly insisted on a change of glass tone mid-way into construction (even if it were to cost the developer millions in additional costs).

However, after a highly tense and hostile period of accusations, negotiations, and threats of legal action between the developer and the City, a compromise was made to allow the first 30 hotel floors to retain the already-installed reflective dark glass and the top 17 condominium floors to be installed with the City’s preferred light blue translucent glass. 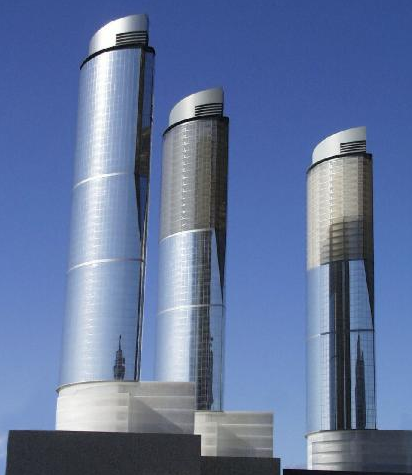 On its part, as disputed legally, the City also claimed it had not given Wall Financial Corporation prior permission to install dark reflective glass – approval was only given for “translucent” glass for the intention of creating a “translucent building.” Even if this were a case of the developer lacking integrity, should dark glass have ever been made into the controversy it became not just during the legal action/negotiation period but also during the city approval phase? Again, does the City’s irrational fear of the usage of dark glass not say more about their own narrow-minded nature? Surely, it has better things to do than bureaucratizing, politicizing, and micro-managing glass tone.

A few years after One Wall Centre’s completion, major issues arose with the glass of the top 17 residential levels – the seals on the clear blue glass were failing prematurely, leaking air and moisture into the building. The translucent glass also made summer heat and solar glare an unbearable issue, costing condo owners a small fortune in energy bills to power up their unit’s air conditioning.

Over the last two years, the strata council for the building’s residences approached the City and filed legal action against the building’s owners (Wall Financial Corporation) to replace all of the floor-to-ceiling glass windows with the reflective dark glass that was originally envisioned. The glass replacement will resolve the issues raised by the strata council, along with the added effect of giving the tower a consistent and whole appearance.

There is no denying this trouble was all unnecessary had city planners and councillors of the day been more sensible and sophisticated. It cost Wall Financial Corporation millions to change the glass to clear light blue 13 years ago, and it will now cost the strata council (through levies on the building’s condo owners, with some units to pay as much as $100,000) millions to change it again to a new reflective dark glass. To be exact, the price tag for this spring’s window overhaul is $7-million.

For seven years after its 2001 completion, at a height of 150-metres and 48-storeys, the Sheraton One Wall Centre held the title as the tallest building in the city. Its status for years as the city’s tallest has even attracted an annual stair climbing BC Lung Association charity race (Climb The Wall: The Stairclimb For Clean Air) to be held in the building. It is currently the third tallest skyscraper, with Living Shangri-La (201-metres, 62-floors, 2008-built) taking the tallest title and The Private Residences at Hotel Georgia (157-metre, 49-floors, 2012-built) as second tallest.

Written and researched by Kenneth Chan, the Deputy Editor at Vancity Buzz. Follow me on Twitter: @kjmagine 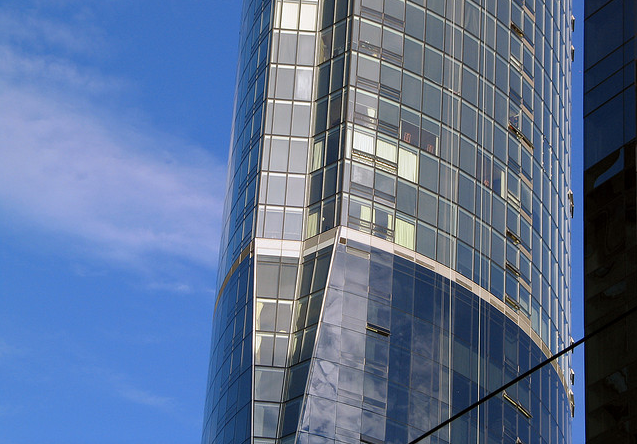