One Plus one: A Ticking Clock of a Musical is a Canadian written by Gil and Sarah Jaysmith. The musical reflects the lives of the writers who struggled with infertility for a lengthy period before giving birth to son, Galen, thanks to IVF (In vitro fertilization). The show features two couples trying to have children and the obstacles, both physical and emotional, they must encounter on this difficult journey.

The last time that One Plus One was presented, it was in workshop form and now it has taken form of an actual, full-length show, presented by theatre company Pipedream Theatre Project.

The Granville Island Revue Stage is a small space that used to host improv shows but has been taken over by The Arts Club Theatre Company to feature Canadian shows and other more intimate projects. The stage was bare save a few blocks painted to look like building blocks, with letters and primary colors.

The first number, ‘The Biological Clock’, set the quirky but emotional tone of the musical, showcasing the entire cast vocally with simple but suiting choreography by Aaron Lau. Clare Wyatt served as musical director and led the cast to interpret the complex and unique score with grace and depth.

The highlight of the show is the song ‘The Instructional Video’ where Madison (Danielle Lemon) is looking into IVF for the first time and stumbles across a video that explains the technical side of IVF through a hilarious song performed by the doctor (Mark Wolf) and nurses (Katie Purych and Stefanie Stanley Dalton). This light and humorous approach to educating the audience about IVF is incredibly effective.

The standouts of the production were definitely Danielle Lemon as ‘Madison’ with her honest approach to the struggle of infertility and strong vocals and Katie Purych as ‘Nikki’ who easily had the best voice of the night despite how few times she was featured. Purych’s also served as the show’s comic relief with her great comedic timing and gutsy approach to her character.

While most the of the show is vocally strong, there are some moments where actors seem to be struggling to reach some of the notes or keep up with the music. Whether this is because the music is too difficult for them or whether it was just this moment was unclear. Gil and Sarah Jaysmith’s music is beautifully complex and begs the question of whether it would be more successful if professionals were hired, despite this cast’s best vocal efforts.

The simplicity of the set was mostly effective but at times becomes distracting as the actors themselves make the scene changes that sometimes last longer than the scene that preceded them. This added a lot of time onto the show and seemed to effect the pacing of the actual scenes and songs at times. 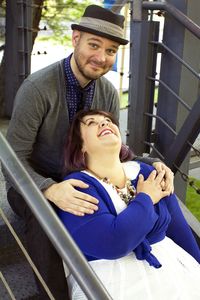 The show does well to educate the audience about IVF and infertility through song and dance. It also brings to light how common infertility is and the fact that many couples struggle with it. The music reflects the difficult subject matter with bold honesty and sometimes, raw humor. The balance of these two approaches is integral to the musical’s success. The musical is both revealing but also highly educational, giving the audience the proper vocabulary to be able to discuss infertility and a better understanding of what it looks like behind closed doors.

This is a story that needs to be told and thanks to Gil and Sarah Jaysmith, infertility now has a voice to educate the public. The music was beautiful and even though it ran for an outstanding three hours, it was a journey that was heartfelt and important.

One plus One runs until June 13 at the Granville Island Revue Stage. You can purchase tickets online at www.vancouvertix.com or at the Revue Stage box office.