Here is a one-night stand that you won’t mind seeing again. The Australian guys from the sleepwear brand made down-under, aptly named “One Night Stand,” are quite literally standing up against youth homelessness, and want your help deciding what charity to donate to!

On April 11, Jamie Green, Founder of the Australian-based sleepwear, One Night Stand, stood up for homeless youth by locking himself in a box for twenty-four hours.

“Any purchase made through our crowd-funding campaign that comes from Vancouver or even Canada we will provide a meal to a homeless person in need from Vancouver,” said Green. “To do this we would have to donate money from each sale to a Vancouver Homeless based charity of Vancity Buzz’s choice and the charity would do the distribution. One Night Stand is a global brand with dreams to affect positive change wherever we are making sales.” 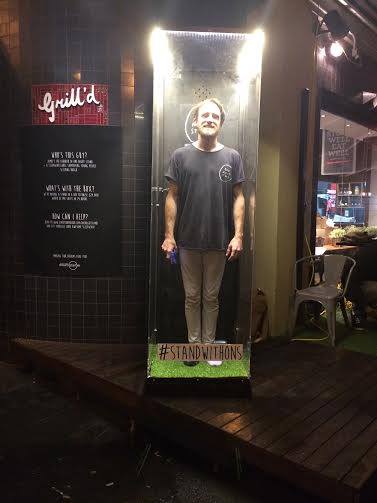 Giving a new meaning to “One Night Stand”

It wasn’t always comfy living-quarters for Green, whose beginnings put him in a financial red zone. His life took a downturn following what seemed to be a promising upswing; Green self-started and sold businesses before the age of 24. Six months later he was completely broke, unable to afford rent and sleeping on floors and couches.

Once he was back on his feet he realized how easy it was to slip through the cracks, and thus began his advocacy against youth homelessness. “I found that the best way for me to help was though my own social business that assists the non-for-profits and charities already working in this space,” explained Green.

With every purchase, they will provide food vouchers through their charity partner in Australia, Open Family. In the case of Vancouver, ONS will provide a local charity partner with funds from each sale to go towards meals, although they currently don’t have the means to set up an employment program. “I believe that businesses can and should be used as a force for good,” said Green. “It should be about so much more than making a profit – it can take on the role of changing the world!”

From having nowhere to sleep, to creating sleepwear to better the lives of those that are homeless, One Night Stand exists because the world is too small to be strangers. But to prove that, Green had to challenge himself to the physically uncomfortable task of locking himself in a perspex box where the rules were simple: no sitting for 24 hours.

“It could have been one of the most silly things I have ever done,” Green admitted. “But it sure worked!”

In 24 hours they had 250 backers in their crowd-funding campaign, raising $24,000 in 24 hours. From the first hour Green was busy in the box with an interview for the national breakfast show “Sunrise” doing live a interview. 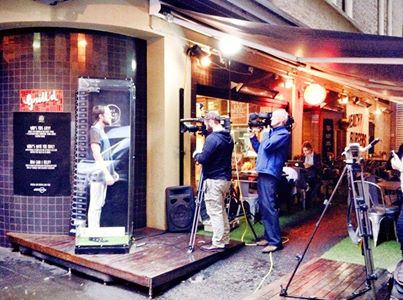 Throughout the day Green and his team had thousands of visitors, some even jumping inside the tiny box with him.

“As the sun went down and we got into the depth of the night, my legs started to feel like jelly and my back started to ache, my eyes started to get sore, and some of the very people I was standing for started to emerge (homeless people of Melbourne),” said Green. “We had chats about their stories and learned how they manage to survive the nights.”

He even witnessed one homeless guy’s swag get stolen, which was heart breaking to Green and his supporters. So Green and his friend rounded up some money and gave him another bag.

“The last hour was by far the worse I was struggling to keep up counting down the seconds until I could drop and lay on the grown,” said Green. “I did just that the second I could.”

ONS is still running the crowd-funding campaign for another 5 days and would love Vancouver’s support, as he says he has witnessed the issue first hand in the city.

“We want to help the people we can, so we will be donating the profit from every purchase from Vancouver to www.covenanthousebc.org (or a charity of Vancity Buzz’s choosing). So let us know!”