“When asked to prove that ‪bike lanes are ‘warranted’, remember that it’s hard to justify a bridge by the number of people swimming across a river.” – Jacquelyn H. Gulati

On Saturday, August 22, 2015 at 11:15 a.m., the large digital counter on the south end of Vancouver’s Burrard Bridge unceremoniously flipped from six nines to a one with six zeros: one million unique bicycle trips across False Creek thus far in 2015.

And while the bridge has seen consistent, modest growth in bicycle traffic since the protected lanes were installed in early 2009, this marks a significant spike, having flirted with the million mark several times, but never reached it so early in the calendar year.

Of course, many will dismiss such news as insignificant, pointing to the unseasonably dry winter and warm spring we experienced this year. However, these near-sighted arguments forget the insignificant number of people that were cycling over the Burrard Bridge prior to 2009. That is, the number of folks willing to “swim across the river,” or rub shoulders with cars, trucks and buses moving at 60-70 km per hour. It was practically zero.

As decades of experience in countless cities around the world tells us: infrastructure, not weather, shapes a great cycling city. 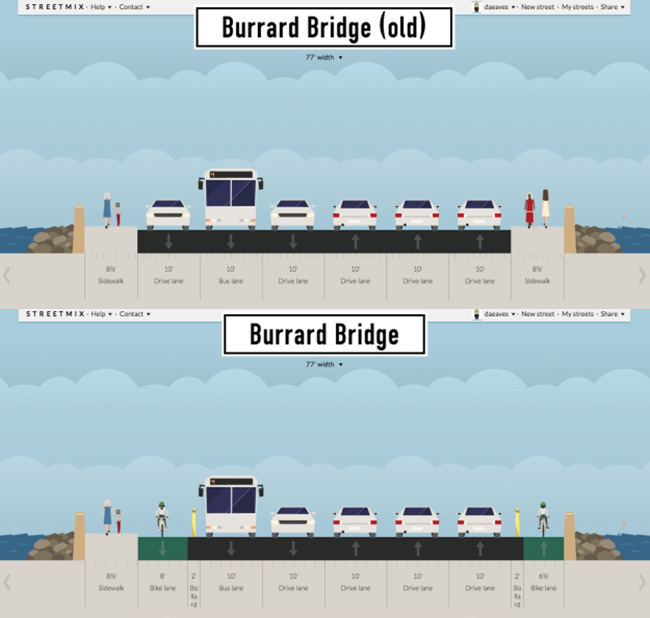 With the installation of each new protected bike lane, Vancouver moves towards a complete network – a ‘minimum grid’ of routes – which more and more people will utilize to get from A to B.

This spike, for example, should be attributed to the opening of the Point Grey Greenway in 2014, including the transformation of the intersection at Burrard and Cornwall. This much-lauded redesign has reduced the number of collisions, and significantly improved the walking and cycling connections into the downtown peninsula.

Further planned improvements to the north side of the bridge (at Burrard and Pacific) in 2016 – and the reclamation of one additional lane for walking and cycling – will only reinforce those connections. 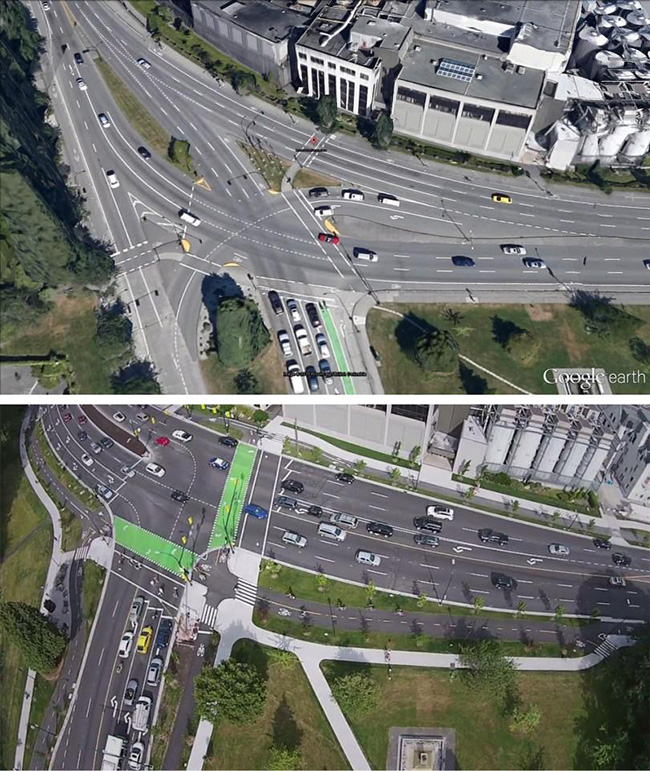 Want to better understand how far we’ve come as a city since the initial Burrard Bridge trial was floated seven years ago?

When the latest proposal to set these changes in stone was announced, local media tried heartily to find opponents, but couldn’t find a soul who would speak up against the vehicular lane removal.

Consider the case of Charles Gauthier, President of the Downtown Vancouver Business Improvement Association, who vehemently opposed the 2009 trial, telling City Council “we have to ensure we’re not choking the lifeblood out of the downtown.”

Seven years later, Gauthier has done a complete U-turn, voicing his approval of the newest deck configuration, calling it a “win-win-win for all users.”

As with so many things in life, seeing is truly believing, and we’d like to think that some hearts and minds have been changed with the unveiling of this digital counter in January of 2015.

It becomes increasingly difficult to suggest, “no one uses the bike lanes” when you have six zeros staring back at you. Furthermore, it serves as a celebration of every single sustainable crossing of False Creek, and makes you feel like your trip counted.

Of course, the Burrard Bridge isn’t the only Vancouver bikeway that has seen a sizeable jump in traffic this year. Every single route – from Dunsmuir Street to the 10th Avenue Bikeway – is having a marquee year.

This serves as further proof that as a functional bike network takes shape, and citizens adapt to its existence, usage rates will only grow. In the coming years, we hope to see many more projects from our wish list added to the city’s growing network. If that is the case, then the sky truly is the limit.