Wow, the last couple of days have been a blur.

Saturday’s highlight — other than spending more time exploring Olympic Park — was helping out in the mixed zone of the team figure skating event. Not my role or venue, but the venue press manager is a friend and asked if I could help out as they were short-staffed.

One upgrade pass later, I was directing media to stand here to speak to the Russian skaters and there for the Canadians, and so on. I used to love figure skating – back in the Kurt Browning era – but these days the only skaters I recognized were Virture and Moir.

One neat moment was having a few of the other volunteers burst into tears in the mixed zone after Yulia’s performance. “She’s just so perfect.” 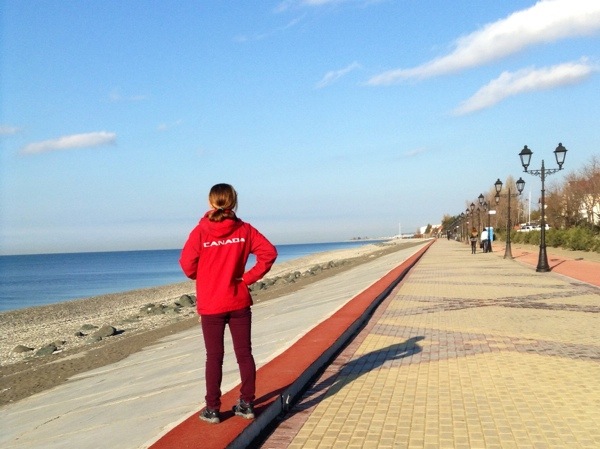 Sunday was my first official shift as a Sochi 2014 volunteer. That’s right, all this fun and I hadn’t even been put to work yet.

The day mostly consisted of meeting our supervisors, getting a venue tour and a quick crash course on flash quote reporting.

And before I knew it, we were in the mixed zone getting quotes from the Slovakian hockey team. I got a couple of decent quotes from Petr Nedved that were added to the Info 2014 system for accredited journalists to use as needed. There’s a real focus on quality over quantity, but it often takes a lot of notes to get that one gem. 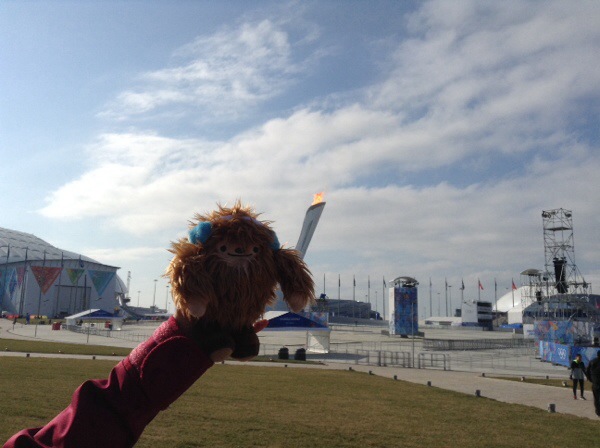 Quatchi taking in the sites by the Olympic cauldron

Yesterday was more of the same. Many of the teams cancelled their practices in the morning, so there wasn’t much to do. But by the afternoon, most of the NHL players had arrived so all of a sudden the venue was crazily busy. I caught a nice quote from a Finnish player, and another from Steve Yzerman at a Team Canada press conference.

After leaving the venue last night, I was passing by the Medals Plaza with the presentations already in progress and remembered that Charles Hamelin would be getting his gold medal, so I detoured into the plaza.

It’s always an amazing experience to see your country’s flag raised and have your anthem played at an Olympics. I only wish I had packed my red mittens! 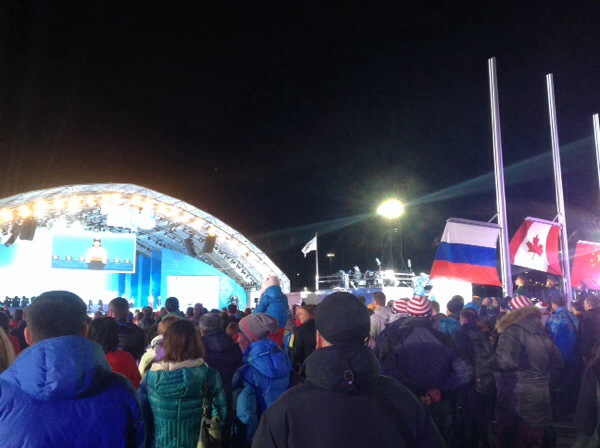 Today was even better. I’m feeling in the groove now, asked Sami Salo a question in English after all the Finnish media were done with him (he said he remembers me from when I worked for the Canucks, which was sweet), stood this close to Teemu Selanne in the broadcast side of the mixed zone (where I’m allowed to listen but not ask my own questions), watched a bit of Canada’s practice and got a short-but-exclusive interview with an Austrian player whose name is totally escaping me now but my supervisor said the quotes were really good, so I guess I don’t completely suck at this. Yay me!

The first men’s ice hockey games start tomorrow. I’ve got the whole day to rest up before we tackle CZE vs SWE.