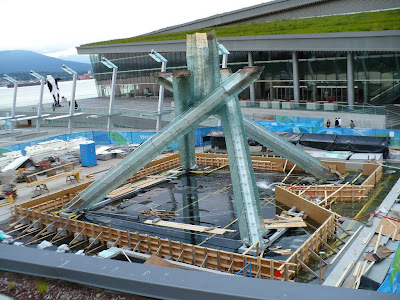 Image: Nobase2010
For those that were unable to snap a photo of the Olympic Cauldron lit up in all its glory, you’ll get a chance to this Canada Day. That’s right as Vancouver plans the biggest Canada celebration west of Ontario, the flame will once again be burning bright.
Since the Olympics the flame has been extinguished and much of the Jack Poole Plaza at the Vancouver Convention Centre has been under construction. The area surrounding the Cauldron is no exception as you can see in the photo above, the cauldron will placed in the middle of water. No doubt this was done as a preventative measure.
Retail units are also beginning construction spots along the centre will begin to fill up with shops. Expect at least on coffee shop if not two.
VancityBuzz.com