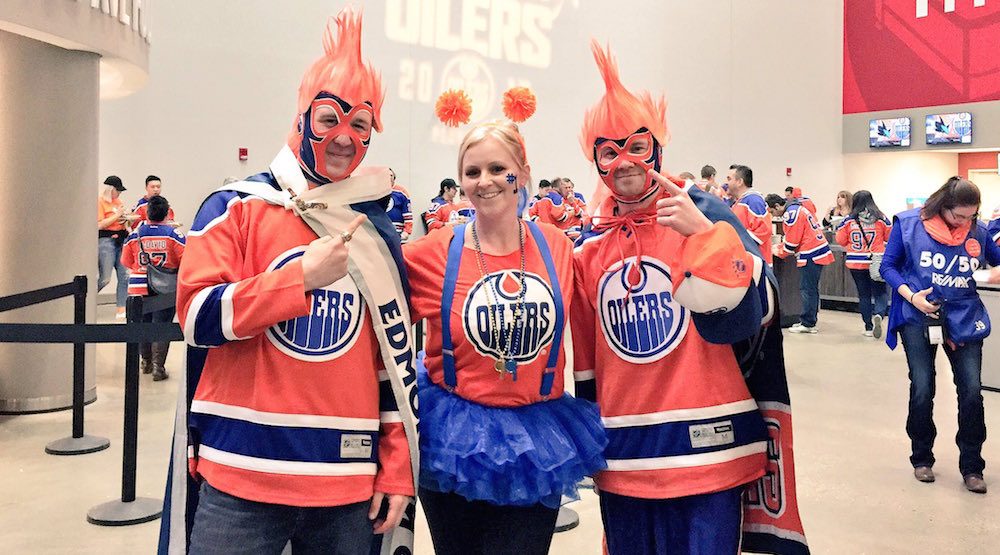 People in Edmonton are really excited about the NHL playoffs this season.

For the first time in 11 years, the Oilers aren’t a complete disaster, and have made the playoffs. They’re also in a brand new arena, with brand new orange jerseys.

They’ve also got a good, young team that includes 20-year-old superstar Connor McDavid, who is already the most exciting and best player in the league.

The Oilers organization is looking to capitalize on this, and they’ve chosen an interesting way to do it….

A limited number of concourse passes ($80 each) will be available for #Oilers home playoff games at the @RogersPlace north (LRT) entrance!

.@RogersPlace Passes will allow access to both the @RogersPlace main & upper concourse but do not include a seat or a view of the ice surface.

The team is selling “concourse passes” for home playoff games. For $80, you can get into Rogers Place, feel the atmosphere from other fans that have seats to the game, and proceed to find a TV somewhere to watch.

You don’t get a seat or even a view of the ice.

Here’s a letter the team sent to its fans that Ryan Batty of the Oilers blog Copper & Blue posted to Twitter: 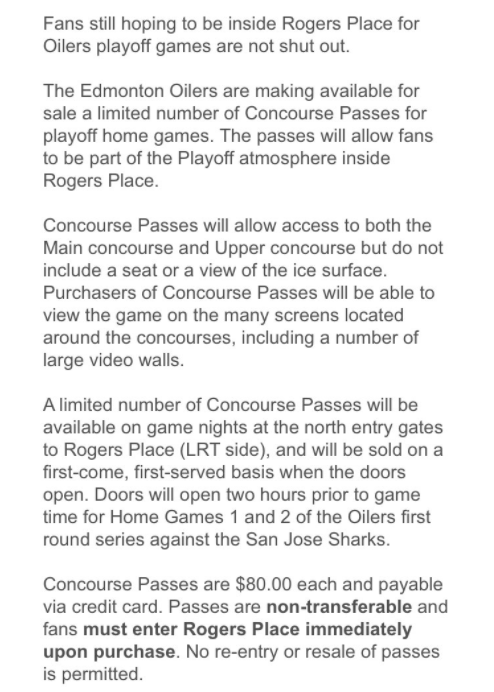 The response from fans was not kind.

@EdmontonOilers @Brandon_h @RogersPlace so you can stand at the bar? And talk about a game you can't see? Do I have that right?

@EdmontonOilers @RogersPlace This is the most greedy thing I have ever heard of. Respect your seat holders.

@EdmontonOilers @RogersPlace Terrible idea guys. This is really screwing over your fans that paid for actual seats. Drunk idiots hanging out in concourse. Sounds fun.

@EdmontonOilers @RogersPlace This is an insult to: A) Season Seat Holders, B) fans who payed 3rd party prices to attend, & C) Intelligence.

This is a terrible idea on a number of fronts.

First, offering $80 tickets to watch concourse televisions and pay arena prices is insulting to the consumer. It reeks of greed.

Second, it pisses off your most loyal customers. Concession and bathroom lineups are already increased during the playoffs, and packing a bunch more people into the arena makes it worse.

If the Oilers want to provide a cool experience for their fans that couldn’t get tickets to a playoff game, and profit off it, there’s nothing wrong with that. But don’t rip people off. Make it a cool experience like what the Toronto Maple Leafs and Raptors have done in Maple Leaf Square.

What the Oilers have done has the appearance of being greedy and extremely lazy.

Maybe their heart was in the right place, maybe they thought their fans would welcome this with open arms. It’s been 11 years, guess they didn’t know what to expect.