No scuba diving certification? No problem. A new deep sea exploration is being streamed online 24/7, allowing anyone with an internet connection to tour the waters of the Strait of Georgia and Pacific Ocean.

The University of Victoria’s Ocean Networks Canada (ONC) has launched a new three-week exploration of the ocean floor using two remotely-manned robots which will live stream their footage online. The expedition is supported by two ships, including the U.S.-based exploration vessel Nautilus and the research vessel Thomas G. Thompson.

“Ocean Networks Canada is delighted to have access to the E/V Nautilus in this exciting new partnership. It brings with it a world-class team of experts, high tech tools to do the job, and an onboard studio to support live one-on-one interactions from ship to shore. Attracting a ship that is one of only two dedicated ships of exploration in the world is testament to the work Canada is doing in the ocean,” says Kate Moran, Ocean Network Canada’s president.

The trip began on August 25 in the Strait of Georgia, Canada’s “busiest coastal waterway”, and will move into the Pacific Ocean off the south-west coast of Vancouver Island, 300 kilometres offshore “where new ocean crust is created and hot vents reside”, according to ONC. Nautilus is currently exploring the Strait under the guidance of president of Ocean Exploration Trust, Bob Ballard, the esteemed ocean explorer who discovered the Titanic wreckage.

This first leg will continue until September 3, then the Nautilus will join the Thompson in the Pacific on September 4 to explore sites such as the Clayoquot Slope, Folger Passage, Barkley Canyon and Cascadia Basin, as well as the junction between the Juan de Fuca tectonic plate and the Pacific plate. The exploration wraps up on September 16.

When in the Pacific, the robots, named Hercules and Jason will travel as much as three kilometres under the surface. 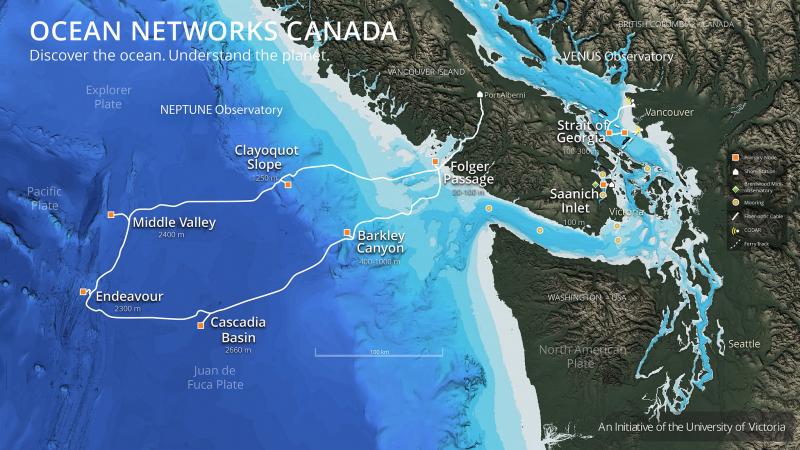 While the team has a number of goals for the mission, including collecting samples, installing a 3D camera and installing a new sensor system to detect underwater landslides; they will also be dropping several pig carcasses to determine how they decompose underwater. This forensic research aims to help police authorities solve cases in which a body has been recovered from the ocean.

The live stream videos are accompanied by narration from crews, scientists and educators aboard the ship, offering a rare analysis of the ocean floor and its species for anyone of any age.

According to Moran, viewers may seen any number of species, including kinds that have yet to be identified. Jellyfish, whales and cod are just a few of the possibilities. 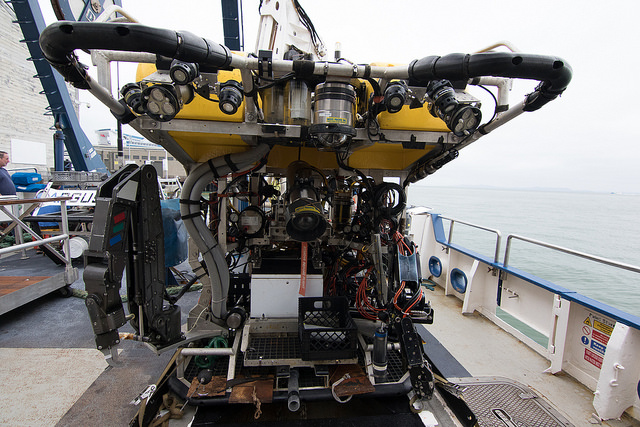 View of the Hercules ROV aboard the E/V Nautilus. Image: Ocean Networks Canada