Over the past week we’ve seen mysterious picture frames popping up around town with the hashtag #PoseVancouver. Vancouverites love a good photo opp, so there was no need to tell them twice – we’ve seen hundreds of photos posted using this hashtag over the past week.

Today, Oakridge Centre revealed that they were behind the famous frames. The iconic retail centre has recently launched their new campaign Only Oakridge, which features masterworks from the National Gallery of Canada, representing high art and high style. Following the theme of their new campaign, Oakridge dropped gold frames with the hashtag #PoseVancouver throughout the city, with the goal of taking the campaign beyond Oakridge and engaging the community in creating their own piece art. Over the past week, the frames and hashtag #PoseVancouver captured the picturesque city views and the creativity, beauty and style of the people in it. 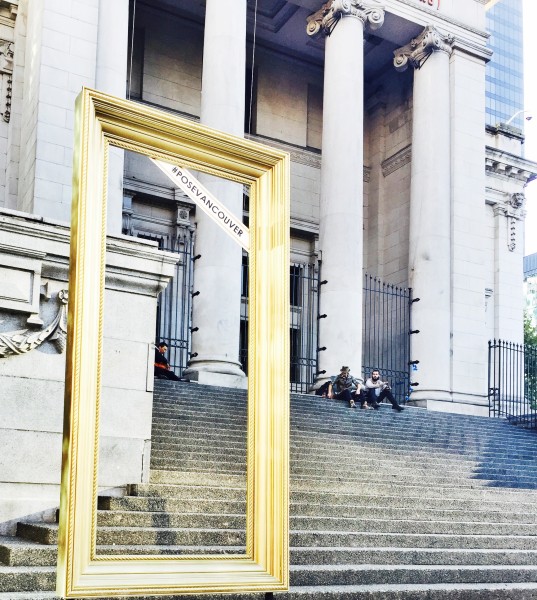 This morning the hashtags were switched out to #OnlyOakridge, with the announcement that Oakridge will be holding three giveaways over the next three days.

In the next three days Oakridge will be doing giveaways for $200 gift cards to Oakridge Centre. All you have to do is post a photo with one of the frames and hashtag #OnlyOakridge to be entered to win. Two winners will be randomly selected each day.

The giveaway hours are as follows, so make sure to have your pose and photo ready to go:

Want to be a part of the Only Oakridge Campaign? On Sunday, October 18th Oakridge is inviting Vancouverites to Oakridge Centre to have their photo taken professionally with the lifesized Only Oakridge frames. During this photo shoot, the public will be able to recreate the new ads by posing with featured artwork, Souvenir of Loch Lomond by Gustave Doré, from the European art collection at the National Gallery of Canada. This unique opportunity will allow participants to be a part of the fashion, art, and style of Only Oakridge.

Follow Oakridge Centre on Twitter and Facebook for real-time updates on the giveaways and to see if you’re a lucky winner. You can also check out the other exciting events and activities Oakridge is hosting as a part of the Only Oakridge campaign at Oakridgecentre.com, or stop by the mall at 41st & Cambie.