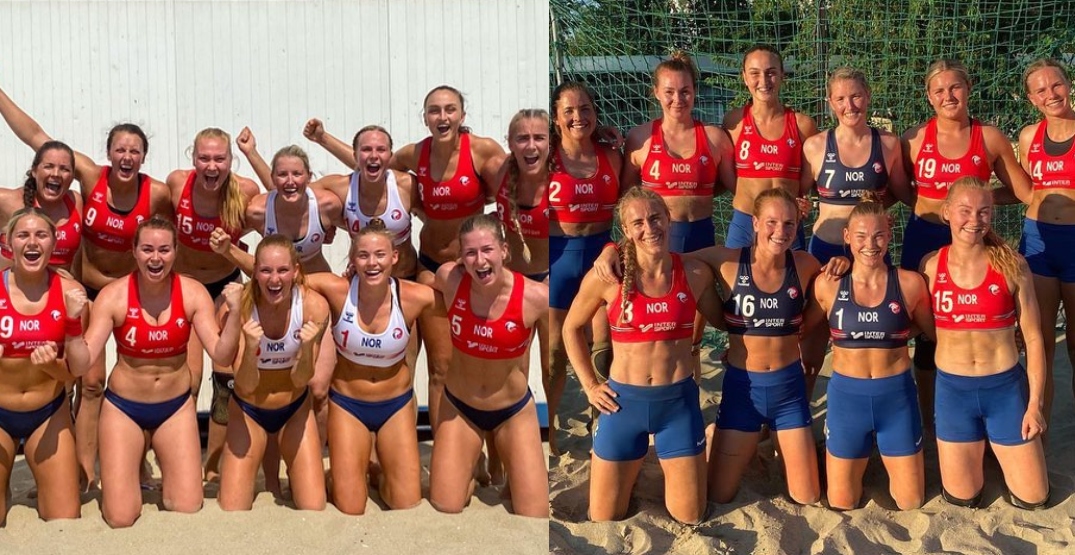 Norway’s women’s beach-handball team has been handed a combined €1,500 ($2,240 CAD) fine by the European Handball Federation for refusing to wear bikini bottoms during a match.

The Norwegians dared to wear tight-fitting shorts during the bronze medal match at the European championships in Varna, Bulgaria this weekend.

“The Disciplinary Commission at the Beach Handball EURO 2021 has dealt with a case of improper clothing,” the European Handball Federation announced.

The shorts violated the athlete uniform regulations, which are different for men and women.

According to the International Handball Federation rule book, uniforms for men’s teams must consist of “tank top and shorts,” with shorts remaining 10 centimetres above their kneecaps.

Women’s teams, on the other hand, must wear “tops and bikini bottoms.”

“Women should wear a bikini where the top should be a tight-fitting sports bra with deep openings at the arms. The bottom must not be more than ten centimetres on the sides,” the regulations say, according to Insider.

Men’s shorts, on the other hand, must not be “too baggy,” and remain about 10 centimetres above the kneecap.

The ruling has made international news, with many calling it out as an example of sexism.

“It was very spontaneous. We thought that ‘now we just do it, then we will see what happens,” Norwegian player Katinka Haltvik told NRK. Haltvik added that the team asked to wear shorts earlier in the tournament, but were denied.

“I hope we get a breakthrough for this and that next summer we play in what we want,” she added.

“We are happy to pay the fine if that was what it was about,” Lio told NHK.

“We have contacted them and worked for this for several years. We have raised it at the Congress and we have been promised that this will be sorted out. Still, nothing happens.

“It’s just sad for the ladies to have to deal with this.”