Lonsdale Avenue in North Vancouver will be receiving a slippery makeover during the early morning hours of Saturday.

Final preparations are being made by the Utah-based Slide The City organizers for a 1,000-foot-long (330 metre), gravity-assisted slip-and-slide down one of the most scenic arterial streets in the North Shore.

But if you are looking to participate in tomorrow’s event and don’t already have a ticket, you are out of luck.

In an interview with Vancity Buzz, Event Director Rachel Thomas said all 6,000 tickets were sold out more than two months ago, making it the largest single-day Slide The City event in terms of attendance numbers. Tickets went on sale in mid-May and officially sold out on June 2. No tickets will be sold at the site on the day of the event.

There has been one slight modification to the course design since the event was first approved by North Vancouver City Council, but the length of the three-tube slide remains the same.

“We moved the slide’s starting and end points,” said Thomas. “Originally, it was going to end on 3rd Street, but now it is ending on 4th Street and the start line will further extend up into the Victoria Park area.”

Thomas adds that the downhill route on Lonsdale Street is one of the most stunning sites the company has ever used.

“The City of North Vancouver is absolutely stunning, and Lonsdale Street in particular has an amazing slope with a nice run out at the bottom… the view is just spectacular. You get a nice view of the region, the SeaBus coming in and the downtown Vancouver skyline. It’s an ideal spot.”

Approximately 100 volunteers from the Canadian Cancer Society, Slide The City’s charity partner, are involved in tomorrow’s slide operations. They will be led by a team of 11 staff members from Utah and a team of local contractors.

A 52-foot-long semi trailer that travels from city to city contains all the equipment and materials needed to execute the event. Fifty thousand gallons of water for the slide will be trucked in from a fresh spring in Abbottsford, treated with chlorine, and recirculated throughout the day using a system of pumps and hoses from the bottom of the slide to the top of the slide.

Set-up will begin at approximately 2 a.m., with everything operational by 6 a.m. and testing starting at 8 a.m.

The slide will be open from 9 a.m. to 8 p.m., which is an additional four hours of sliding time to the original proposed schedule. VIP premium ticket holders can slide at anytime of the day and have their own dedicated sliding period from 9 a.m. to 1:30 p.m., while triple slider and single slider ticket holders will be able to slide from 1:30 p.m. until closing time.

Thomas said she has enjoyed working on the North Vancouver project and the municipal government, and hopes to return to the city next year with an even bigger event.

“I’ve loved working with the City of North Vancouver, they are so well organized. It’s a great city and I’ve had a really great experience. I would be thrilled to come back next year and hope all the participants in the city will want and welcome us back. Hopefully we can push for a two-day event next year.”

While this year’s North Vancouver’s slip-and-slide event is sold out, Thomas is still encouraging locals to come down to watch the sliders and partake in the festivities. The event is a part of the city’s Car Free Day event between 3rd Street and Cates Court.

“Slide The City is unlike anything else out there. It’s hard to imagine it when you say a thousand foot slip and slide, so it’s all about coming out and enjoying this new and unique experience.” 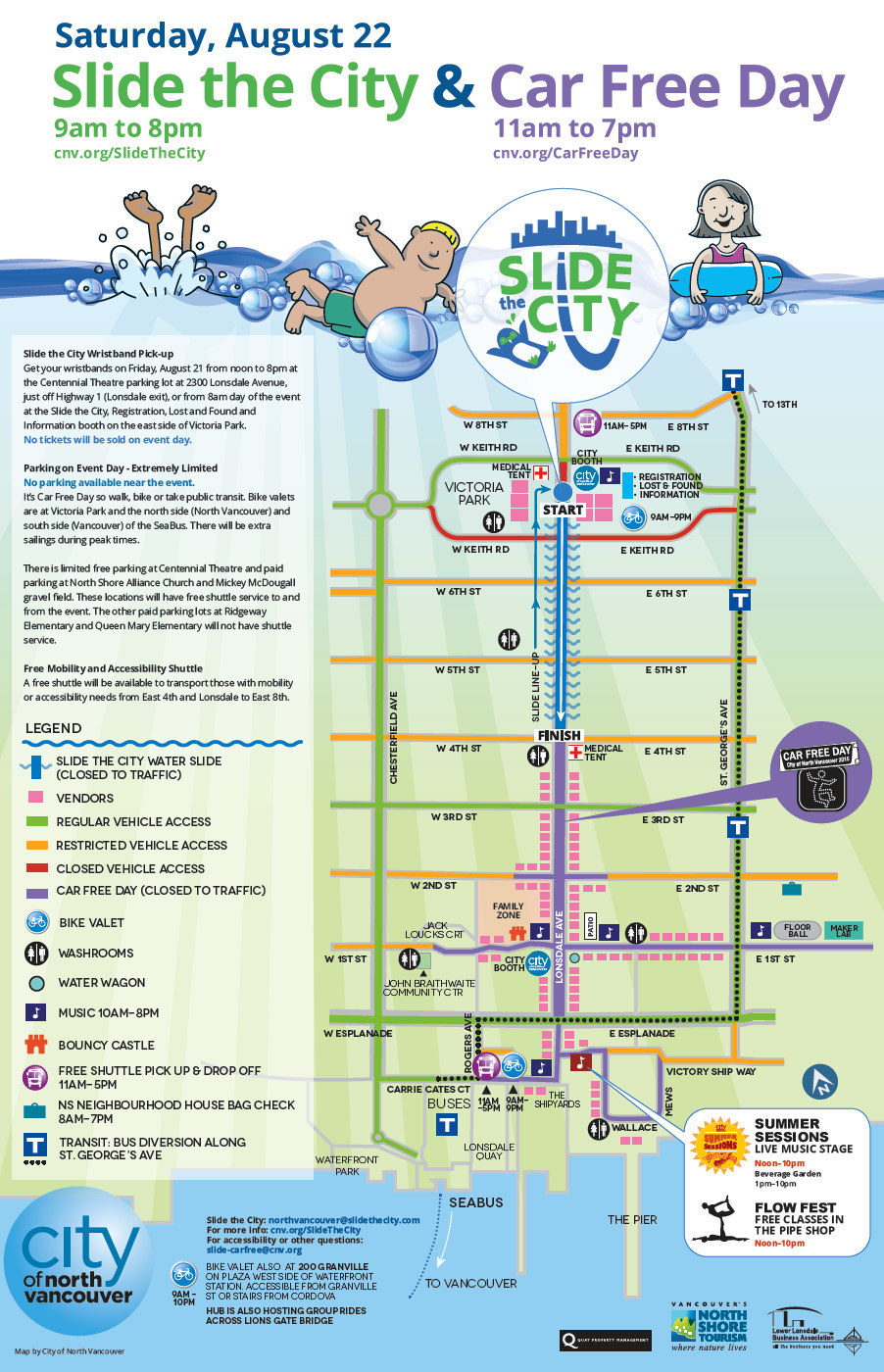