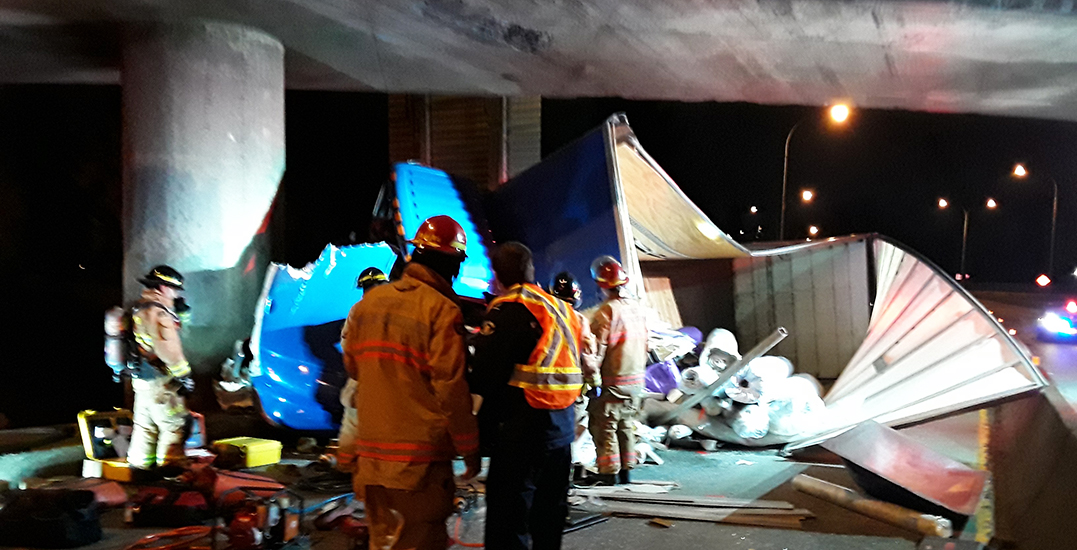 Part of Highway 1 in North Vancouver was closed due to a crash that occurred during rush hour on Friday morning — causing traffic chaos across the region.

The North Vancouver RCMP says that Highway 1 is closed moving westbound. The accident occurred “at the bottom of the cut, by the Fern St. overpass.”

Happening now: #Hwy1 Westbound in #NorthVan is currently closed due to an accident this morning at the bottom of the cut, by the Fern St. overpass. Please choose alternate routes. Check here for updates throughout the morning. pic.twitter.com/4hfZWqsn2r

Drivers should expect delays and are being asked to use alternate routes, if possible.

Photos shared by police show what appears to be a truck that was heavily damaged during the crash. Part of the overpass has also been damaged and at this point in time, it’s unclear whether anyone was severely injured.

We are in the early stages of this investigation and are unable to provide details about the cause of the crash. The structure has been damaged and will need to be inspected to ensure it is safe before it can reopen. We will provide timeline updates as soon as possible. pic.twitter.com/rH4KIgUoyk

“The structure has been damaged and will need to be inspected to ensure it is safe before it can reopen,” says the North Vancouver RCMP in a Tweet.

RCMP say that they’ll provide a timeline for reopening as soon as possible.