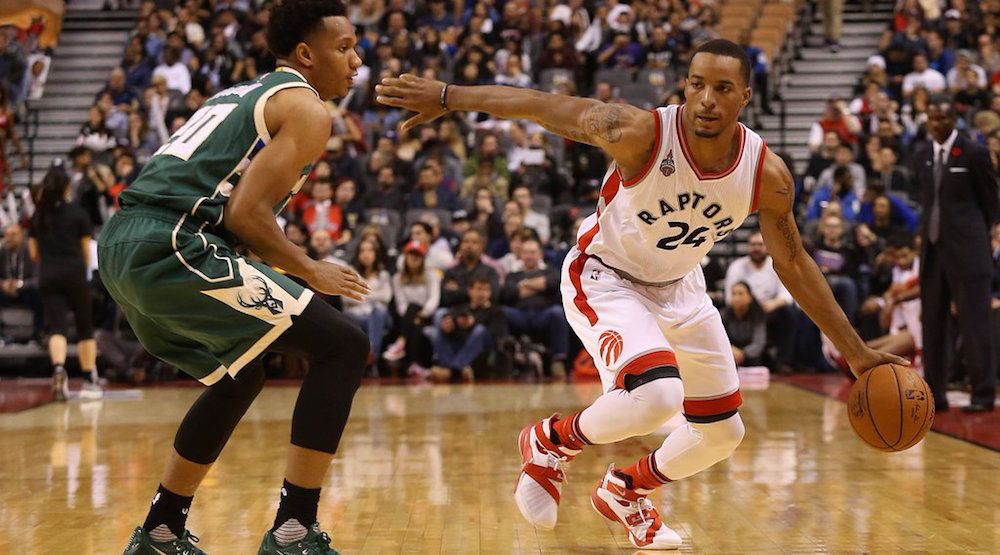 The Toronto Raptors need Norman Powell in order to have a shot at the NBA Finals.

Sounds extreme, but Powell proved as such in Game 5 on Monday. The 6-foot-4 guard has stepped out from behind the shadows of the Raptors’ key players and has been a reason Toronto holds a 3-2 series lead over the Milwaukee Bucks.

The 23-year-old made his presence on the court felt, helping the Raptors dismember the Bucks 118-93 last game. Leading his team in scoring with 25 points, Powell was perfect from beyond the arc, hitting all four of his three pointers.

Powell rode the bench most of the season only starting 18 games throughout. Now, when big performances are needed most, he’s been pushed into a starting role.

“So many times you’re so concerned about DeMar (DeRozan) and Kyle (Lowry), rightfully so, that next spark plug, that next guy, that next instigator is the guy,” Casey told reporters at his post-game press conference. “In this series he’s been the x-factor.”

Norman Powell is the first #Raptors player not named DeRozan or Lowry to score 25+ points in a playoff game since Chris Bosh had 39 in 2008. pic.twitter.com/MMF5Jt7aYm

If the Raptors move on to play the defending champion Cleveland Cavaliers, they’re going to need Powell to continue to be that game changer.

Simply put, the Raptors need him for a deep playoff run.

Casey said it right. Teams know what DeRozan, Lowry, and Ibaka can do, they scheme around those players attempting to take them out of the equation. On top of that Lowry is playing with back stiffness and who knows if that will slow him down as the playoffs continue.

Powell is a player that the Raptors can plug into the lineup, that can take the heat off the big names.

When Norman Powell is in the #Raptors starting lineup, the defence clamps down pic.twitter.com/jxgA891fnG

The San Diego native brings a certain swagger both on offence and defence. In fact when Powell starts the Raptors defence plays better, including a drop in opponents’ shooting percentage by 3%.

His confidence is overzealous, it oozes from him every time he touches the ball and his will to continue to prove he has what it takes is what separates him from many of the already proven players on his team.

All that is showing to be beneficial for the Raptors. You can see it when Powell chases down his man, how quick he is in transition, and how his shots fall one after another. It’s destructive, and the Bucks, the team that drafted him, felt the full force in Game 5.

“It’s just constant reps day in and day out, trying to tweak it here and there, and finding what’s most comfortable for me, and shooting with confidence,” Powell said post-game.

A team can go far with a player that believes in himself and feels comfortable enough to shoot the ball.

With a career postseason high of 25 points and a 72% field goal percentage, it was pretty evident that the offence ran through Powell in Game 5. It took the pressure off both DeRozan and Lowry allowing the two to become play-makers rather then having to carry the team with their scoring. The trio could easily become a triple headed beast with even more help from Ibaka, who on his own had a great Game 5.

Remember that Miami Heat team just a few years ago, with LeBron James, Dwayne Wade, and Chris Bosh? Their team was dominant, no one could handle three dynamic players all on the court at once. Toronto has something similar in DeRozan, Lowry, and Powell. If they move on to the second round they will need a skillful and confident starting five to slow down Lebron and Kyrie Irving.

We’ve seen the awakening of Powell and his ascendance to impact player status. His confidence is peaking, and right now is the time to play him alongside the team’s best players.

The Raptors will attempt to win the series against the Bucks in Game 6 on Thursday.