It’s one of the main targets of the relentless “No TransLink Tax” coalition lead by the Canadian Taxpayers’ Federation (CTF) and B.C. director Jordan Bateman.

The coalition has wasted no time designing their website to capitalize on riders’ sentiments and paint TransLink as a wasteful organization, and the CEO’s high salary is at the front of the criticism.

If you look at the image above, you can see Ian Jarvis’ salary is being compared to the salary of CEOs of other transit operators. How is it not disconcerting? An unelected in-charge, making over $450,000, earning this taxpayer-funded salary while managing a taxpayer-funded authority, is not an attractive prospect by any means.

But it shouldn’t be as simple as that. By that, I mean to look at the context of the comparison, which just might be hidden between the lines. It may not easy to realize that there’s something missing and questionable in this picture.

Why is Seattle being represented exclusively by Sound Transit?

Sound Transit is a name you might see when you drive into Seattle from Vancouver, because it operates the bus rapid transit routes and stations you see while driving on Interstate 5. They operates numerous express buses and some rail lines, but it’s not the largest transit operator in the Puget Sound nor by any means the one carrying the most ridership. That would be King County Metro, which operates Seattle’s inner-city buses and carries four times the daily ridership that Sound Transit does.

There was one recent “No”-side supporter I spotted on Twitter that did account for King County Metro’s existence, and criticized TransLink for paying its top seven earners 212 per cent of what the top 7 earners at either Sound Transit or King County Metro earn. However, TransLink still operates a wider variety of services over a larger service area, and our system carries more than twice as many daily weekday riders as both of the Seattle transit agencies put together: 1.2 million on TransLink versus 496,000 between both King County Metro and Sound Transit.

This is partly because Sound Transit and King County Metro are just two among the 10 different transit operators servicing the Puget Sound. With transit providers split up and each of them smaller in the Seattle region, to put the pay rates up side by side with Metro Vancouver’s should not and does not result in a fair comparison.

A quick look shows us there are many transit operators in the Puget Sound on top of Sound Transit and King County Metro. This includes:

On top of the nine listed here, Washington State Ferries is also a vital commuter link much in the way our SeaBus is. Each of these operators has their own CEO.

In Toronto, there is the Toronto Transit Commission, which operates the subway, streetcar and bus routes inside Toronto city. Its CEO is Andy Byford, and he gets paid $150,000 less than Ian Jarvis. You could take that number for granted and think, “why do we need to pay our CEO that much more than Toronto pays its CEO?”

But what the CTF doesn’t tell you is that Andy Byford is not the only CEO of a transit authority in Greater Toronto. He’s actually one of nine CEOs.

Every other city in Greater Toronto operates its own transit agency – i.e. Mississauga (MiWay), the York Region (YRT), Burlington (Burlington Transit), Brampton (Brampton Transit) – and they each require a separate CEO and administration team.

There is also a long-distance commuter rail network, but it is maintained by a separate operator (GO Transit) with a separate fare structure and a separate CEO. On top of everything, there is a TransLink-like authority called MetroLinx that is responsible for GO Transit, a region-wide tap-card payment system (just like Compass), and decisions on capital-intensive rapid transit projects. There is, again, a separate CEO.

Well, that is one of the things the “No” side has failed to account for in its claims. In other cities in Canada, the moment you cross a municipal border and head into another municipal jurisdiction, you need to transfer to different operator’s bus (which may even require an additional fare to ride).

That has never been the case in Metro Vancouver, as the transit administration model we have adopted is centred around consolidation and thus simplicity. You ride on TransLink whether you are in Vancouver or in Surrey. You might have to pay for zones during some parts of the day, but you do not ever have to pay two fares for two different systems. 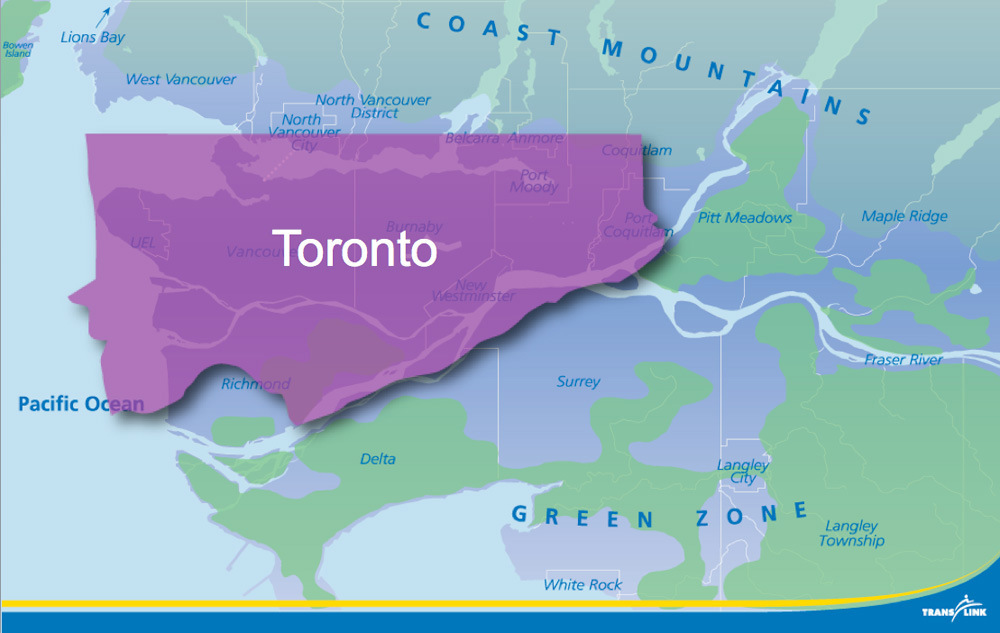 Here in Metro Vancouver, we have had a single operator in charge of operating transit for the entire region throughout history.

The B.C. Electric Railway provided rail and bus service as a single operator – so did B.C. Hydro when they were in charge, followed by B.C. Transit’s Greater Vancouver division when that was incorporated.

TransLink has continued the same advantageous, simple model – but expanded it by not just taking charge of transit but also taking charge of regional roads, bridges, pedestrian and cycling facilities, and other infrastructure throughout our region.

I personally think it is because this is what we have been used to for pretty much forever, that we take it for granted and never really consider or account for the benefits of this model.

TransLink has become, to everyone else, just like any other transit agency – and when our CEO is being paid on the higher end of a six-figure salary, that is considered in a very negative light even though we perform with 1 CEO what other metropolitan areas perform with 4-9 of them.

Below, I have compared the transit systems serving Canada’s four largest metro areas (Toronto, Montreal, Vancouver and Ottawa-Gatineau). When you add it all up, this is how we actually compare to other major cities in Canada:

Here’s the full spreadsheet data (based on the most recent figures and statistics). Click on the image for an expanded version:

Notice how when I put up the per-capita measurement for the TTC’s CEO only, it comes up as a lot lower than TransLink and looks like a better deal. This is what I mean about the ‘controversy’ being a matter of perspective.

If you compare the TTC (the inner-city transit operator) only, it definitely looks great. But that is because you have left out GO Transit’s commuter rail service into Toronto, Metrolinx and all the other transit operators in the suburbs that surround the City of Toronto.

The deceptions of the “No TransLink Tax” campaign

At this point, it’s not just a matter of who has more influence on the general public, but also about how they’re exercising that influence.

For one, the leaders behind the “No TransLink Tax” effort have decided to tell us one thing and not tell us the other. They are trying to convince us that TransLink is even comparable to Toronto’s TTC, Montreal’s STM and other individual city transit agencies when that is simply not the case.

They are outright lying to us, and we do not even know it because the concept of TransLink as a unique, single, region-wide entity – and advantageous because of it – has not been established with the voter base.

In case that was not enough, here are some of the other misguided claims that “No TransLink Tax”, the Canadian Taxpayers’ Federation and other proponents on the “No” side have used to portray TransLink and transit expansion in an unjustified negative light that I would like to expose:

1. Excessively sized board of directors?

The CTF has criticized TransLink for having 66 of its 177 transit police officers make over $100,000. By comparison, Toronto doesn’t have a dedicated Transit Police force, but of the city’s civil servants who share the responsibility of patrolling transit along with the TTC’s transit special officers force, more than 40 per cent make salaries of over $100,000. That’s 2983 police officers.

4. Further TransLink cuts can pay for $7.5-billion in improvements?

The CTF has claimed that the amount of costs TransLink can cut will pay for the improvements outlined as the referendum outcomes. Proceeding with taming the CTF’s alleged “inefficiencies” would raise only about $1.9 million annually, less than 1 per cent of what is needed to proceed with the $7.5 billion, 10-year plan.

The CTF has claimed that we do not have to worry about new revenue sources for transit expansion because revenue growth among TransLink, Metro Vancouver and the 21 municipalities is projected to increase at 4.8 per cent a year over the next decade.

If the expenses being borne by the region – which the CTF seems to have ignored completely – were not also projected to rise at this rate or faster than, then there would not be a need for a transit referendum in the first place.

TransLink is the most cost-efficient transit agency in Canada

I am honestly not sure, considering how much leverage the “TransLink is wasteful” message has on the public, how many people would be tempted to believe it if I were to say that TransLink is actually the most cost-efficient transit agency in all of Canada.

This also accounts the recent news that TransLink is now paying two CEOs as Ian Jarvis has resigned, but is continuing to earn his existing salary as an advisor (notwithstanding that he won’t even be getting a severance package). There is no question that this is fuel into the fire for the no campaign.

But the numbers as I have presented above just do not lie. Even when interim CEO Doug Allen’s pay is also counted, residents of Metro Vancouver are paying less per capita for their top-in-charge than residents of Canada’s other large cities. And under normal levels we pay our CEO less than the other operators do per amount of transit service they manage.

With CEO pay per capita, Metro Vancouver and TransLink are matching or thoroughly outperforming Greater Toronto and Greater Montreal, even if you do not include the separate operators of the commuter rail lines heading into the city from suburbs.