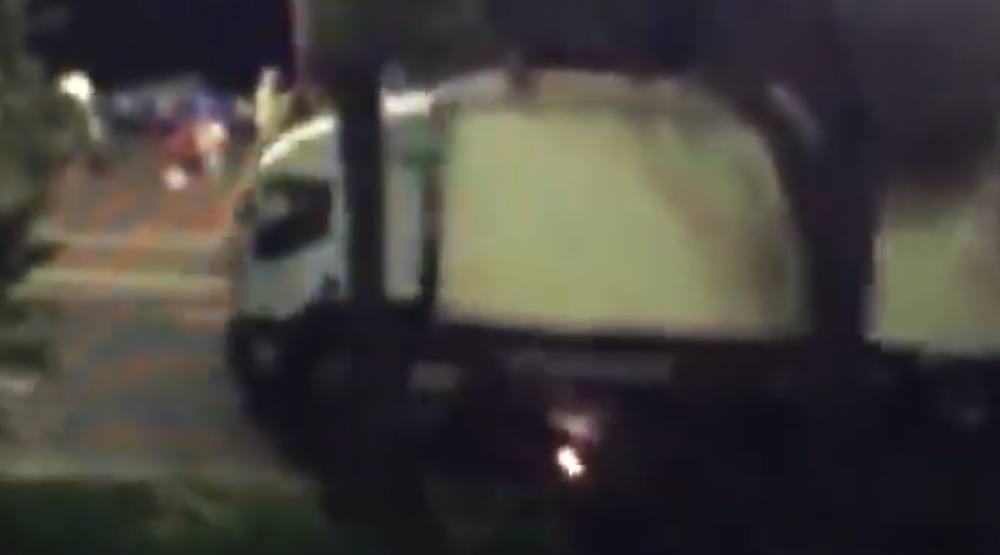 At least 80 people have died and hundreds more have been injured after an armed man drove a truck into a crowd of people in Nice, France.

According to CNN, the incident occurred at approximately 10 pm local time during Nice’s Bastille Day fireworks display along the French Riviera waterfront. The man drove the trailer into the Promenade des Anglais, which had been closed to all vehicles and crowded with revellers at the time of the incident.

Warning – disturbing footage: The video below shows the start of the attack as the tractor trailer accelerates its speed and rams into the crowd (camera view is then obscured by trees).

No group has claimed responsibility for the attack at this time.

This is the third major terrorist attack in France in a year and a half. In January 2015, 12 people working at French satirical magazine Charlie Hebdo were killed when a terrorist barged into the publication’s Paris office and opened fire.

And just last November, 137 people were killed when three suicide bombers and shooters attacked Paris’ Bataclan theatre during a packed concert, the Stade de France during an international friendly match, and a popular Central Paris district with cafes and restaurants.

Neighbouring Brussels in Belgium was also attacked in March in response to a man hunt for the Paris attack suspects. A total of 32 people were killed in multiple explosions at Brussels’ main airport and on the metro train system.

During the early morning hours in Nice, French François Hollande announced that his government is extending the country’s state of emergency by three months, which initially began after the November attack. Additionally, another 10,000 military police officers will be mobilized in city streets.

Canadian leaders are offering their sympathies to the latest attack in Nice:

Canadians are shocked by tonight’s attack in Nice. Our sympathy is with the victims, and our solidarity with the French people.

Awful news coming out of an attack in Nice during #BastilleDay celebrations. We stand with those injured & the families of the many killed.

This is just horrible. Thinking of all those involved and their families. #Nice #France https://t.co/l5Ki1xT6Hu

Sickened by the loss of life in Nice. Toronto’s thoughts are with the people of France.

Shocked and saddened by the tragedy in #Nice. Condolences and support to the victims’ families of this tragic event. #BastilleDay

Deeply shocked and saddened by attack on #BastilleDay in #Nice. My thoughts with victims and families. Solidarity with France

Canadians are shocked by tonight’s attack in Nice. Our sympathy is with the victims, and our solidarity with the French people.

[1/2] Terrible news out of Nice, France today. Thoughts and prayers with victims and their families. #PrayForNice