A quarter of the NHL season has transpired so here’s a quick update of what’s happening and predictions of what’s ahead in the standings.

The Devils are on fire right now as they should be. Finally, Jacques Lemaire has a team with half a brain to play his ingenious trap. The Caps are just an exciting team overall. They have trouble keeping pucks out of their net but when you have Ovechkin, this is neutralized. Buffalo is having a short hot streak. Pittsburgh will undoubtedly finish top in the Conference, and probably the league. The Rangers and John Tortorella’s “Safe Is Death” has brought offensive priority and some excitement. If Gabby stays healthy, they will be fine. The Atlantic division is competitive, rounding up with Philly and the rising Islanders all vying for playoff spots. The Islanders won’t make it.

They’re a one-line team. The Thrashers may actually be for real now that Kovi’s back. Stacking up on draft picks the past few years has them a future formidable force if they bring in the right veteran support. Tampa is freakin Tampa. There’s so much talent on the Lightening roster but they are underperforming once again. They will be buoyed by Vinny’s success and right now he’s struggling. Boston is chillin and will be back up soon. The Sens, Habs and Leafs are vying forCanada’s crappiest team. My money’s on the Leafs. All three Canadian East teams are overhyped and overpromised. The Sens got murdered on the Heatley deal. Bob Gainey is overrated and fans are ludicrous to expect a team led by Gomez and Gionta, without a trap system and Brodeur-like performance, to succeed.Florida andCarolina aren’t even noteworthy. 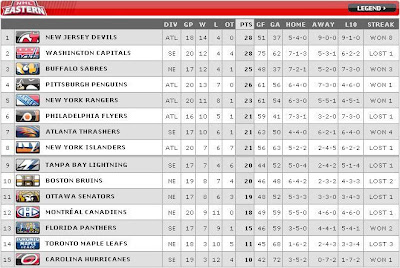 San Joseis atop the standings as predicted by most. Look for them to duke it out with Pittsburgh for top dog in the league.Coloradois definitely looking at a nosedive down, out of the playoffs. Their depth is limited and Craig Anderson will hit a wall.Chicagois going through a maturing phase and will be bolstered by Hossa’s return to finish 2nd in the West. LA has their talented younguns maturing with King Kopitar leading and the resurgence of Ryan Smyth. They will be a formidable force for years but may miss the playoffs this year.Calgarysucks.Dallasis fluking.Detroitwill move up a few spots but the dynasty is dead.Columbuswill finish higher than 8th once Mason finds his game.Phoenixwill get hurt by distractions shortly.Vancouveris chillin right now. Once they get Danny back and Louie’s in top form there will be winning streaks, especially with 13 of the next 17 at home.Edmontonsucks.St. LouisandAnaheimwill finish on the borderline for the playoffs. Minny and the Preds will be in the Western basement this year. 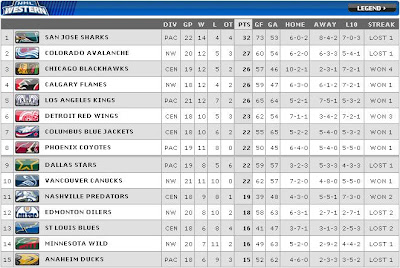 There you have it, an analysis of the NHL teams up to this point.