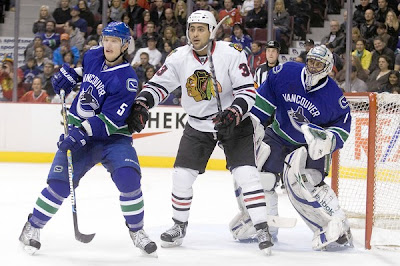 Well with the Jaroslav Halak show ending the Washington Capitals dreams last night, the 1st round of the playoffs is officially over!  Here is a list of five things I’ve learned from the 1st round (in no particular order):

For the 1st round of the playoffs I went 4/8 with my predictions. I would have been better off flipping a coin when making my selections. Well for round 2 I’m back and with a vengeance. I will be providing a pick verses a coin, If that coin beats me I think I might have an aneurysm. Without further ado here are my round 2 picks.

I was a moron to think that the sharks could change their ways. The Sharks aren’t finishers; they were getting 50 plus shots against a very average Avalanche team and still barely squeaking out wins. The Avalanche managed to keep the top line of Heatley, Thornton and Marleau at a combined -7 for the series, what is going to happen when that top line has to go against Mike Babcock and reigning Selke winner Pavel Datsyuk? The Red Wings are closers, as seen in there dismantling of the Coyotes in game seven on the road. The Sharks will choke again, the Red Wings will make the Western Conference finals, again.

The Canucks had the Blackhawks down and out last year and let that series slip away (ohh the horrible memories). Last year it seemed as if the Canucks were worried that they couldn’t go goal for goal with the Blackhawks, but with Hart trophy finalist, Henrik Sedin, leading this year’s Canucks attack (an offense that had the 2nd most goals for this regular season) the Blackhawks should be very worried.

Flyers  (7)
From the round one results we can see that anything can happen in the East.  The teams are nowhere as complete as the teams in the west. This leads to series being able to be won by the team who has the hottest goalie.  Right now Tukka Rask, Jaroslav Halak and Brian Boucher are all playing out of their minds while Marc Andre Fleury is doing the Luongo thing where he plays decently but makes the big saves in the key moments.  Logically, Sid the Kid and the Penguins should have no trouble advancing past Montreal and the Flyers should be too banged up to compete with the Bruins.  I’m just hoping that logic pays off for me, but I’ll probably be wrong.

That wraps up this column, I now have to get to my 2nd job so I can pay off all my gambling losses from the 1st round (You know if gambling was legal and all).
VancityBuzz.com