With the NHL players still locked out by their owners, many fans have begun to turn their back on the whole debacle. Some analysts were saying “it looked like no end was in sight”. I was about ready to turn my back from the NHL a well. Then something happened. Something big happened.

Today the NHL owners made an offer to the NHLPA that is built around a 50/50 split of hockey related revenue. This has been one of the core issues keeping the two sides apart. Here are some more details from this offer:

An NHLPA rep has said that they have a conference called planned with board members and are expected to respond “sooner rather than later”.

Is this the deal that brings hockey back to us? 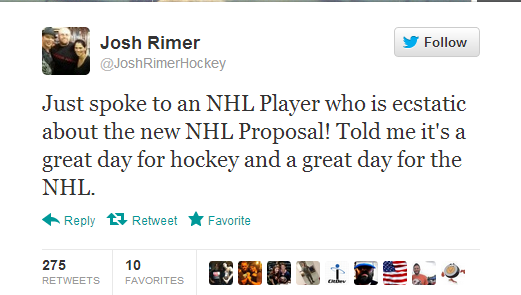 More news coming from “hockey insiders”. This time it is via The Hockey News reporter Jason Kay.

I’m not sure who Jason Kay’s sources are, but damn do I like what they told him.

Another update. This time from Bettman himself. He said they tabled the offer today with the intention that it will be negotiated for 8-10 days. Then after 10, they will have room to do a one week training camp.