NHL All-Star Weekend began in earnest last night, as the best the NHL has to offer, and John Scott, competed in the Skills competition. In years past, this has often been the best part of the proceedings, with players mic’d up and good vibes abound.

It’s become common practice to rip on the All-Star Game, but for the casual fan and those that appreciate a little more insight into the personalities of their favourite players, this weekend provides a unique experience. Just because it’s a silly event with absolutely no bearing on the rest of the season doesn’t mean we can’t all have a little bit of fun with it.

Take it away, Roberto Luongo:

Just picked up a little something for ya @68Jagr for the 3-on-3 tomorrow. Hope you wear it…… #NHLAllStar pic.twitter.com/7gyeQsmfnj

Much of the talk going into the night was around the Pacific Division captain and controversial figure John Scott. In an interview before the game, he joked around with former teammate Brent Burns and made sure the fans at home knew he was happy to be part of the festivities.

John Scott cracks up laughing after Patrick Kane gets booed by the Nashville crowd. #NHLAllStar pic.twitter.com/2ub2KdG8L6

The fun obviously didn’t stop there and during an interview with Johnny Gaudreau, teammate Mark Giordano copied a recent youngster from Ottawa with this awesome sign.

The format for the fastest skater changed a little this year with players going head-to-head for a single point. The fastest skater overall gained another point for their team as well as an opportunity another bonus point should they break Mike Gartner’s 20-year-old record (13.386) for fastest around the rink.

In the first matchup, Red Wings teenage rookie sensation Dylan Larkin was up against the hometown favourite Roman Josi. Larkin set the standard for the night with a blazing fast 12.984, which broke Mike Gartner’s 20-year-old record. 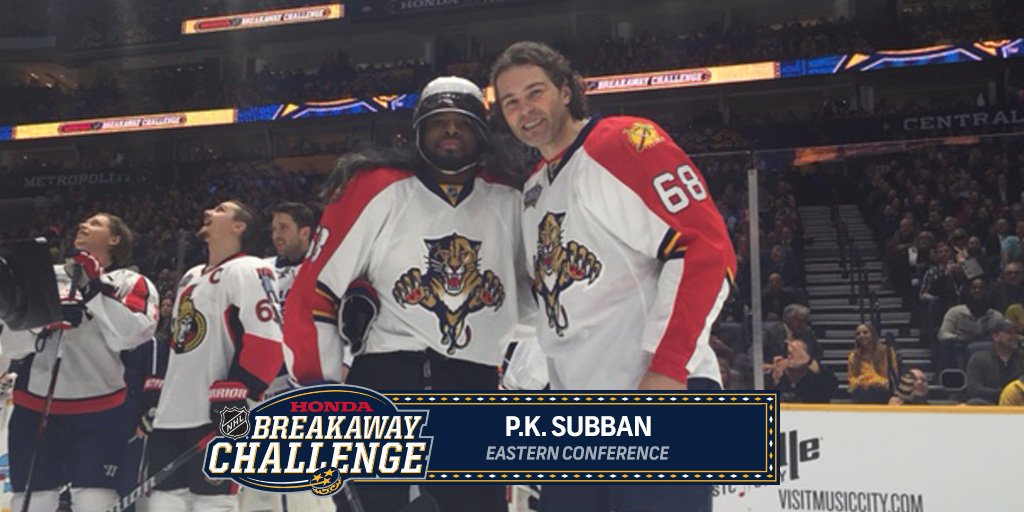 In the past, this event has been a lot of fun, but the personalities this year really brought it. Creativity was at an all-time high. Two attempts for each player led to some incredible sights.

Brandon Saad started things off with a puck juggling routine before paying homage Canucks legend Pavel Bure with a couple stick-to-skate-to-stick dekes in his second attempt. James Neal employed the ol’ hidden puck trick in his first attempt “fooling” Cory Schneider and his second attempt brought out country legend/celebrity coach Dierks Bentley for a 2-on-0.

I get by with a little help from my friends… specifically, @DierksBentley. #NHLAllStar #Preds pic.twitter.com/fUbM1SrbCW

Kuznetsov’s second attempt included a tribute to his captain with a cowboy hat and sunglasses, but he didn’t end up testing the guitar-slinging Pekka Rinne as he missed the net glove side. Matt Duchene donned a cowboy hat to employ the popular lacrosse-style strategy before doing so with just one hand.

The first four shooters were pretty par for the course, but another level was reached with PK Subban and Brent Burns.

The Burns and Pavelski boys have some moves! That was pretty darn cute too.https://t.co/Q096q0XHaw

Subban’s first attempt might have been the most impressive alternating from stick juggling to with a couple volleys mixed in before hitting the puck out of midair. In Brent Burns’ first attempt, he and his son were joined by Joe Pavelski and his son, with Pavelski Jr. leaving a drop pass for Burns Jr. to slot it in a net left empty by a brawling Cory Schneider and Roberto Luongo.

Luongo and Schneider argue over the net "like the good old days" #Canucks #nhlallstar pic.twitter.com/sXTkrCDmKW

If you thought that was good, these two jokers were just getting started. Brent Burns had them turn the lights down in the arena to show a quick “evolution of Burns” montage on the jumbotron before skating in on Cory Schneider with a Chewbacca head on.

PK Subban did his best Jaromir Jagr impression, complete with a lengthy mullet, the classic JOFA helmet, and black pants. He even stickhandled like Jagr and saluted the crowd after his goal!

Subban was crowned the winner and rightly so. If Jaromir Jagr was this supportive, why shouldn’t we all be rooting for Subban?

It was funny:))) I didn't know he's going to do it. P.K.-my little brother 🙂 pic.twitter.com/XFvVjbigWh

Devoid of antics and Star Wars masks, the accuracy shooting contest was relatively uneventful. John Tavares took the crown, hitting the 4 targets in 5 shots in a time of 12.294.

With Benn setting the bar of 16.664, Malkin was 3 for 3 before he paused to encourage the crowd to make some noise. While he clanked his fourth shot off the crossbar, he still managed to beat Benn with a time of 16.179.

It tends to drag on, but the Skills Challenge Relay combines almost every aspect of a hockey game, including one-timers, saucer passing, skating, stickhandling, and as a flourish, goalies shooting the length of the rink.

Daniel Sedin took in this event, given the task of passing pucks into tiny nets.

Yeah, Daniel Sedin misses henrik so bad right now. Won't be at the top of his game.

In a drill tailor-made for him, Johnny Gaudreau was brilliant in the cone drill before a booing Nashville crowd caused a hiccup in Patrick Kane’s stickhandling.

The marquee event of the Skills Competition certainly didn’t disappoint. Coming into the evening, many thought Shea Weber might be able to break Zdeno Chara’s record of 108.8 mph.

Dustin Byfuglien (99.6 mph) beat Aaron Ekblad, but the Florida Panthers youngster should have received the style points, as he sported a “Spacey in space” hoodie for the competition.

Evgeni Malkin showed off some power, unleashing a 97 mph slapshot to give him the win over Tyler Seguin. Next was perhaps one of the better moments of the night. Pacific Division captain John Scott received a standing ovation from the fans and players that acknowledged his humility during the events leading up to this weekend. Steven Stamkos put an abrupt end to said moment by crushing a 103.9 mph slapshot to beat Scott handily.

A standing ovation from the fans and players as #NHLAllStar John Scott makes his first Hardest Shot attempt. https://t.co/t2MRjHyFJb

Up next was Sicamous, BC native and hometown hero Shea Weber. He was up against PK Subban, but there was no way anybody was getting close to Weber save for a certain absent Slovakian giant. Subban jumped the gun on his first attempt and in his second round the radar gun didn’t register. Perhaps a little tampering with the equipment to ensure a Weber victory…?

"If anyone shoots it harder than Weber, just turn the radar gun off really quickly." #Subban

Weber slammed his second shot into the net at a blistering 108.1 mph before chants of “one more shot” rang out around the arena. Weber obliged though he break any records, registering a 107.8 mph shot for the Bridgestone faithful.

The last event of the evening offered the Western Conference an opportunity to make up some ground, but the Eastern Conference, led by Roberto Luongo, Evgeni Malkin, Claude Giroux, and Braden Holtby, were having none of it.

In the first two-minute round, Luongo was a perfect 9-for-9.

The West never really made it close, as John Gibson allowed six goals and the shooters didn’t help out much. Dylan Larkin made a great move to score and finish his memorable All-Star Game on a high note. You can bet he’ll be at a few more of these events in his career.

John Scott led off the final round for the West and after shooting on his first attempt, he employed the once legal spin-o-rama on a mic’d up Cory Schneider. The former Canucks goalie shut the door, but the move from Scott showed again just how much fun he was having.

As I mentioned earlier, the All-Star proceedings have taken a lot of flak over the years, but I thought this was pretty entertaining and probably the best Skills Competition that I can remember.

Personalities like Brent Burns, PK Subban, Jaromir Jagr, and Roberto Luongo were on full display and players like Dylan Larkin and Shea Weber showed by they belong among the league’s best.

The Eastern Conference won the Skills Competition in resounding fashion by a score of 29 to 12 and as the winners, they selected to play in the first game tomorrow afternoon, ensuring the winner of that game has a small break before the final. Be sure to tune in for the NHL’s first 3-on-3 All-Star Tournament tomorrow. The first game between the Atlantic and Metropolitan Divisions starts at 2:00 pm and you can watch it on any Sportsnet channel.

Subban does the Jagr salute pic.twitter.com/9kw78sk5yT