In yet another thriller, the Seattle Seahawks, who were up by 17 points at one point, were unable to hold on for the victory as the Cincinnati Bengals won in overtime by a score of 27-24.

The Bengals continued their winning ways in an epic come from behind victory against the Seahawks. With the Bengals down 24-7 at the beginning of the fourth quarter, quarterback Andy Dalton led his team to score 17 unanswered points to force overtime, where kicker Mike Nugent score the winning field goal.

Seattle played a good game up until the fourth quarter, where they were simply unable to hold the lead, or increase it. Quarterback Russell Wilson, for the second week in a row, was having difficulty with pass rushers in his face. Wilson, who was sacked four times, threw for 213 yards and a touchdown, along with a red-zone interception to Bengals cornerback Adam Jones, who was a big factor on special teams and defence.

Despite facing a stout Bengals defence, Seattle running back Thomas Rawls was able to generate 169 yards on 23 carries, along with a touchdown. His touchdown score, Seattle’s first rushing touchdown of the season, was a massive 69 yard run that looked to be the beginning of the end for Cincinnati. It looked as if the game was sealed when Seahawks linebacker Bobby Wagner ran back a fumble for a touchdown.

The Bengals started their comeback with a touchdown pass to tight end Tyler Eifert, on whom Dalton relied heavily throughout the game, making it 24-14. Dalton followed this up with a five yard touchdown run, making it 24-21. Mike Nugent added a field goal to tie the game at 24 and force overtime, and tacked on the winner to complete the comeback.

The offensive line didn’t allow Wilson with the time that he needed to make plays. He dealt with pressure for the duration of the game. Wilson connected with receiver Doug Baldwin for 70 yards, and threw a touchdown to Jermaine Kearse, who has been his favourite target this season. Tyler Lockett played was less of a factor on offence this week, generating 29 yards on two catches. Tight end Jimmy Graham caught three passes for 30 yards – not the numbers that most people expected when he was acquired in the offseason. 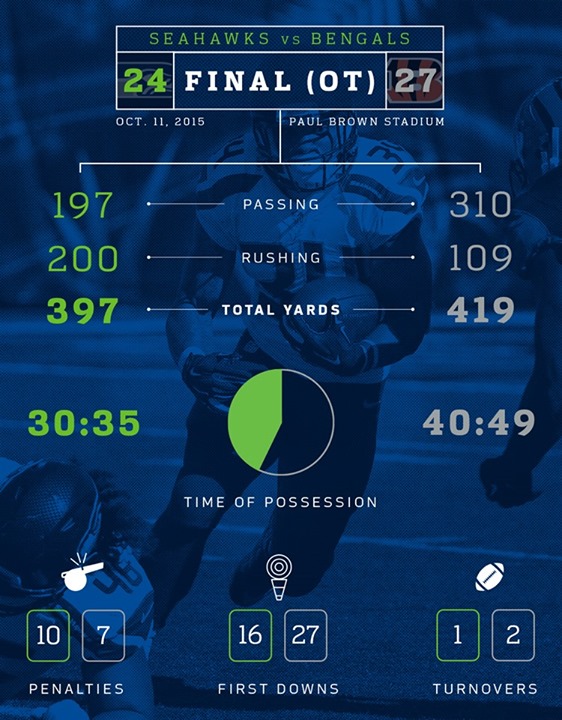 The Hawks defence made plays, but was shredded for 331 passing yards, and over 100 rushing yards. Four Bengals receiver put up a minimum of 60 yards. They put pressure on Dalton, generating four sacks, an interception, and a fumble the Wagner returned for a touchdown. The “Legion of Boom,” which has been the foundation of this defence, is now having difficulty defending against the pass, and only has one interception for the season.

The Seahawks will have to patch up their holes by next Sunday, when they play the undefeated Carolina Panthers.