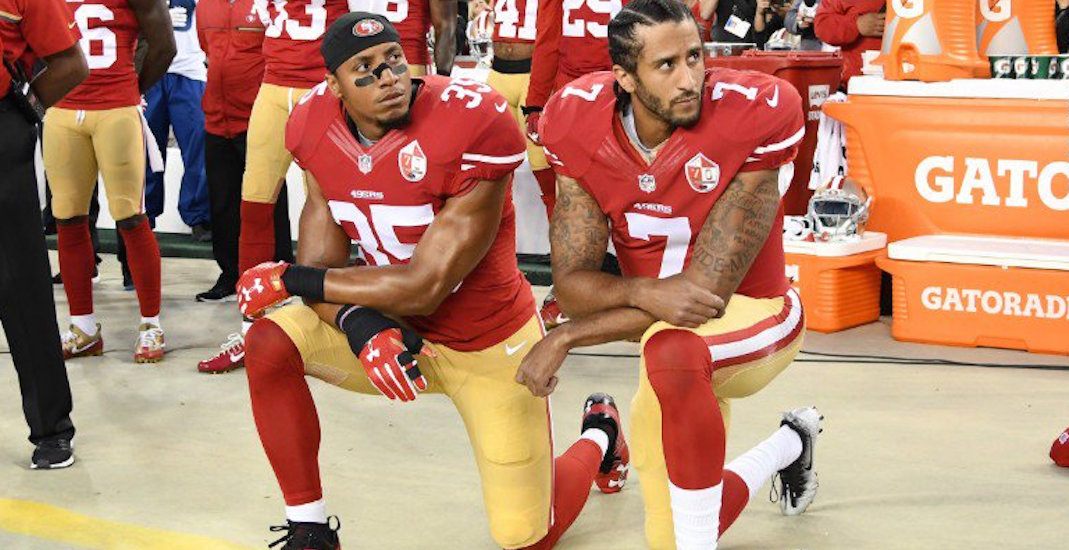 Stand up or stay away from the cameras.

That’s essentially the message from NFL commissioner Roger Goodell, who revealed the league’s new policy on kneeling during the national anthem before games.

Last season, a number of players took the lead of Colin Kaepernick, who first began kneeling during the American national anthem in 2016 as a way of protesting how black people were being treated in the United States.

US president Donald Trump got involved, because of course he did, pouring gasoline on the controversy.

It was the kind of exposure NFL owners wanted nothing to do with.

“The efforts by many of our players sparked awareness and action around issues of social justice that must be addressed,” Goodell said in a statement. “The platform that we have created together is certainly unique in professional sports and quite likely in American business. We are honoured to work with our players to drive progress.

“It was unfortunate that on-field protests created a false perception among many that thousands of NFL players were unpatriotic. This is not and was never the case.”

The new policy will mandate that all league and team personnel “stand and show respect for the flag and the anthem.” For those that don’t want to stand, they will be permitted to stay in the locker room for the duration of the anthem.

The policy appears to have ruffled feathers within the NFL Players Association, as they were not consulted by Goodell and the owners.

Here’s the full policy statement announced by the NFL:

The 32 member clubs of the National Football League have reaffirmed their strong commitment to work alongside our players to strengthen our communities and advance social justice. The unique platform that we have created is unprecedented in its scope, and will provide extraordinary resources in support of programs to promote positive social change in our communities.

The membership also strongly believes that:

1. All team and league personnel on the field shall stand and show respect for the flag and the anthem.

2.The Game Operations Manual will be revised to remove the requirement that all players be on the field for the anthem.

3. Personnel who choose not to stand for the anthem may stay in the locker room or in a similar location off the field until after the anthem has been performed.

4. A club will be fined by the League if its personnel are on the field and do not stand and show respect for the flag and the anthem.

5. Each club may develop its own work rules, consistent with the above principles, regarding its personnel who do not stand and show respect for the flag and the anthem.

6. The commissioner will impose appropriate discipline on league personnel who do not stand and show respect for the flag and the anthem.