I’m not a morning person. Days off usually mean sleeping in and as such, lunch usually happens a little later in the day. Unfortunately for me, it seems like the rest of Vancouver gets up early even on long weekends, or at least they have lunch earlier than 2 p.m. to get at the roast suckling pig at Rainier Provisions, the latest in the Heather Hospitality Group’s Gastown-based restaurants. The pork sold out during the lunch rush and the meatloaf quickly followed. As a replacement, they offered a Sloppy Joe but that’s one sandwich I won’t eat in public without either a change of clothes or a hazmat suit. 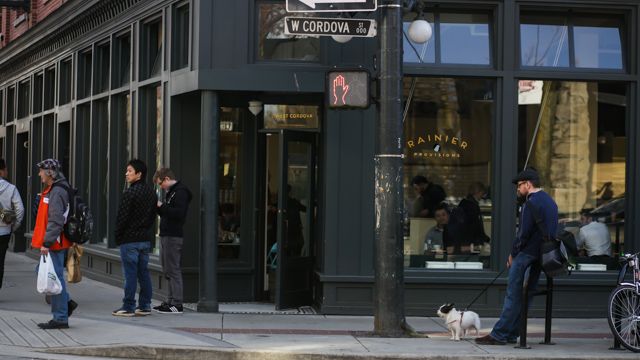 Located at 2 West Cordova in a 106-year-old building, Rainier Provisions looks like the sort of deli you’d only see in Archie comics or King Kong-era New York. Yes, it’s new but painstaking attention to detail has gone into making things look old and lived in. It really matches the menu, like this plate of food looks like it should come from a place that looks like this.  The aesthetics will only improve with actual age. 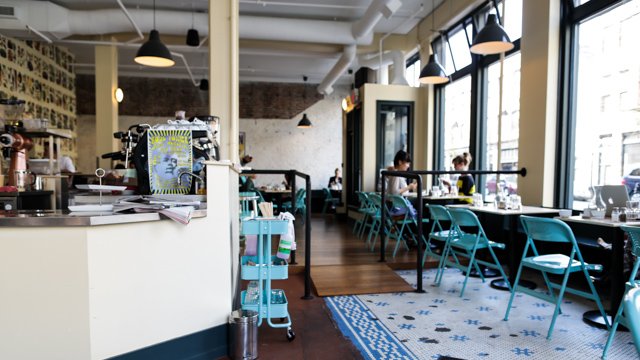 Okay, it’s rather hipster-y in here. All the signs are there: beards, flannel, people dressed and styled entirely from Instagram filters and Taylor Swift’s latest music videos. That isn’t to say the place isn’t charming, though. It smells amazing and the staff, despite having iPads strapped to their arms (apron pockets would probably be a better idea), are attentive and friendly. 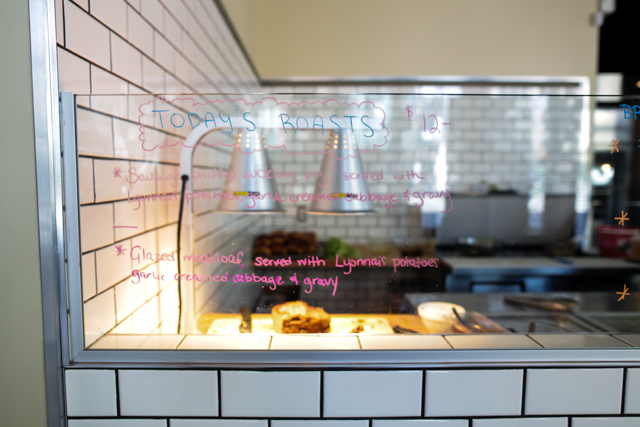 I assume that since the menu is printed on paper and written in neon marker at the deli counter, it changes according to the chef’s vision, the market and the season. On this particular day, the roasts were sausage stuffed suckling pig or a glazed meatloaf, served Lyonnais potatoes, garlic creamed cabbage. Neither was available so I went with the fish pie ($9) as well as a side kale Caesar salad ($4).  If you’re wondering if they run out of some menu items at lunch but have more for dinner, they’re not open for dinner. Rainier Provisions is open six days a week (closed Sundays) at 11:30 a.m. but closes at 7 p.m. each day. 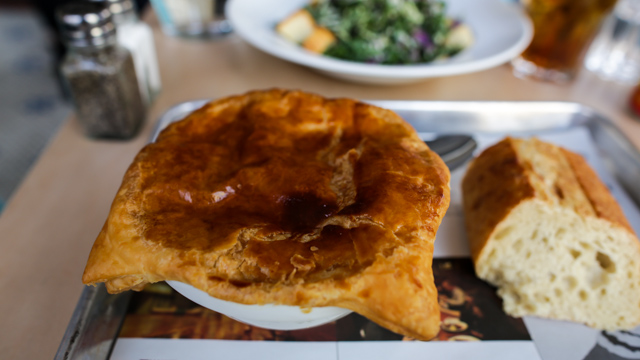 The fish pie is made daily with local cod and vegetables in a fish veloute under a puff pastry crust.  I saw the pies just flying out of the kitchen and they quickly sold out of those as well a few minutes after I ordered mine. 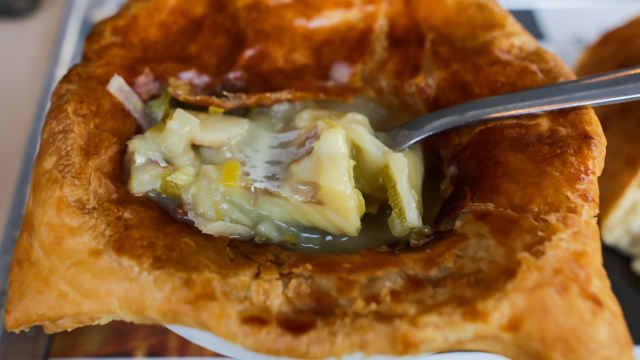 Breaking through that crispy puff pastry crust reveals big chunks of cod and vegetables in a thick sauce, perfect for soaking up with the hunk of crusty baguette included with the pie.  I could’ve used a touch more seasoning but it’s a hearty meal, probably even better on cold winter days instead of the amazingly warm spring long weekend we just had in Vancouver. 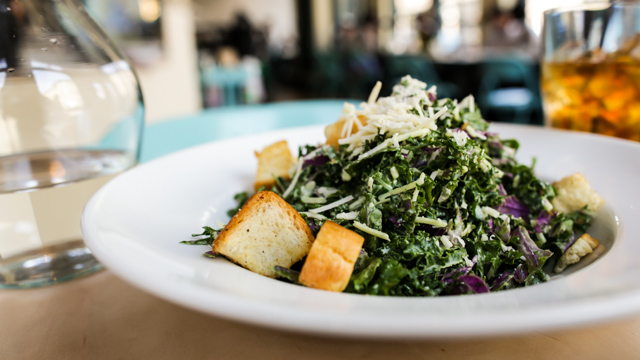 When my server asked if I wanted the salad as a side, I assumed it would be a small portion but instead, I got this mountain of kale, shredded asiago and parmesan cheese, and anchovy-less Caesar dressing.  This is an enormous salad for four bucks!   The salad is lightly dressed but includes a generous helping of cheese, adding a nice salty, nutty kick to the mildly bitter kale.  That part is fantastic, although the kale was shredded fine enough that a spoon made more sense than a fork.  The large croutons, however, were quite stale tasting which is unfortunate because that little extra crunch and texture probably would’ve taken this salad from very good to excellent. 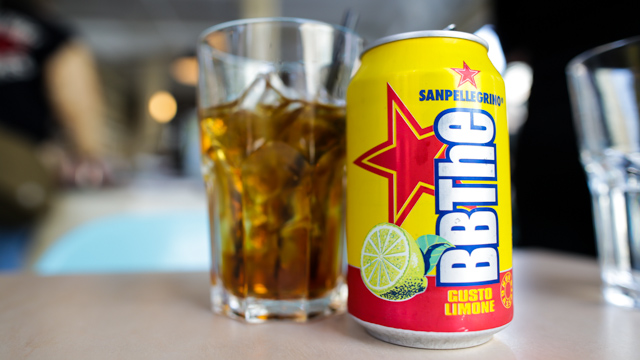 Rainier Provisions is licensed and serves a small list of beers and wines as well as Stumptown Coffee.  I opted for a San Pellegrino, seeing as how I had never encountered this particular can before and couldn’t figure out what “BBThe” is.  It’s lemon iced tea and tastes pretty much like any other lemon iced tea.  Go for the new awesome blood orange soda instead. 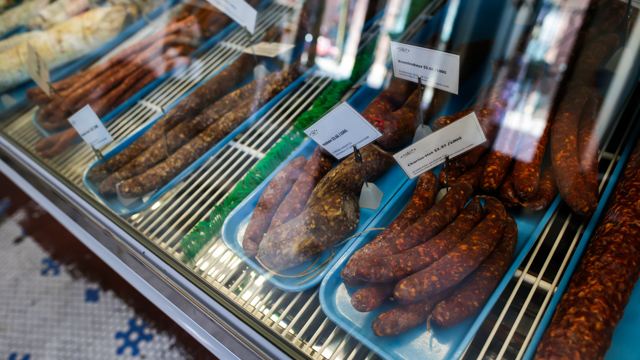 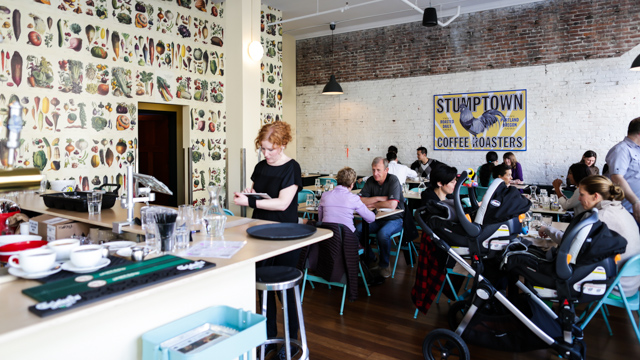 A meal at Rainier Provisions is a surprisingly good value.  Entrees are all around the $10 range with the daily roasts coming in at $12 a plate.  Many of the specials at the deli counter even come with a bowl of soup or a salad!  Restaurants opening in Vancouver’s Downtown Eastside have gotten a bit of bad press lately in regard to the gentrification debate.  I’m just a food guy so I won’t jump into that debate but I will say that Rainier Provisions is quite affordable and I know the Heather Group does a lot of great work in support of the Downtown Eastside.

You can always tell when the owners are passionate about their restaurant.  All you have to do is contrast a place like this with one of the hundreds of generic sushi restaurants in town that are open just because someone wanted to cash in on the California roll craze in the ’90s.  This is a great new restaurant.  The space is interesting and has character.  Prices are reasonable and there’s free Wi-Fi if you want to get some work done over a cup of local coffee (or just pretend when you’re actually watching cat videos).  The food is delicious and made with care.  It shows that the people running the place care about giving their customers a good meal and a pleasant experience.  I’ll definitely be making a return visit, especially if they’ll save me some suckling pig next time.