“Yes, we have tables in the restaurant.” Usually this call is to see if a restaurant has tables available but in the case of Nosh, a new rotisserie restaurant in Kitsilano, it’s to check if there are tables there at all since their menus have the word “take-out” plastered all over them. Take-out isn’t a problem but I live in Richmond, which means getting take-out from Kits results in either my food getting cold or me reinforcing several driver stereotypes so I had to check before I gathered some friends to head to Nosh. 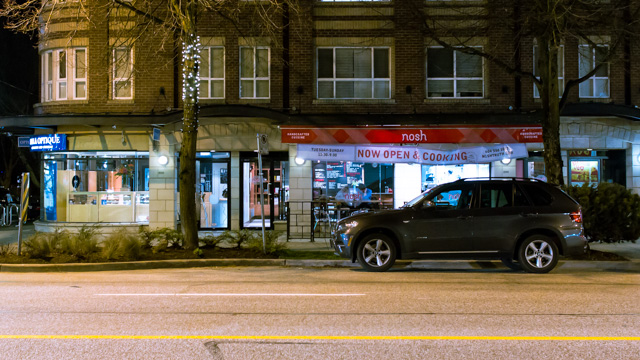 Opened by a mother-son team, Sandra and Tony Scott, with executive chef John Ly in January, Nosh occupies the spot that was previously Mistral French Bistro. 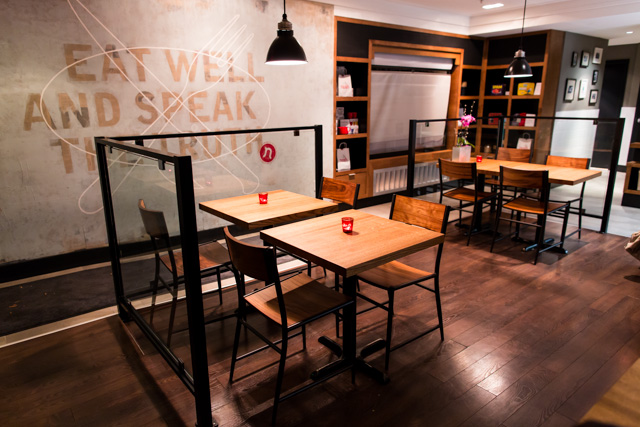 I observed a few elements of the old restaurant around but otherwise, it’s been completely redesigned into something of a vodka bar combined with a log cabin. 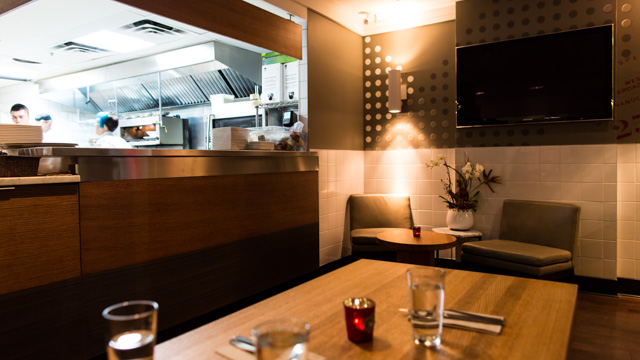 Hard edges and polished metals are balanced with natural woods and warm lighting. There’s about 25 seats in the restaurant, which were mostly full when my friends and I visited. The open kitchen is a nice touch, giving the space a little extra ambiance and character while allowing the aroma of slow roasted meat to assault you as soon as you step in the door. 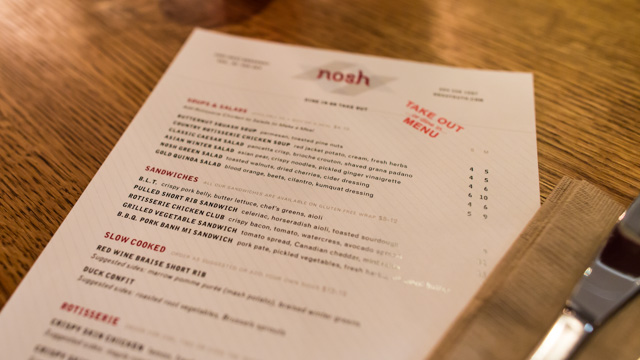 The menu is concise and organized. There are six starters, five sandwiches, four entrees, six sides and six desserts (which we were way too stuffed for at the end) available. You order at the front counter but a server brings you your food if you’re eating in. 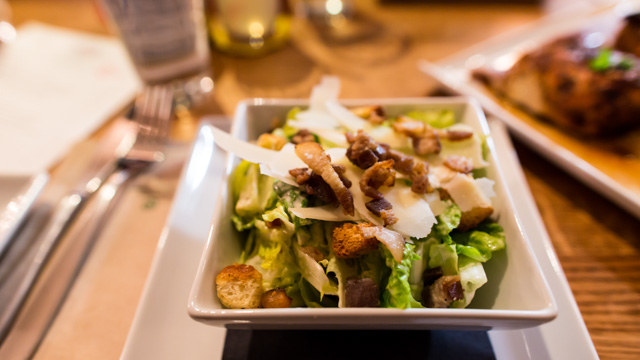 I started with a classic Caesar salad ($5), a bowl of fresh romaine lettuce tossed with crisp pancetta, grana padano cheese and brioche croutons. Unlike most places that think Caesar salad means you have to drown everything in dressing, Nosh keeps the dressing light, letting the smokey bacon and sharp, nutty cheese flavor the salad. 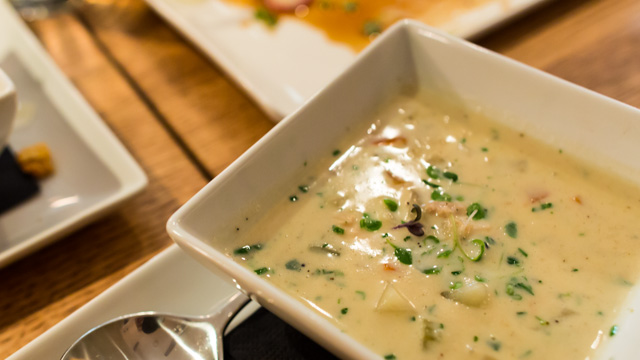 You can also order meal-sized portions of the salads or soups, like this country rotisserie chicken soup ($4 small, $6 medium).

The headliners at Nosh are the two rotisserie meats, a chicken and a pork shoulder, which you can order as a single portion or, if you want to share, a whole roast. Between the seven of us non-vegetarians, we figured we could split a whole chicken, a whole pork shoulder and order a few other menu items as well. 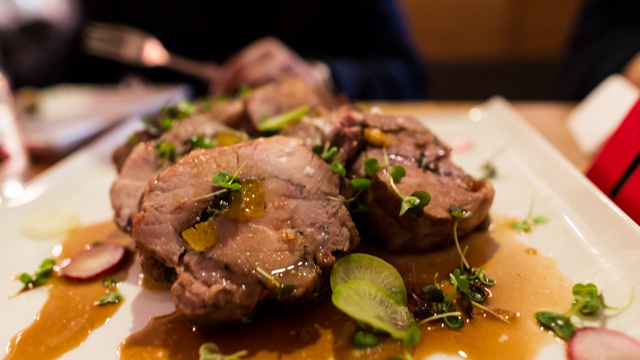 A whole pork shoulder ($22) is eight thick slices of pork stuffed with sage, pine nuts and apricots. The pork is moist and juicy throughout, cooked perfectly with a hint of pink in the centre. The earthy sage and sweet apricots add some great flavor to the tender shoulder.

If you order the pork shoulder individually (top image, $14), it’ll come with a side of roasted root vegetables and Brussels sprouts. I thought the sprouts were a bit undercooked but the bowl of root vegetables was fantastic. There’s bits of bacon mixed in to the bits of soft yam and potato for a interesting combination of textures and flavors. 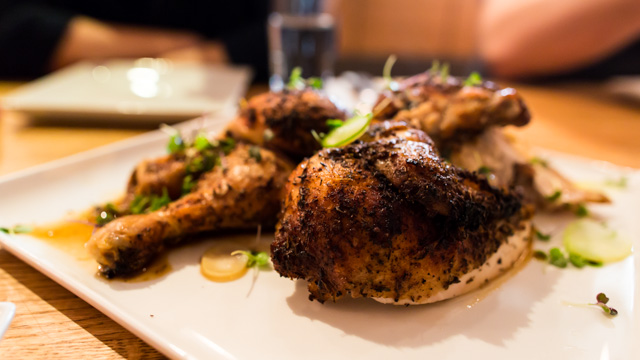 The crispy skin chicken ($16 whole) actually isn’t all that crispy but it’s still delicious. Again, don’t expect skin like fried chicken but the bird was absolutely perfectly cooked with the white meat tender and juicy while the dark meat was even better. The crust of fresh herbs gives it such a great combination of savoury tastes, balanced by a tangy hint of lemon and the sharp green peppercorn jus. 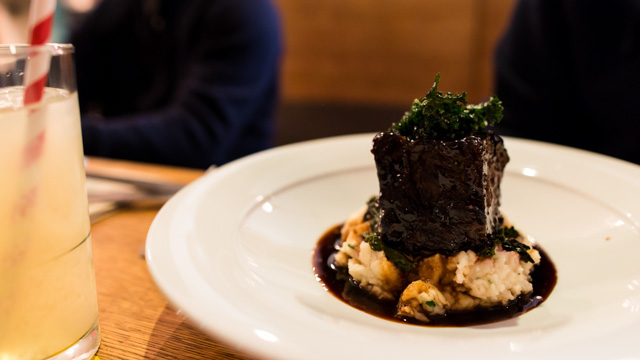 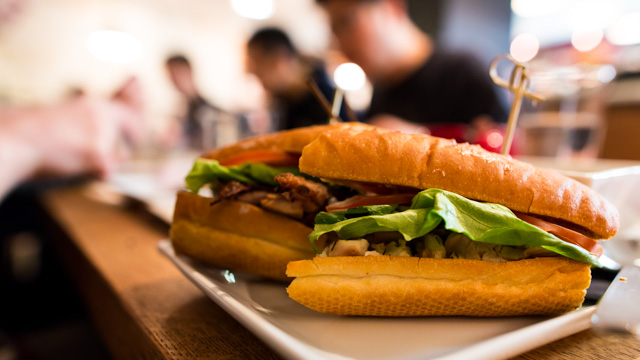 If you were looking for a bit of a lighter meal (just slightly), each one of the meats also comes in a unique sandwich. This is the rotisserie chicken club, which has big chunks of that same great rotisserie chicken with strips of crispy bacon, tomato, watercress and avocado. 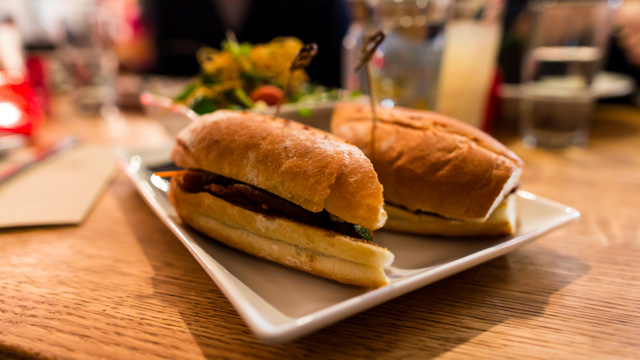 The BBQ pork banh mi sandwich is a tad more expensive than the ones you’ll find at pho joints around Vancouver but it’s also prepared with a bit more care.  The pork is tender and succulent, backed by what my friends described as a rich, flavorful pork pate and tangy pickled vegetables. 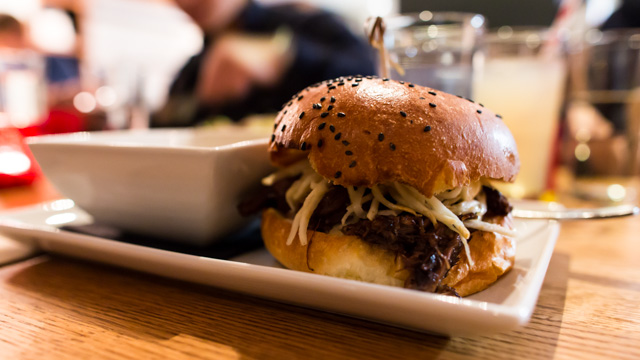 The braised short rib can be found in sandwich form as well ($9), served with celeriac and horseradish aioli on a toasted sourdough bun.

For a take-out place, Nosh takes surprising care and attention to detail when it comes to eating in. Dishes are attractively plated and garnished on top of being well prepared. Staff are friendly and cheerful, keeping waters topped and checking in without being intrusive. There are nice small touches as well, like these snazzy paper straws. 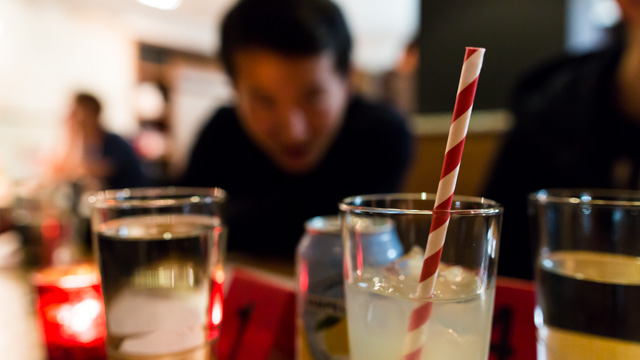 Nosh serves up some great food and is a rather good value as well. However, while everything was cooked nicely and well seasoned, Nosh lacks that killer dish, that thing that you just have to try like, for example, Phnom Penh’s chicken wings. The rotisserie chicken is a standout on the menu but there isn’t a dish with that x-factor that would convince the masses to line-up out the door. Nosh is a step above your usual take-out, with a kitchen that’s obviously skilled enough to produce results. This is a great start for Nosh and I’m excited to see if they develop more on the menu after they’ve had some time to settle in.