Before we get to Longtail, I’d like to mention this River Market out at Westminster Quay. If I’m honest, I haven’t been to New Westminster very many times for someone that’s lived in the Lower Mainland for the better part of three decades. It’s partly because the streets are infuriating, sometimes ending abruptly for no reason and often just before getting me where I want to go. Otherwise, it’s because I haven’t had many memorable dining experiences in that part of Vancouver. I might just be picking all the wrong places but I can’t think of one off the top of my head that I liked enough to go back. The few places I do remember have closed in favor of yet more wedding dress stores and since I’m not in the market for one of those (regardless of how good I look in white), I just haven’t been to New West all that often. 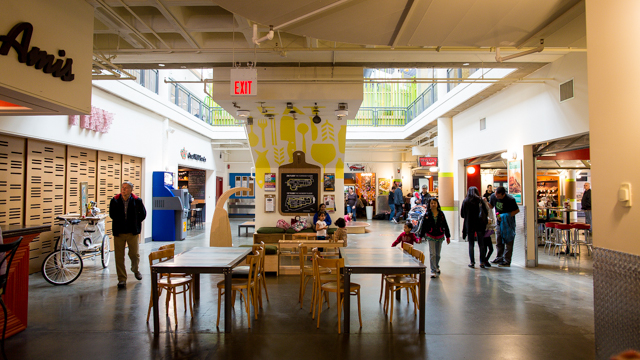 You can imagine how surprised I was to find River Market at Westminster Quay, a newly renovated waterfront space with various shops, an independent grocery store, an arts market and a few spin-offs to recognizably popular Vancouver restaurants such as Re-Up BBQ and Wally’s Burgers. The story of Westminster Quay sounds a lot like the one about the old Bridgepoint Market in Richmond: a declining public market project from the Expo-era closed and reborn. While Bridgepoint eventually became the site where you can find the River Rock Casino today, Westminster Quay Public Market became…another public market. Yes, I’ve now read that it’s been around for a few years now but in my defense, it re-opened in 2010 and quite a few things happened that year.

It lacks a unique character like Granville Island and Lonsdale Quay but that’s something that comes with age.  River Market is a pleasant place to be.  There’s a sense of cohesiveness with the stores, like they all follow some sort of central theme. One of the reasons I think Bridgepoint Market failed was because it only had stores in it that no one ever shopped at. I only ever remember my dad buying me packs of these awesome Nintendo game cards at that place and it quickly went under after a failed bid to open a Chinese restaurant on site.  River Market, on the other hand, feels like a curated list. No big fast food chains or department stores here. The word “artisanal” comes to mind and oh my goodness, that bakery smells amazing. 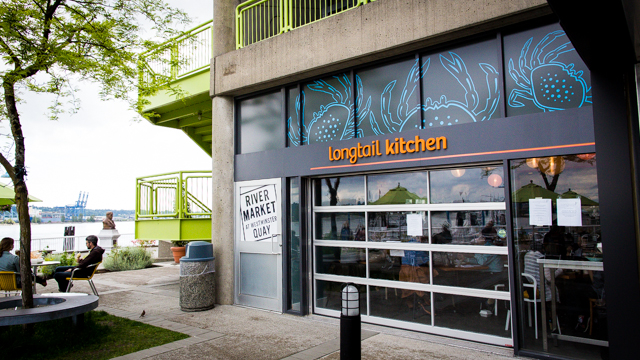 I was sufficiently charmed by River Market so I didn’t really mind the wait to get a table at Longtail, which was understandable for a buzz-filled opening week. 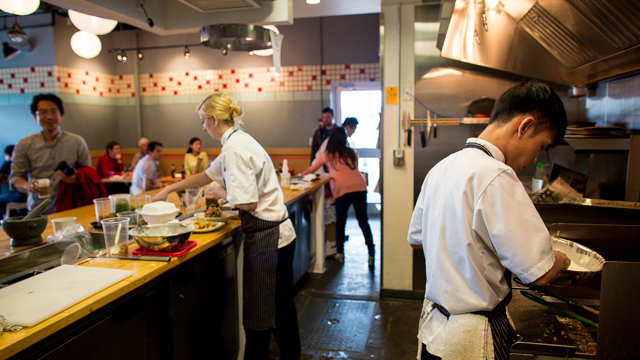 I’m told that the menu’s inspiration is Thai street market food. Food in Asia is like a Step Up movie: &^%# gets real when you take it to the streets. That’s where you can find all sorts of delicious morsels big on flavor and small on pretense. Honest, inexpensive and, more often than not, prepared by someone that really knows their craft.  In Vancouver, there’s few that know the craft of Thai cuisine like chef Angus An of Maenam but while Maenam is a more refined, fine dining experience, Longtail isn’t shy about serving good food in paper cups.

While An is occupied at Maenam, chef Justin Cheung  is usually running the show.  Cheung previously worked at Tapenade Bistro in Richmond as well as for An at Maenam. 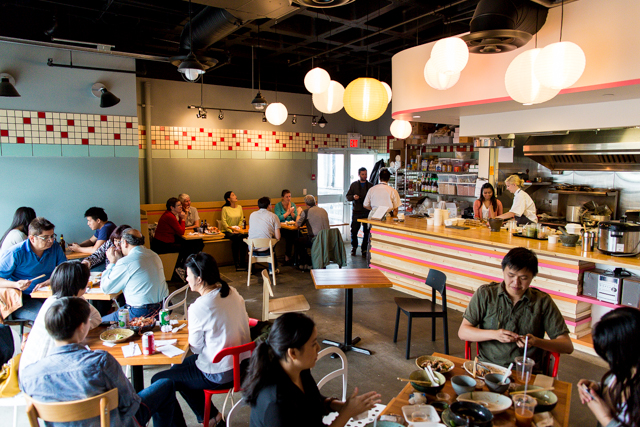 The space is bright and cheerful with warm woods and muted pastels making up most of the decor.  The counter looks like it’s made of Neapolitan ice cream and although my chair felt more like lawn furniture, it was still comfortable.  There’s seating for maybe 25-30 people inside and I think they’re opening up the patio soon if they haven’t already since Vancouver is warming up. 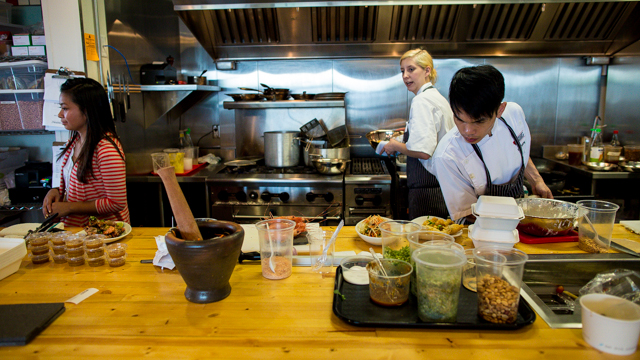 The kitchen is open, which is probably about as close as we’re going to get to a bustling market in Thailand this side of New Westminster.  There weren’t any servers so you’re ordering at the counter, picking up and then tossing your dishes in a tray nearby.

While you can find everything this side of deep fried scorpion at a typical open air market in Thailand, the offerings at Longtail aren’t quite as numerous. While the menu is short, it’s rapidly expanding and I’m told some dishes will appear when their ingredients are in season. The soft opening for Longtail happened to coincide with spot prawn season in Vancouver so you can guess what made it on the menu. 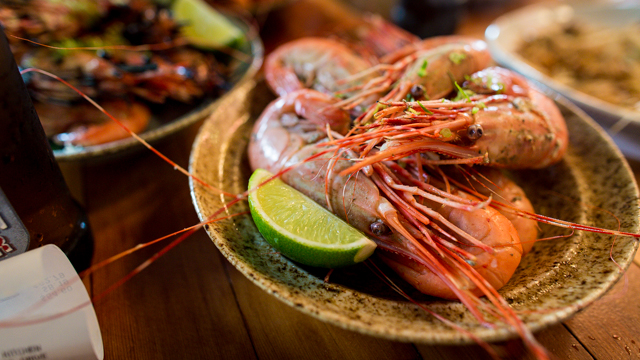 The spot prawn special ($20 for a pound, includes a beer or Thai iced tea) was available grilled or steamed. The steamed ones are lightly tossed with some crushed spices and a few squirts of lime. The natural sweetness of the spot prawns really shines here and you get all that rich, brainy goodness when you suck the liquids out of the head. You’re doing it wrong if you toss the heads without draining them, by the way. It’s such a cliche to claim they taste like the ocean but seriously, that briney essence is so intense that you almost expect a wave to smash you in the face. 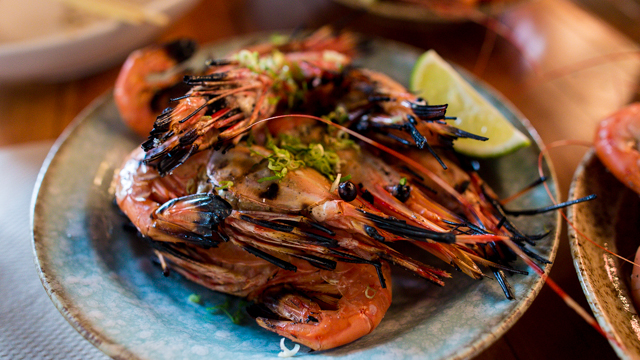 I was less of a fan of the grilled ones. While the bodies had great flavor with the added smokiness after peeling the shell, the smoke flavor is far too much when it comes to the heads. The smoky flavor just overwhelms everything else. Not bad but not as good as the simple steamed ones. They needed a lighter touch.

Since there were five of us and we’re all adventurous diners, my companions and I decided to get one of everything on the menu to sample. 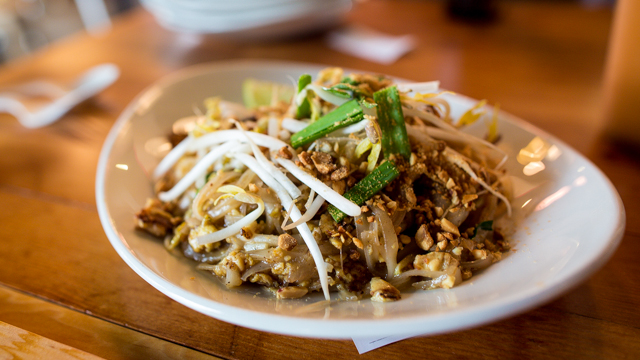 This Pad Thai ($10) was fantastic…a stunningly good example of Pad Thai.  The rice noodles were bouncy and perfectly cooked, tossed with the right balance of crisp bean sprouts, tofu, toasted peanuts and some large, tender prawns.  The seasoning is great too with a little kick.  Squirt a wedge of lime and you have a harmony of sweet, salty, spicy and sour.  Hands down one of my favorite Pad Thai’s in the city. 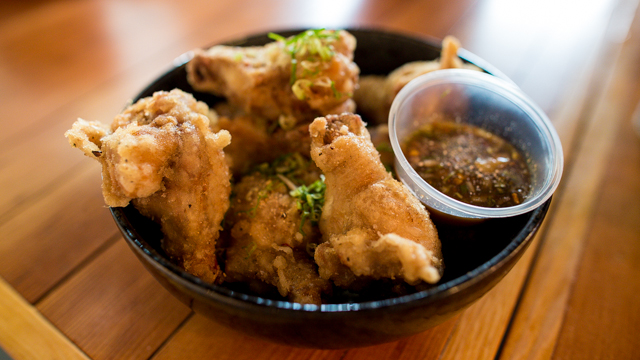 The obvious comparison, even from an appearance standpoint, is with the deep fried chicken wings at Phnom Penh, which is the undisputed champion of chicken wings in Vancouver.   Let me be clear, the deep fried chicken wings ($6) at Longtail are phenomenal.  As someone that doesn’t like super sauced out buffalo wings (I hate that buffalo sauce, actually) and usually orders salt and pepper instead, these blow the doors off pretty much every establishment in Vancouver apart from from Phnom Penh.  Again, that isn’t to say that these wings aren’t off the charts but the wings at Phnom Penh are so good, I swear they have actual drugs in them.

The cook is spot on.  Each wing is tender and juicy under that crispy crust.  The fragrant dipping sauce adds a nice tangy flavor but personally, they’re still Joe Frazier to Muhammed Ali.  However, I’d still recommend you order these and put them directly into your face.  You’ll thank me later. 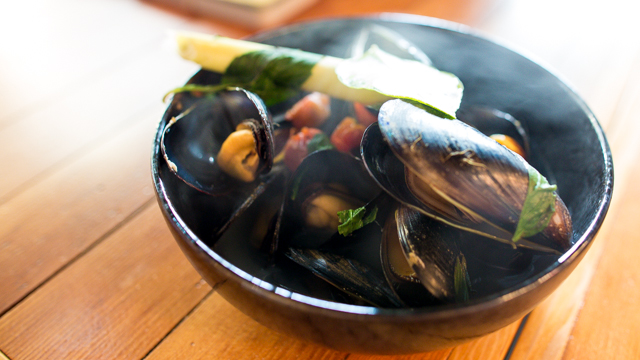 The mussels ($8) are steamed with, among other things I’m sure, lemongrass and tomatoes.  I could’ve really used some sort of bread or something to soak up all that broth at the bottom.  It’s just packed with flavor.  The mussels are big and juicy and while I wanted more of them, I couldn’t complain for a very reasonable $8. 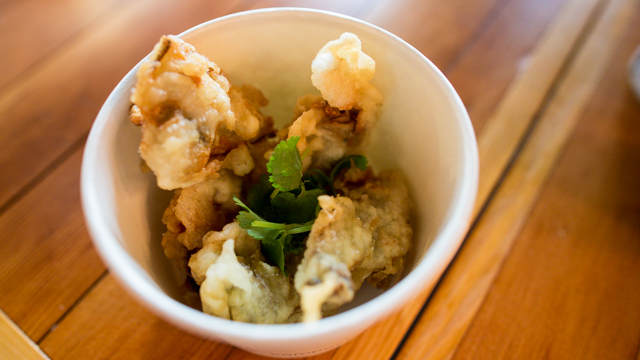 I didn’t expect to be impressed by this little disposable cup of deep fried oysters ($6) but I was.  The batter is crispy and light like top notch tempura, keeping all that delicious, gooey oyster goodness intact before it fireworks in your mouth. 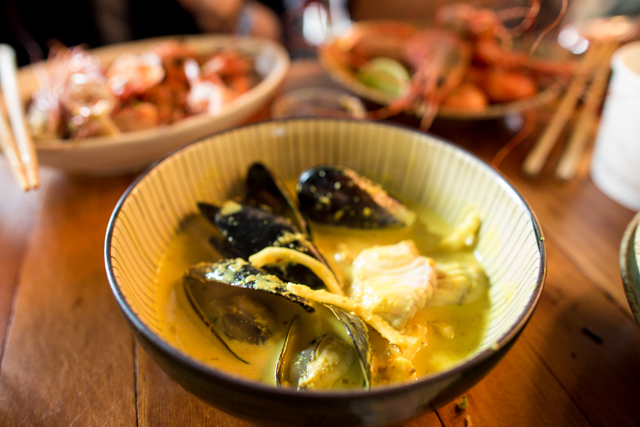 The curry ($10) is actually lighter than it looks.  The coconut cream and turmeric make for a rich, aromatic sauce to go with the fresh mussels and delicate chunks of ling cod.  This and a bowl of rice (it comes with rice) and I’d be very happy on a cold, rainy Vancouver day.  I don’t know if it’s traditional or not but some potatoes (lightly deep fried beforehand) would make this dish even better. 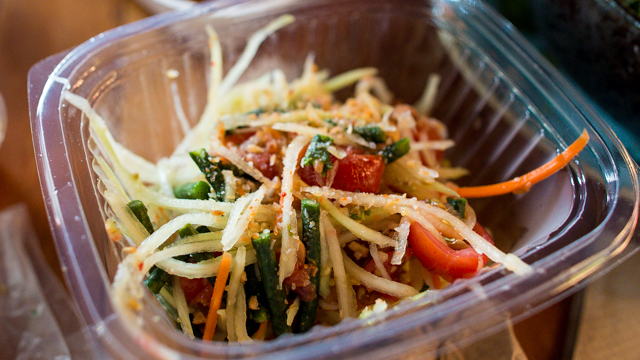 The papaya salad ($6) was a bit of a miss for me and not just because you don’t make friends with salad.  The fruits and veggies were fresh and crisp but lacked the punch of flavor I got from all the other dishes served at Longtail.  It was, for lack of a better word, just a little bit plain. 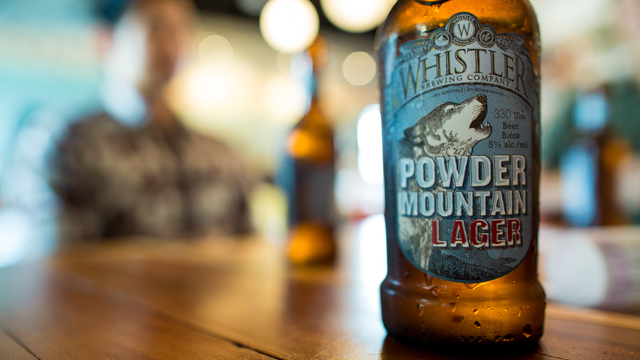 Oh, those drinks that came with the spot prawns?  One is this Whistler Brewing Company “Powder Mountain Lager”.  I didn’t see any others in store (maybe because it was just soft opening week) but I’d imagine the best match for Thai street food is cheap Asian beer. 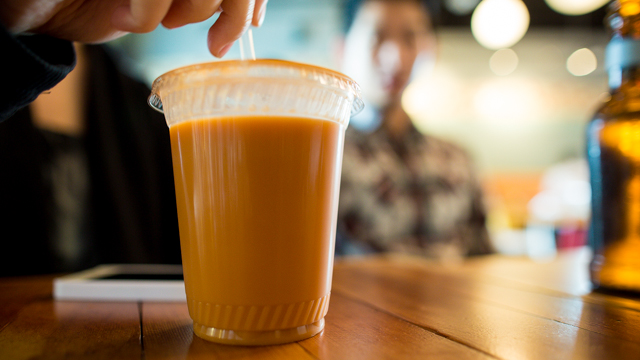 One of my friends proclaimed that this Thai iced tea ($3) is “life changing” and I’m rather sure she had three.  I would’ve gotten one if I wasn’t so full but I guess that will have to wait for another day.  Two other people at the table got a second round to go. 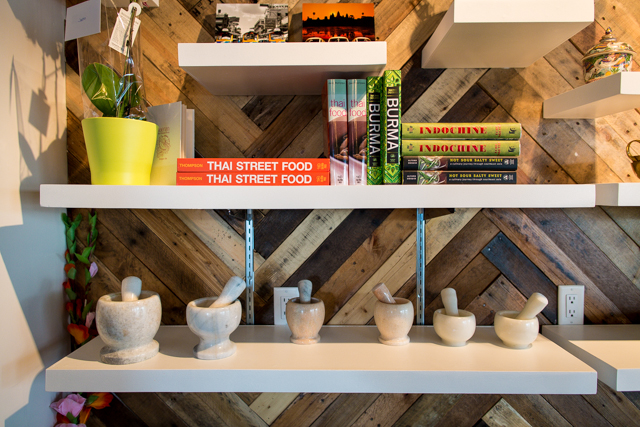 Apparently Longtail Kitchen will also sell cookbooks and kitchen gear.  It makes for a rather striking wall fixture too. 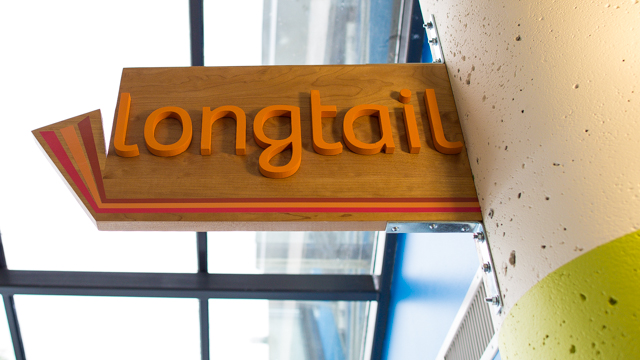 In case you haven’t figured it out, Longtail is a gem.  Everything on the menu is an affordable $10 or less, the space is fun and inviting and the food, apart from a hiccup here or there that could use a little attention, is all sorts of delicious.  Despite being inspired by Thai street food, chefs Angus An and Justin Cheung have brought a sense of fine dining precision and attention to detail.  The flavors are well thought out and balanced, executed well by a well-oiled machine kitchen brigade.  Longtail has all the makings of a great “foodie” destination.  Fast food-like affordability but made by people with both culinary skill and love for food.