Hockey Canada unveiled a new look for our national hockey teams on Tuesday, showing off new jerseys at a media event in Toronto.

As former national team member and current TSN broadcaster Tessa Bonhomme said, it’s a subtle change. Hockey Canada changes up their look quite often, likely because it’s good for business. Whatever the motivation, it’s always interesting to see what look they’ll come up with next.

Hockey Canada is going away from a more traditional look this time, as opposed the previous incarnation (see below).

#WorldJuniors is coming to Montreal and Toronto next year. Lock in your seats! https://t.co/1TfAIGZ4O1 pic.twitter.com/uho9C2tfIP

The colour black is featured much more prominently on the new jerseys, with subtle rows of maple leaves mixed in. There’s also a Canada 150 patch on the sleeves, to commemorate the 150th anniversary of Confederation. 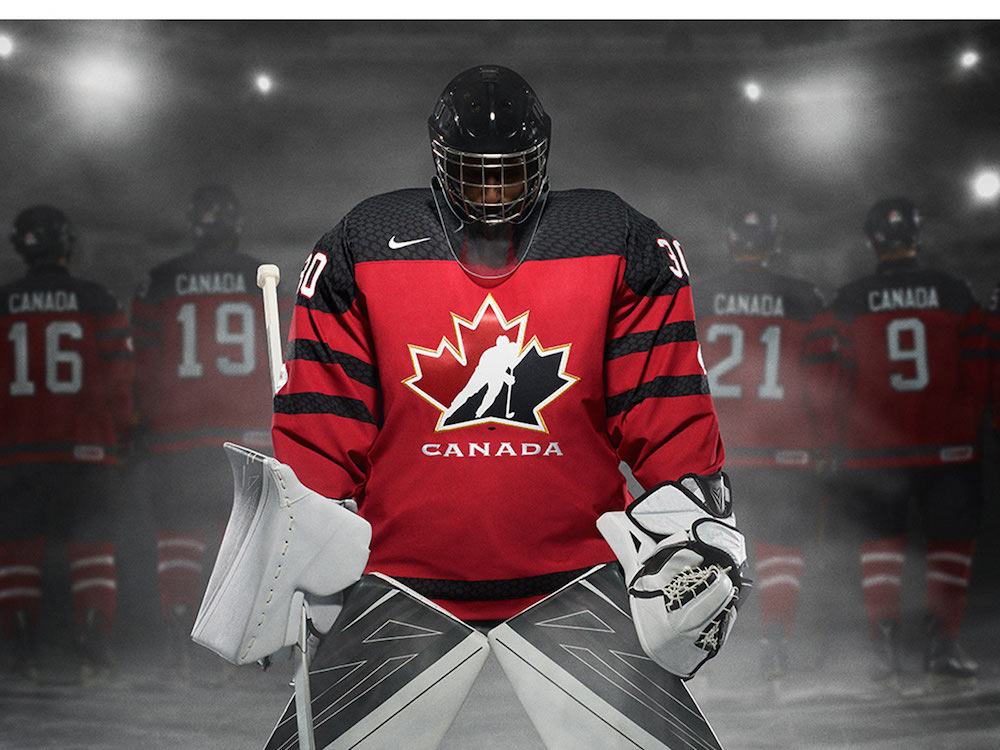 As with most jersey launches, there needs to be some sort of meaningful backstory to it. I get why they do it, but just once I’d just like to hear an organization say “here’s our new look, we just think it looks cool.”

Anyways, get ready for the big explanation…

“This jersey is designed to match performance with patriotism,” said Tom Renney, president and chief executive officer, Hockey Canada. “I have been lucky to be able to turn my passion for the game into a career; and what I realized very early on is that hockey goes well beyond what’s learned on the ice. Hockey is part of the fabric of our nation, and teaches all of the life lessons that build great citizens. We wanted to ensure that every aspect of this jersey had a deep meaning to Canadians, while still pushing the envelope with innovation. From the bottom white stripe to the embedded maple leaves, the jersey is emblematic of that intrinsic link between the game and the 35 million Canadians who carry the Maple Leaf in their hearts.”

“In 2017, as we celebrate the milestone 150th anniversary of Confederation, we naturally reflect on the integral role that hockey plays in uniting Canadians,” said Raj Grewal, MP for Brampton East. “This year’s jersey reflects the pride this great game brings to our country and its importance in our culture.”

Here’s some more information from the media release:

Engineered using Nike AeroSwift Technology and woven with Ripstop Fabric, the jersey is made to endure the athletes’ fast and physical performance on the ice. Meshed zones under both arms support thermoregulation through optimal ventilation allowing players to stay cool during the game.

The jersey prominently features the Canada 150 logo on both sleeves, composed of a series of diamonds that represent the four original Confederation provinces, forming the shape of the iconic Maple Leaf. On the upper section of the jersey, rows of maple leaves fill the jersey’s shoulder caps, forming one of the most patriotic features ever seen on a national jersey. The icon of the Maple Leaf represents one voice and the repeat of the icon represents the nation rallying around hockey. The unique and classic double-stripe on the jersey’s sleeves returns, but has been accentuated with a black and red accent making the exclusive design pop like never before.

The next big international tournament on the hockey calendar is the World Cup of Hockey in September, but you won’t see these jerseys there.

The next big tournament that you’ll see Hockey Canada’s jerseys at will be at the World Juniors in December.