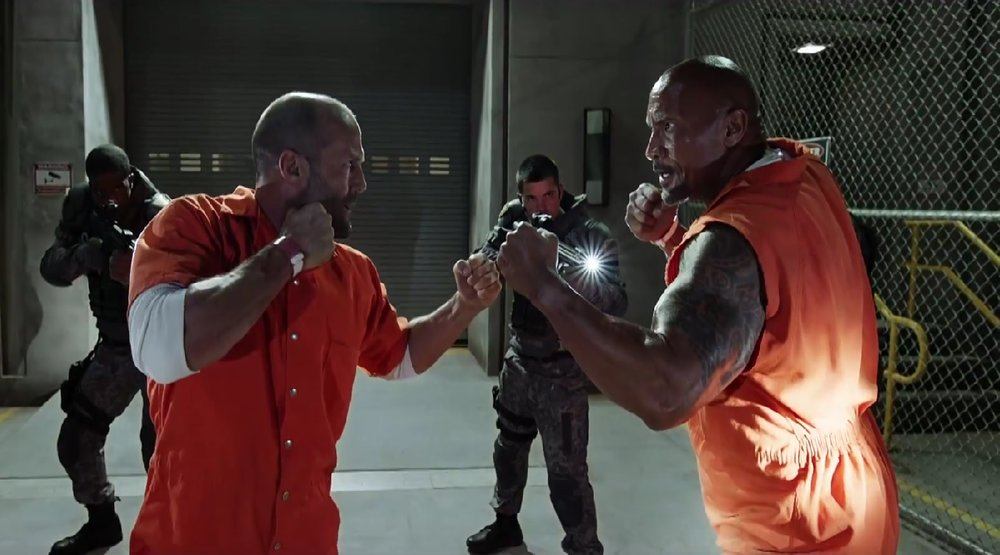 April showers means more time at the movies! There’s something for everyone as we’ve got you covered when it comes to the newest flicks hitting theatres in the upcoming weeks.

This month’s highlights include: an animated reboot that might leave you blue in the face, a geriatric heist comedy, another Fast & Furious installment, a giant monster movie starring Anne Hathaway, and an ultra-violent 70s shoot-’em-up.

To help you separate the must-sees from the wait-for-DVDs, here’s our handy list of 10 titles to watch for in theatres this April.

Yep, they made another one but don’t expect Neil Patrick Harris this time around. In fact, this fully animated version is actually a reboot intended to make us forget 2011’s horrible live action/cartoon hybrid. In the new adventure, a mysterious map leads Smurfette (Demi Lovato), Brainy (Danny Pudi), Clumsy (Jack McBrayer), and Hefty (Joe Manganiello) through the Forbidden Forest as they make a startling discovery about their origins. The kids should love it; the rest of you, Godspeed.

Hollywood’s favourite old dudes team up with Scrubs star Zach Braff as he directs this remake of a 1979 comedy about three bankrupt friends (Morgan Freeman, Michael Caine, Alan Arkin) who decide to rob the very bank that stole their riches. The movie may contain some surprises but if the trailer is any indication it’s going to be another forgettable and potentially embarrassing outing.

The Fate of the Furious

What began as a cool car movie in 2001 has exploded into Universal’s biggest film franchise of all time. In the eighth instalment of the wildly popular series, (directed by Straight Outta Compton’s F. Gary Gray) the gang is back, but there’s a twist – Vin Diesel’s Dom has gone rogue and is in cahoots with a villainous, dread-locked Charlize Theron. Watch for new cast additions Kurt Russell, Scott Eastwood and Helen Mirren. The action set pieces are veering into utterly ridiculous, sometimes resembling a James Bond flick, but this is sure to be box office boffo.

Chris Evans takes a break from Captain America duties to play a single man raising his prodigy niece (Mckenna Grace) who becomes embroiled in a custody battle with his own mother (Lindsay Duncan). The family drama also stars Octavia Spencer, Jenny Slate, and is directed by 500 Days of Summer helmer Marc Webb.

The Lost City of Z

Director James Gray’s (The Immigrant) historical adventure finally hits the big screen this month. Based on the 2009 novel, the film features Charlie Hunnam and Robert Pattinson as explorers in the 1920s who attempt to find an ancient lost city in the Amazon. The movie went through numerous production delays and casting changes – Brad Pitt was attached to star at one point – but the finished product is attracting a lot of buzz and looks like a promising and not to mention, thrilling period piece.

Who doesn’t enjoy a romantic comedy set during World War II? Gemma Arterton, Sam Claflin, and the always-delightful Bill Nighy star in a compelling story about a film crew who try to boost morale by making a propaganda film after the Blitzkrieg. A dose of Wag the Dog with a dash of dry British wit could be a recipe for success.

The best genre mashup of the season will likely be this science fiction comedy-drama that was partly shot in BC. After losing her job and boyfriend, Gloria (Anne Hathaway) discovers her mental breakdown is inexplicably connected to a massive monster wreaking havoc in South Korea. The premise alone sounds rather promising. The flick also stars Jason Sudeikis plus Legion and Beauty and the Beast star Dan Stevens.

Get ready for a 70s-fuelled punch to the face with this no–holds–barred throwback! Set in Boston in 1978 this gritty TIFF darling, from director Ben Wheatley (High-Rise), stars Brie Larson, Armie Hammer, Cillian Murphy, and Sharlto Copley. The plot centres on a meeting between two rival gangs in a deserted warehouse that leads to a deadly shootout. Expect genre thrills and pulpy spills.

This historical drama with Oscar Isaac, French-Canadian Charlotte Le Bon, and Christian Bale takes place in the final days of the Ottoman Empire. The plot involves a love triangle between a brilliant medical student, a sophisticated young woman, and a renowned American journalist living in Paris. The film looks like a handsome production with plenty of acting clout but some early reviews suggest this may be a sappy, sentimental bore.

Emma Watson continues her hot streak, alongside Oscar-winner Tom Hanks, in this sci-fi thriller based on the 2013 Dave Eggers novel. A woman (Watson) lands her dream job at a high-tech firm (run by Hanks) but soon discovers the company has a sinister agenda that will affect all of humanity. The movie also features John Boyega, Karen Gillan, Patton Oswalt, and the late, great Bill Paxton.