It is Friday, and you know what that means… NEW MOVIES! This weeks new movie reviews include: The Hobbit, Hyde Park on the Hudson, The Guilt Trip. 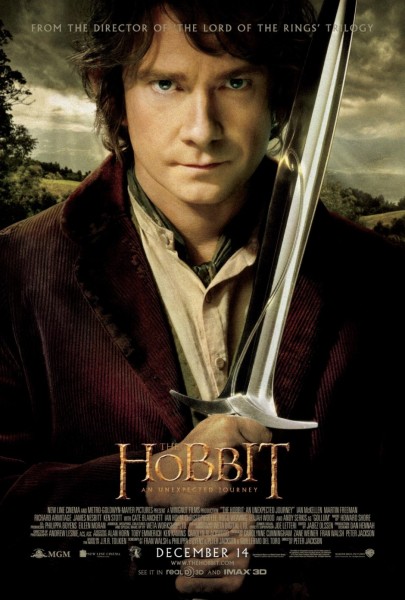 The Hobbit
The Hobbit: An Unexpected Journey is an interesting film. It’s directed by Peter Jackson and starts the first of a three-part film adaptation of the 1937 novel The Hobbit by J. R. R. Tolkien, to be followed by The Desolation of Smaug and There and Back Again (due for theatrical release in 2013 and 2014.)

Set sixty years before The Lord of the Rings, the story is about the hobbit Bilbo Baggins (Martin Freeman), who is hired by the wizard Gandalf (Ian McKellen) to accompany thirteen dwarves led by Thorin Oakenshield (Richard Armitage) on a quest across Middle-earth to reclaim the Lonely Mountain from Smaug the dragon. Their journey will take them into the Wild; through treacherous lands swarming with Goblins and Orcs, deadly Wargs and Giant Spiders, Shapeshifters and Sorcerers.

Although their goal lies to the East and the wastelands of the Lonely Mountain, first they must escape the goblin tunnels, where Bilbo meets the creature that will change his life forever … Gollum. Here, alone with Gollum, on the shores of an underground lake, the unassuming Bilbo Baggins not only discovers depths of guile and courage that surprise even him, he also gains possession of Gollum’s “precious” ring that holds unexpected and useful qualities … A simple, gold ring that is tied to the fate of all Middle-earth in ways Bilbo cannot begin to know.

When it comes to the acting the entire cast has no issue delivering lines and drawing us in. Why would there be an issue? The film is extremely long (169min). If they can’t build character depth during that time frame, I would have sued the theatre for taking three precious hours of my life away. Though the film is long, i t’s not giving anything away to say that the dwarves don’t even make it inside their former kingdom by the end of the film — except to reinforce how little happens in this picture of any consequence. When it comes to  The Hobbit, this biggest disappointment is how boring the film is. Its slow paced and nothing like its sister franchise. I got a lot of rest prior to viewing the film and I still nearly fell asleep on two occasions. One reason was likely due to the repetitive background. It was like I was watching one of those old Scooby-do cartoons when they keep running and running and the background is the same.

Aside from its length, The Hobbit attempted to do one thing that no other film has yet to do. Not only was the film in 3-D, but it also shot the entire thing in an abnormal frame speed of 48 frames per second instead of the standard 24, which not only makes it distracting at times, but it also ruins the whole “movie experience”. Let me explain — the faster frame rate means the images are so sharp that you feel as if you’re standing on the set, taking you out of the experience entirely. In addition, some of the characters’ movements appear weird, as if they were moving at the wrong speed. On top of that, if you have a weak stomach, you better bring a barf bag. Some viewers reportedly have felt nauseated due to the high 48 FPS.

It does have some absolutely gorgeous sequences — especially the elaborate chase scene near the end. But as a Tolkien fan (having read The Silmarillion — which precedes even The Hobbit — and all The Lord of The Rings novels when I was twelve), overall I was a little disappointed in how the film plays out.  In the end there is no denying the homey charm at work in Tolkien’s good-versus-evil tale and this alone may be enough for die-hard fans to sit through The Hobbit even if it means puking or falling asleep from time to time. I give The Hobbit a generous 6/10. 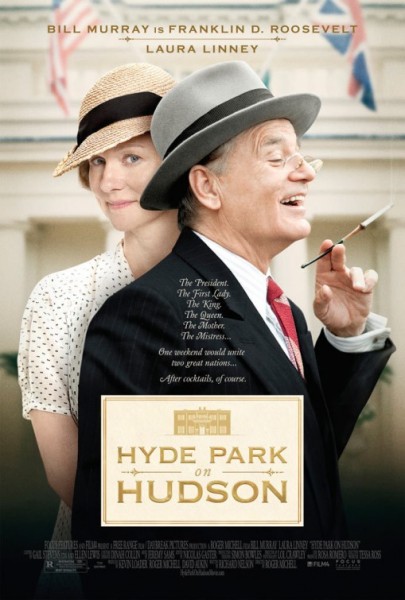 Hyde Park on the Hudson
Hyde Park on Hudson is a British biographical comedy-drama film directed by Roger Michell. The film stars Bill Murray and Laura Linney as Franklin D. Roosevelt and Margaret Suckley. It was based on Margaret Suckley’s private journals and diaries discovered after Suckley’s death, about her love affair with and intimate details about President Franklin D. Roosevelt.

It all started in June 1939, King George VI and his wife, the Queen Consort Elizabeth (parents of the current Queen Elizabeth II) made a visit to President Franklin D. Roosevelt’s country estate in Hyde Park, New York. At the same time, the President was growing closer to his sixth cousin and eventual mistress, Margaret Suckley. No British monarch had ever visited the U.S. before, and Roosevelt hoped to bolster American support for the United Kingdom on the eve of World War II, which broke out less than three months later.

Going into the film I had high expectations. Two words and two words only came to mind – BILL MURRAY. Being a long-time fan of his (especially in Wes Anderson films) I believed despite what the story would be, Bills acting could keep the film together enough that I wouldn’t be tempted to give it a bad review. Unfortunately this was not the case.

I don’t know if I’ve ever seen a movie as spectacularly one sided as Hyde Park on Hudson. Once again Hollywood has taken something and decided to pimp-it-out as a totally different product — A work of historical debauchery about Franklin Delano Roosevelt. The news that FDR probably had affairs with a number of women, including a possible longstanding romance with his sixth cousin is dispiriting but not surprising. The only thing I would ask from director Roger Michell is for a more developed well rounded portrait of FDR balancing his strengths and weaknesses with a clear eye to both national and personal responsibilities, but instead Michell gives us a creepy sexual predator.

Although it was great to watch Bill Murray romping along as FDR, not even his acting could save this film. If you take FDR out of the picture and pretend you are watching a movie about a perverted old man romping around the state of New York, it has its moments. I give Hyde Park on the Hudson 2/10 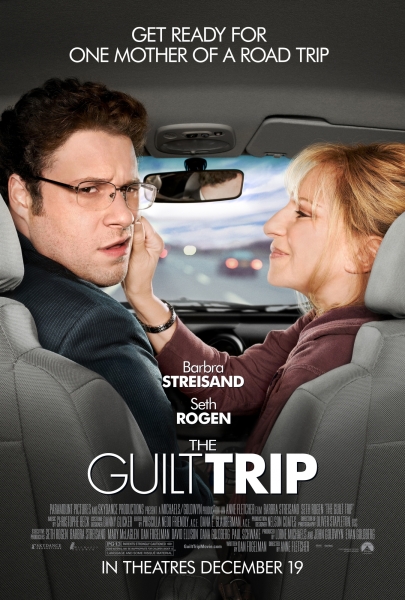 The Guilt Trip (Opens December 19th)
The Guilt Trip is a Comedy directed by Anne Fletcher and written by Dan Fogelman. It stars Barbra Streisand and Seth Rogen. It was originally titled My Mother’s Curse.

When I first heard about the film I was like “YES, I’m totally taking my mom to the screening”. The story is about an inventor Andrew Brewster (Rogen) who invites his mother Joyce Brewster (Streisand) on a cross-country trip as he tries to sell his new invention — a cleaning product so safe you can drink it and not die.

While his mother accuses him of trying to get as far away from her as possible by attending school in California leaving his New Jersey home behind, she starts laying on the guilt trip.  Andrew (either intimidated, or perhaps lonely), decides to invite his mom to travel with him by car across country while attending sales meetings along the way, pitching his new product.  As you can guess, the film plays out as predictable as ever with no surprise at the end. At first he regrets inviting his mom along, but by the end of the film they realize that they’re both human beings, people who can relate like friends despite their age.

It’s a decent film, both actors (Streisand and Rogen) work perfectly together as a very believable mother-son relationship. But despite what the trailers may portray, this is not a typical Seth Rogen hysterical Judd Apatow film. One might expect an audience for this movie of diverse generations. The older fans coming for Streisand expecting her to burst into song, while the young-ones will show up expecting Pineapple Express. Though the film is funny, it’s more like second-hand Woody Allen funny. Still a decent story, but not a “Holiday Blockbuster”.  There is no special surprise or Academy award winning acting here. I give The Guilt Trip a 5/10