It is Friday, and you know what that means… NEW MOVIES! This weeks new movie reviews include: Playing for Keeps, Deadfall. 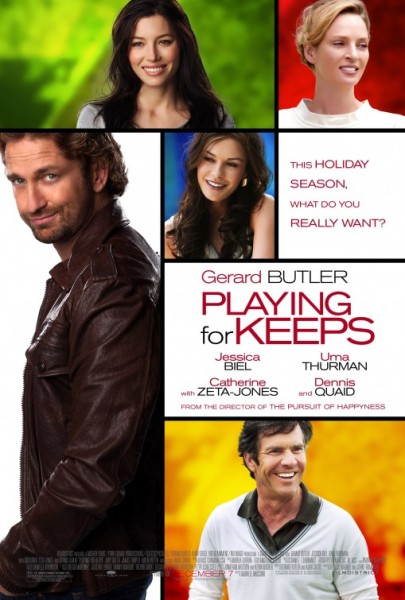 Playing for Keeps
Playing for Keeps had the potential to pull off a successful comedy. With Butler’s success in other romantic comedies like The Ugly Truth, it showed promise. With a star studded cast; Catherine Zeta-Jones, Judy Greer, Uma Thurman, Gerard Butler, Jessica Biel, Dennis Quaid, amongst others. You think it would be comedic gold – especially this time of year when it’s supposed to be high quality Oscar contenders – but unfortunately “Playing for Keeps” falls short.

It follows a former sports star (Gerard Butler) who’s fallen on hard times and decides to start coaching his son’s soccer team as a way to get his life together. His attempts to become an adult are met with challenges from the attractive soccer moms who pursue him at every turn.

The overall film is flat, unfunny and almost torturous to sit through. It is truly baffling that all the talented acclaimed actors involved actually read this script and then agreed to devote their time to something so bland. It’s unfortunate to say that all of the characters have no depth or energy. It’s so bad you really have no emotional investment in the story which makes it very easy to fall asleep and frankly care less about whatever garbage is happening on screen.

If the acting wasn’t bad enough the story doesn’t help. It’s incredibly flimsy to begin with so it made no sense when they decided to make things more complicated by adding an even more pointless subplot in which George aspires to be a sports anchor and magically gets a job on ESPN as an analyst (just after one interview) despite having zero on-air experience, but hey, that’s the magic of film right?

This is not entirely surprising, given that director Gabriele Muccino’s previous American credits include two terrible Will Smith dramas, (The Pursuit of Happiness and Seven Pounds.) It comes down to the fact that Muccino simply doesn’t know how to fix the script or manage his actors, which in turn creates garbage as the end result.

I guess the real question is why is Playing for Keeps being released in the heart of awards season rather than awaiting the wasteland of February or March? Never the less this film is forgettable and not worth the time which is why I’m giving Playing for Keeps a 2/10. 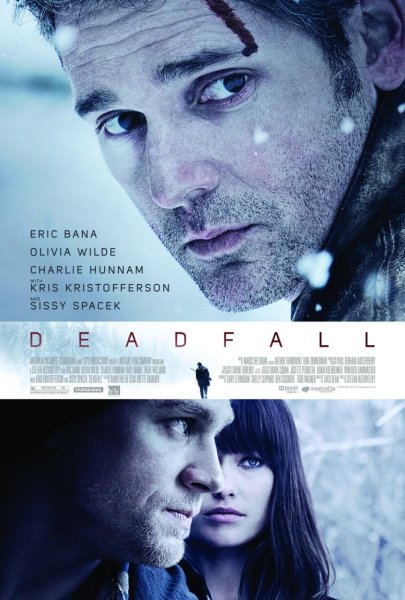 Deadfall
As soon as Deadfall opens, we know it means business, scenes flash before our eyes — a burglary, a car crash, shots fired, dollars flying through the air — Who are these people? What happened? What’s going on? Unfortunately, as it turns out, the answer is pretty stupid, and really not worth pursuing.

Siblings Addison (Eric Bana) and Liza (Olivia Wilde) are on the run from a casino heist gone wrong. When a car accident leaves their wheel man and a state trooper dead, they split up and make a run for the Canadian border in the worst of circumstances – a near whiteout blizzard. While Addison heads cross-country, creating mayhem in his wake, Liza is picked up by ex-boxer Jay (Charlie Hunnam), en-route for a Thanksgiving homecoming with his parents, June (Sissy Spacek) and retired sheriff Chet (Kris Kristofferson). It’s there the siblings are reunited in a terse and thrilling showdown that pushes the bonds of family to the limit.

I’m a big fan of Eric Bana, I loved him in Chopper, and most recent Hanna, but Deadfall doesn’t allow him to portray his talent. He runs around with a weird accent and a confused look on his face for most of the film. Olivia Wilde is always easy on the eyes, but even with her sex appeal no actors (despite how talented) could redeem this film. The only thing Deadfall has going for it is the sex and violence and even that is reaching. There is an entire sex scene filmed from start to finish, foreplay to climax, as if someone decided to put the film on hold and make a porno instead.

Don’t get me wrong, usually I’m all about the sex and violence, but there is a time and place for everything, which is the main problem for Deadfall. The only cohesion in the entire film is violence. There is action and pressure-packed situations but most scenes are overplayed and with the lack of real story it all feels more like an idea for a
film rather than a film itself with an ending as implausible as it is inevitable.

Ruzowitzky (The Counterfeiters) may be an occasionally interesting visual stylist, but storytelling-wise, his second English-language effort couldn’t be more stillborn. At its best this film feels like a DVD you buy at a drug store on a whim — you buy it in the $5 bin, watch it once, and then never pick it up again.  At its worst, it convinces you that you are the biggest sucker in the world for actually spending time and money to see this monstrosity in the theatre. I give Deadfall a 2/10