It is Friday, and you know what that means… NEW MOVIES! This weeks new movie reviews include: Life of Pi, Red Dawn, The Silver Linings Play Book, Rise of The Guardians. 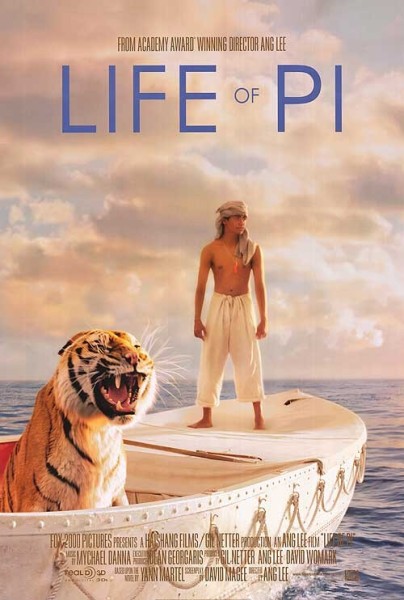 Life of Pi is based on the novel (that almost wasn’t published) with the same name by Yann Martel. The film is directed by Ang Lee and stars Irrfan Khan, Gérard Depardieu, Tabu, Suraj Sharma, and Adil Hussain.

The story centers on Pi Patel the precocious son of a zoo keeper. Raised as Hindu, PI is introduced to Christianity and Islam, and starts to follow all three religions as he “just wants to love God.”

When his family decides to leave India for Canada he soon finds himself shipwrecked adrift in the Pacific Ocean on a 26-foot lifeboat with a zebra, a hyena, an orangutan and a 450-pound Bengal tiger named Richard Parker, all fighting for survival.

Pi survives 227 days in the lifeboat, often half delusional with thirst and hunger and uses the animals to represent real people (or at least that was the version I believed.) SPOILER: in the film PI talks to the Maritime Department in the Japanese Ministry of Transport about the shipwreck. They seek to ascertain why the ship sank, so they interview Pi, but they do not believe his story.

Pi then tells a similar story, but this time without animals. Instead, he recounts a story of human brutality, being adrift on a lifeboat with his mother, a sailor with a broken leg, and the ship’s cook, who killed the sailor and Pi’s mother and cut them up to use as bait and food. Parallels to Pi’s first story lead the Japanese officials to believe that the orangutan represents his mother, the zebra represents the sailor, the hyena represents the cook, and Richard Parker is Pi himself. Pi asks if this new story is acceptable, or if he should change any parts that are still too unbelievable; the officials change the subject back to the sinking of the ship. After giving all the relevant information, Pi asks which of the two stories they prefer. Since the officials cannot prove which story is true and neither is relevant to the reasons behind the shipwreck, they choose the story with the animals. Pi thanks them and says, “And so it goes with God”. : END

The film is visually pleasing with beautiful CGI and 3D effects, yet doesn’t rely on visuals (like most films) to capture its audience because the actors do such a great job portraying the complex and deep story that the visuals end up being a bonus like icing on a cake.

Despite what the previews may depict, the film  should not be compared to Avatar. If anything the film is  a dark version of Noah’s Arc. He tries to understand God through the lens of each religion and comes to recognize benefits in each one.

“Life of Pi” is one of those films that will have you thinking and talking about for days upon leaving the theatre. I give “Life of Pi” 8/10 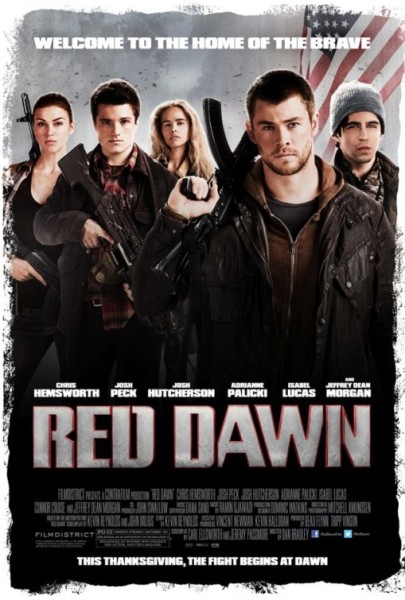 RED DAWN (Rated PG-13, running time: 93min)
Red Dawn is a remake of the 1984 film of the same name – just like everything these days — nothing is original. Directed by Dan Bradley it follows a group of young people (Chris Hemsworth, Josh Peck, Josh Hutcherson, Adrianne Palicki, Isabel Lucas, and Jeffrey Dean Morgan) who defend their hometown (Spokane, Washington) from a North Korean invasion.

I know what you are thinking, “of all places the North Koreans can attack/takeover why Spokane?” Whatever the case maybe,  sooner than later the town’s citizens are taken prisoner, except for a group of young people calling themselves ‘The Wolverines’ after their high school mascot. They band together in the surrounding woods and like an 80’s montage, they train and organize themselves into a group of guerrilla fighters in order to liberate their town.

The film overall is cheaper than its 80’s counterpart. The 80’s film seemed more “realistic” for the times and unlike this version, the acting is by far better. “Red Dawn” has action, sure, but the story is so weak, and the acting so poor, even the action couldn’t stop me from wanting to bang my head into my armrest.

If you are planning on watching “Red Dawn” this weekend, check your television listings because the original has been playing all week. I give “Red Dawn” a 4/10 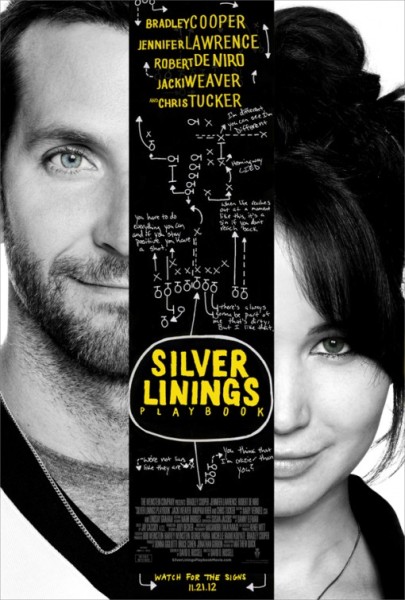 SILVER LININGS PLAYBOOK (Rated R, running time: 122min)
Silver Linings Playbook is a new romantic comedy-drama that I’ll be honest with you, never heard of until this last couple weeks. The film is directed by David O. Russell and adapted from the novel of the same name by Matthew Quick.

Pat Solitano (Bradley Cooper) has lost everything – his house, his job, and his wife. He now finds himself living back with his mother (Jacki Weaver) and father (Robert De Niro) after spending eight months in a state institution on a plea bargain. Pat is determined to rebuild his life, remain positive and reunite with his wife, despite the challenging circumstances of their separation.

All Pat’s parents want is for him to get back on his feet and to share their family’s obsession with the Philadelphia Eagles football team. So when Pat meets Tiffany (Jennifer Lawrence), a mysterious young woman with problems of her own, things get complicated.

Tiffany offers to help Pat reconnect with his wife, but only if he’ll do something very important for her in return. As their deal plays out, an unexpected bond begins to form between them, and “silver linings” appear in both of their lives.

The script is different as it throws a unique twist on what society considers being a “healthy” relationship. The acting overall works. I’m a big fan of Robert De Niro in pretty much everything he does and he doesn’t disappoint. The heart of the film is Bradley Cooper and Jennifer Lawrence. Luck for us they complement each other enough that their chemistry on-screen (most important) is believable. 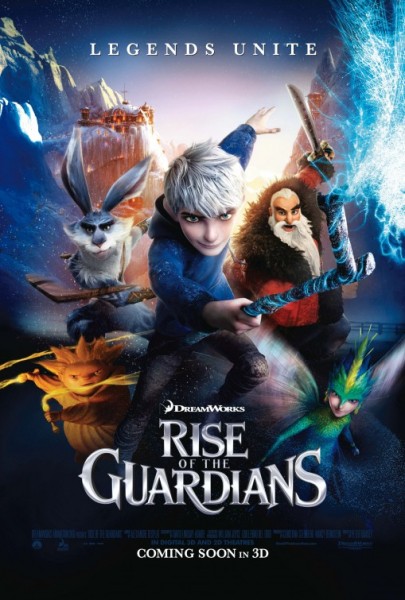 RISE OF THE GUARDIANS (Rated PG, running time: 97min)
Rise of the Guardians is the new 3D fantasy-adventure film based on William Joyce’s The Guardians of Childhood book series and The Man in the Moon short film. Produced by DreamWorks Animation and directed by Peter Ramsey the film follows Jack Frost (Pine) is a carefree boy who has no responsibilities in the world aside from bringing winter wherever he goes.

Everything changes when Pitch (Law), the Nightmare King, begins his plan to engulf the world in darkness. The Guardians, Santa Claus (Baldwin), the Tooth Fairy (Fisher), the Easter Bunny (Jackman) and the Sandman enlist Jack to join their group to stop Pitch and protect the children of the world. It’s a fun little adventure for kids, but it’s not for “older kids”. It’s not one of those films that adults can be entertained by while watching it with their young ones. It’s more of a renter, slap it in your DVD player and let the kids watch well mommy and daddy have some “alone time”, type of film.

If your kids are bugging you to watch a film at the theatre, take them to “Wreck-It-Ralph”. Though Guardians is good for what it is, it’s not theatre money good. I give “Rise of The Guardians” a fair 5/10