It is Friday, and you know what that means… NEW MOVIES! This weeks new movie reviews include: Jack Reacher, This is 40, Django Unchained, Les Misérables, Parental Guidance. 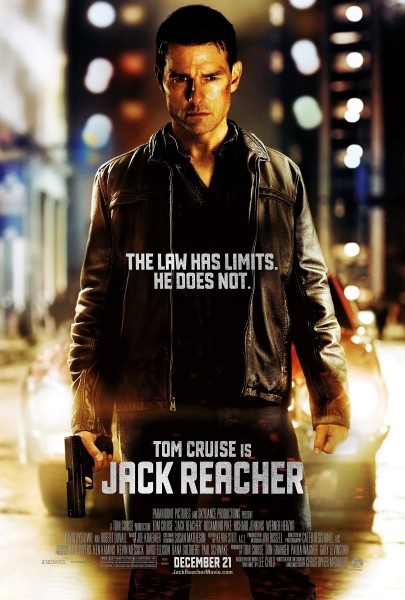 Going into this film I was skeptical thinking it would be a Mission Impossible meets The Bourne Identity knock-off, but Jack Reacher proved me wrong. The opening scene is intense (and may not be in best taste with the recent real-life shootings). It involves a sniper shooing randomly in a public setting killing five people in Pittsburgh. Quickly police arrest a man named Barr (Joseph Sikora), who asks them to contact Jack Reacher, a drifter and former Army Military Police officer. Working as an investigator for Barr’s defense attorney, Reacher unravels a case involving a hired killer and a Russian known only as “the zec” played by Werner Herzog.

To describe the plot of Jack Reacher any further would ruin the film. My only piece of advice is to make sure you show up on-time and pay close attention during the opening scene. It may seem insignificant at first, but will become significant later on.

When it comes to action, Jack Reacher has it. The action sequences are exhilarating without being mind-numbing and tedious like in most modern action thrillers. Tom Cruise may not have the height and build as the Jack Reacher from the novels, but he pulls it off by using his head to fight smart – disabling any foe in his way.

The best part of the film is it’s flow, moving quickly by cutting out any cheesy romantic subplot between Jack and Helen –which is a nice change as it’s very rare to come across a focused, effective suspense thriller. Another plus is the story doesn’t make you think, then re-think, and think some more by being easy-to-follow repeating key elements via flashbacks in case you might have forgotten them. If they weren’t repeated the film might have become too confusing and tiresome rather than exciting and thought-provoking.

Despite the fact you can probably figure out who the sniper is before third act arrives isn’t a big deal. The film keeps you on the edge of your seat as you try to figure out who is telling the truth,  how are they all connected, and what was the motive behind it.   Overall I give Jack Reacher a 7/10 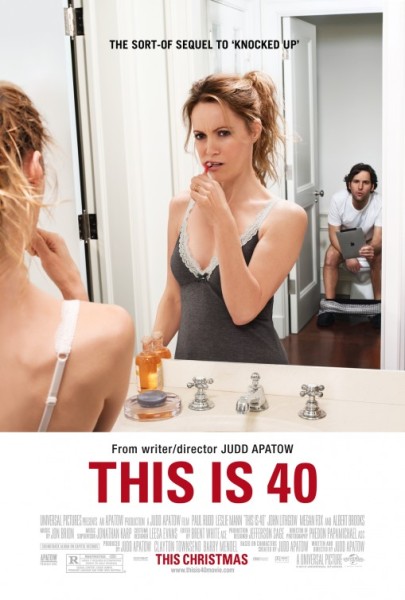 This is 40
This Is 40 directed by Judd Apatow, is a spin-off sequel to the 2007 film Knocked Up and stars Paul Rudd and Leslie Mann playing the same characters. The story isn’t anything magical — Pete (Rudd) and Debbie (Mann) – both are having a mid-life crises because they are about to turn 40. Taking a look at their lives (especially their relationship), they start to wonder what their future looks like.

The actuality movie has almost nothing to do with Knocked Up not even mentioning names of the characters from that film. I’m pretty sure trying to connect this film to Knocked Up was a simple marketing ploy. The film starts off with potential poking fun at being 40, discussing parenting, sex and life in general. As you watch their relationship unfold onscreen it becomes believable, but soon things start to fall apart. The problems start to arise as the film carries on (and on ), and on, by attempting to establish a more cohesive plot veering towards divorce.

The film has it’s funny moments, but it’s nothing like it’s predecessor Knocked Up. Most of the funny scenes have been shown in the trailer, the rest is semi-drama-esque. The characters work best when they are actually talking to each other about the real day-to-day mechanics of relationships, friendships, sex, aging and other relatable concepts, but doesn’t pack a punch on the comedy side. There isn’t anything you will take away from this film saying “you gotta see that part”.  This is 40 should never have been marketed as a comedy. A good comedy is usually 90 minutes, but this film is more on par with Apatows other “market it as a comedy” film “Funny People” and runs at a painful 134 minutes. 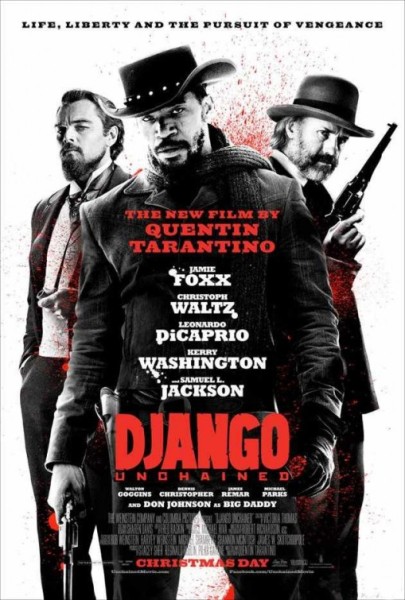 When Django is held for a slave auction, Dr. King Schultz (Christoph Waltz), a German bounty hunter who uses his former profession as a dentist as a cover, frees Django from his vicious masters, the Speck brothers (James Remar and James Russo), and gives him the option of helping him hunt down and kill the Brittle Brothers, a ruthless gang of killers whom only Django has seen. In return, Schultz will free Django from slavery completely and help find and rescue Broomhilda from the brutal but charming Francophile Calvin Candie (Leonardo DiCaprio), who owns Candyland, a plantation where male slaves are trained to fight for sport and female slaves are forced into prostitution. Django agrees, and the two go after Candie and the Brittle gang.

Django Unchained is a wonderful film; Tatantino has definitely expanded on his theme of historical revenge. Though I was disappointed that he didn’t reflect on anything from the original Django films or continue the story of the boy who becomes Django from Sukiyaki Western Django, the film by itself tells a vivid (and quite horrifying) story of slavery that is honest, graphic and at points will be hard to watch for people with weak stomachs.

The cast is magnificent: Waltz is glorious, Foxx, smoldering, Leonardo DiCaprio plays a very believable plantation owner, Kerry Washington gives a beautiful, fully developed performance in a key role, and even the supporting characters from Samuel L Jackson to Don Johnson work perfectly throughout. Tarantino doesn’t spare us from a fictional portrayal of how slaves and their owners might converse — the constant use of the N-word is consistent throughout and the film will definitely put your moral compass to test.

Like everything else this season, Django Unchained is a long movie coming in at 166 minutes. The good: It goes by really quick. The bad: The last quarter of the film lacks visual appeal from the first. The ugly: Tarantino’s love of violence clearly goes beyond a stylistic admiration and into the realm of fetish. However, putting my personally differences aside and my vendetta for it not following the original story of Django, I concede in giving Django Unchained an 8/10. 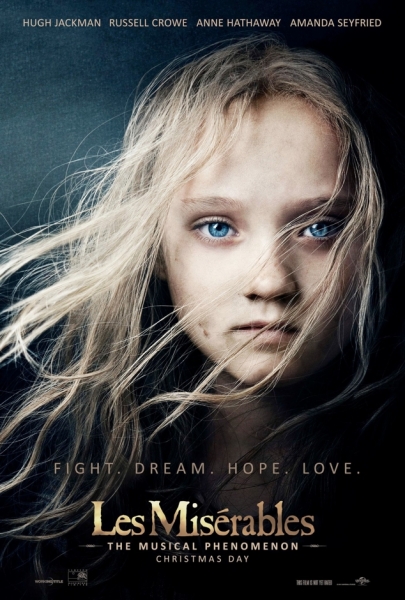 Les Miserables
Les Misérables the film, is based on the musical of the same name by Alain Boublil, Claude-Michel Schönberg and Herbert Kretzmer, which is in turn based on Les Misérables, the 1862 French novel by Victor Hugo. Directed by Tom Hooper (The King’s Speech) it’s set against the backdrop of 19th-century France and has a star studded ensemble led by Hugh Jackman and Russell Crowe. Anne Hathaway, Amanda Seyfried, Eddie Redmayne, Samantha Barks, Sacha Baron Cohen, Helena Bonham Carter and Aaron Tveit.

Les Misérables tells an enthralling story of broken dreams and unrequited love, passion, sacrifice and redemption-a timeless testament to the survival of the human spirit. Jackman plays ex-prisoner Jean Valjean, hunted for decades by the ruthless policeman Javert (Crowe) after he breaks parole. But when Valjean agrees to care for factory worker Fantine’s (Hathaway) young daughter, Cosette, their lives change forever. I could go on and on about the plot but instead I’ll just sum it up – it is a classic and epic tale adapted into a musical full of classic and epic music.

The film plays out pretty much the same as the play,  some songs have been removed due to time constraints, but all that remain are powerful and endearing. They range from emotionally draining to downright funny and there isn’t one that disappoints — which is especially interesting being how the actors sing live, with no lip synching to a pre-recorded track. Every actor who is in this film had to audition, no one got by just on their name alone, and it shows as the performances on screen are as spectacular as the visual appeal.  Les Misérables is beautifully put together, the wide-angle action shots are stunning, while the up-close intimate angles makes you feel emotionally connected to the characters and what is happening on screen.

The film does have its issues (as any film should), since it’s based on a stage play there is definitely a point where the film feels like an intermission should happen, making it feel longer than it is.  Another issue I had was with Eddie Redmayne,  he seems outclassed by most cast members around him. Though he’s decent in his individual role as Marius, when put together with Cosette (Amanda Seyfried) there is simply no chemistry — which is disappointing as it takes away from the emotional drama. I also found the first act which focuses on the desperate existences from which Valjean and Fantine try to escape, slightly more emotionally involving than the second act, which focuses on the revolutionaries.

Though the battle scenes simply aren’t as wrenching as the more personal moments, in the end, the film pulls out a finale that packs a punch and sends you out on a high note. From the acting, to the costumes, to the set appeal and the music, the film is a prestige production in every sense. Putting all the little things aside, Les Miserables is gloriously entertaining, which is why I give it a 9/10 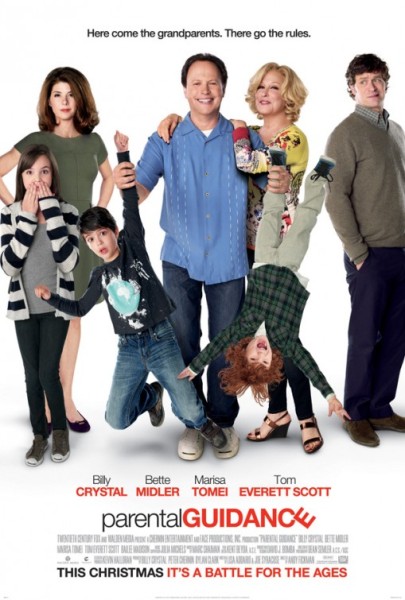 Parental Guidance
Parental Guidance (previously titled Us & Them) stars Billy Crystal, Bette Midler, Marisa Tomei and Tom Everett Scott. Directed by Andy Fickmance, the film follows Artie (Billy Crystal), who is accustomed to calling the shots, meets his match when he and his eager-to-please wife Diane (Bette Midler) agree to babysit their three grandkids when their type-A helicopter parents (Marisa Tomei, Tom Everett Scott) go away for work. But when 21st century problems collide with Artie and Diane’s old school methods of tough rules, lots of love and old-fashioned games, it’s learning to bend – and not holding your ground – that binds a family together

The film is good, but it’s not Christmas release award season good. Seeing how this is Billy Crystal’s first lead role since 2002’s Analyze That, pairing up with Bette Midler was an interesting choice and the script seems to work against them more than it does with them.

It’s definitely targeted towards an elderly crowed trying to gather laughs out of lame jokes like “bat-to-the-groin” type fluff. Maybe since I wasn’t their target audience I didn’t find it at all funny to see them  struggling to adapt to this ‘updated’ form of parenting, confusing Chinese food with ‘Pan Asian’, using politically correct ‘acceptance terms’ in place of ‘don’t’, and suffering the consequences of feeding sugar-deprived kids ice-cream cake.

Parental Guidance is a lame as watching your dad doing Gangnam style in-front of your friends. The actors have so much more experience and talent doing what they do, but the script is so weak, they just fall flat. With an underdeveloped resolution that ties everything up all too neatly, it’s family fluff at it’s finest. Though it may work for some, you’ll find smarter and more ambitious humour in a Television sitcom. Parental Guidance is a waste of Award season space, which is why I give it a 2/10