Vancouver based Force Four Entertainment is at it again with their new show “Border Security: Canada’s Front Line” Every day, tens of thousands of people arrive at Canada’s border crossings. Most are legitimate travelers, but not all of them. From Canadian citizens with undeclared food to international drug smugglers; from confused visitors to phony immigrants; from impaired drivers to wanted felons. Border services officers see them all, and need to figure out which is which – keeping Canada safe from threats of all kinds, big and small.

Cameras document the officers as they interrogate suspicious passengers from around the world. They meet illegal workers posing as tourists and visitors smuggling contraband. They find toys packed with drugs and weapons disguised as cell phones. Some of the travelers lie and argue, while others play the victim or plead ignorance. Through all of these encounters, officers are ready with an arsenal of investigative tactics. Each episode follows CBSA officers on actual cases as they examine those travelers that raise suspicion, chipping away at the inconsistencies until the truth is finally revealed.

“They have an enormous responsibility,” said Rob Bromley, Executive Producer and Partner, Force Four Entertainment. “The CBSA officers rely on technology and instincts to uncover the truth. Viewers witness real-life situations that are tense, dramatic and at times even bizarre. And of course sometimes they’re just legitimate travelers who have had something unfortunate in their story that triggers the officers’ interest or requires their assistance. It’s the investigation that’s so compelling.”

Vancouver International Airport (YVR) is one of Canada’s biggest gateways. “Border Security: Canada’s Front Line” – is a revealing look at how difficult their jobs truly are. It reminds me of that incident in 2010. The Canada Border Services Agency calls it an “unbelievable case of concealment.” When a young man boarded an Air Canada flight in Hong Kong disguised as an elderly man. After landing in Canada, Border Services Officers (BSOs) escorted the man off the plane where he “proceeded to make a claim for refugee protection”. 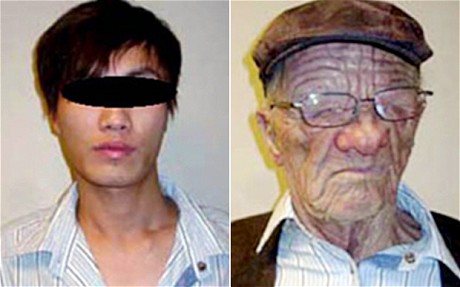 The “young man” initially claimed to be in possession of one bag; however, the BSOs obtained two additional pieces of luggage which were believed to belong to him. One bag contained personal clothing items while the second contained a pair of gloves. The third contained a ‘disguise kit’ which consisted of a silicone type head and neck mask of an elderly Caucasian male, a brown leather cap, glasses and a thin brown cardigan.

Vancouver Border Security Officers’ will question, cross-examine, inspect, pat down, swab, search and x-ray suspects and their belongings – until each passenger’s secret is finally revealed.