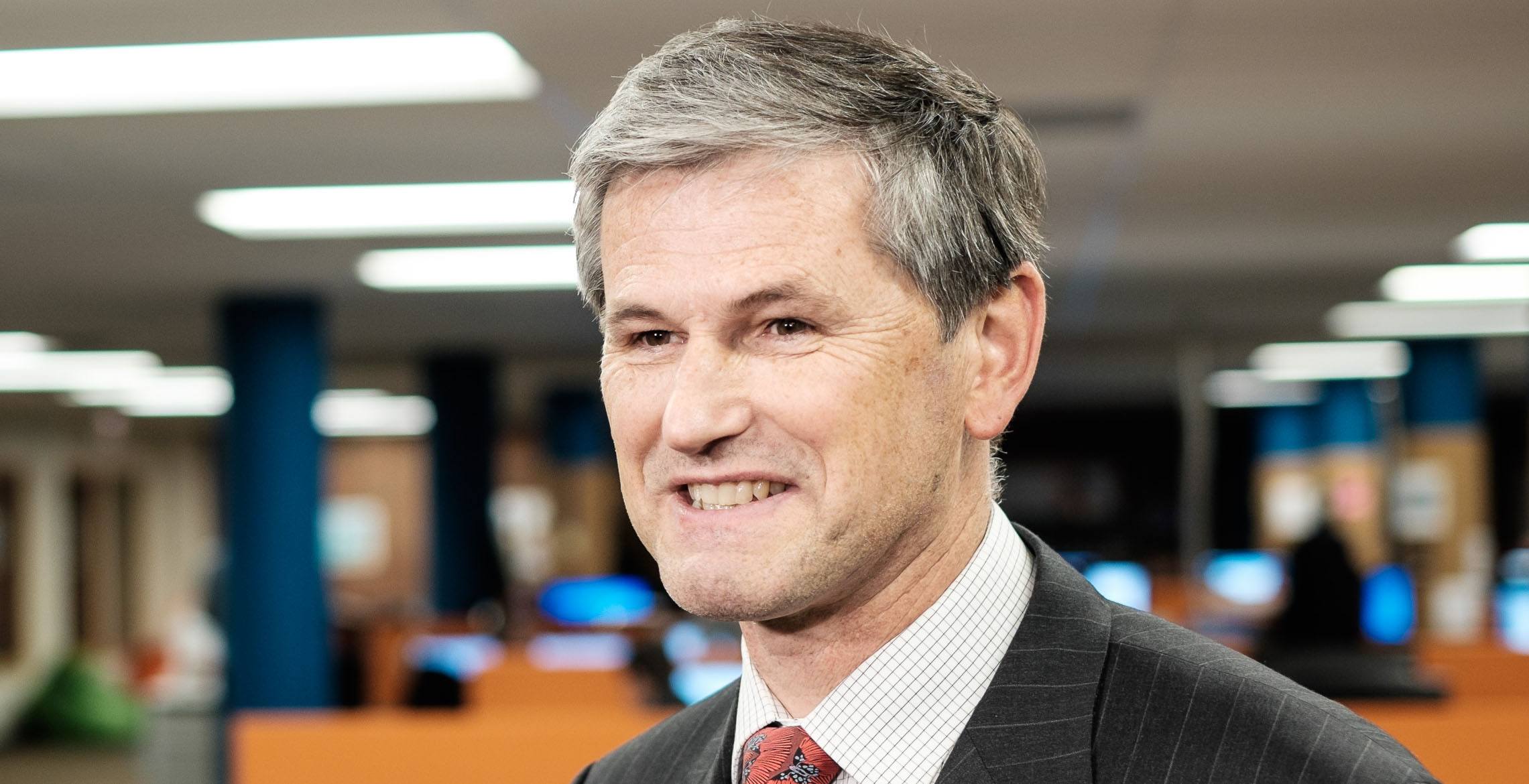 Andrew Wilkinson has been elected the new leader of the BC Liberals, six months after former BC premier Christy Clark resigned.

Wilkinson has been MLA for Vancouver-Quilchena since 2013, and served in Clark’s government in various cabinet positions.

His longest stint was as Minister of Advanced Education between 2014 and 2017. Between 1998 and 2001 he served as president of the BC Liberals.

Clark stepped down after failing to form a minority government when the BC election left the legislature hung in May last year.

By July, the BC NDP had formed a minority government with the support of the BC Greens; Clark resigned as BC Liberals leader in August.

“This has been a long process. And for our party, it’s an essential process,” Wilkinson said in his victory speech.

“What made this possible was all of you. Think back to this room in 2001 when Gordon Campbell stood up here and had a 77-2 victory over the NDP. Think about that. This room,” Wilkinson said to BC Liberals members at downtown Vancouver’s Sheraton Wall Centre.

“In 2013 when Christy came from behind and wiped out the NDP. In this room. And that is the heritage we have to build on as a party. That is where we came from and that’s what we have to honour and respect. The people in this room and the people at home who put heart and soul into this organization for 25 years to bring us here today.” 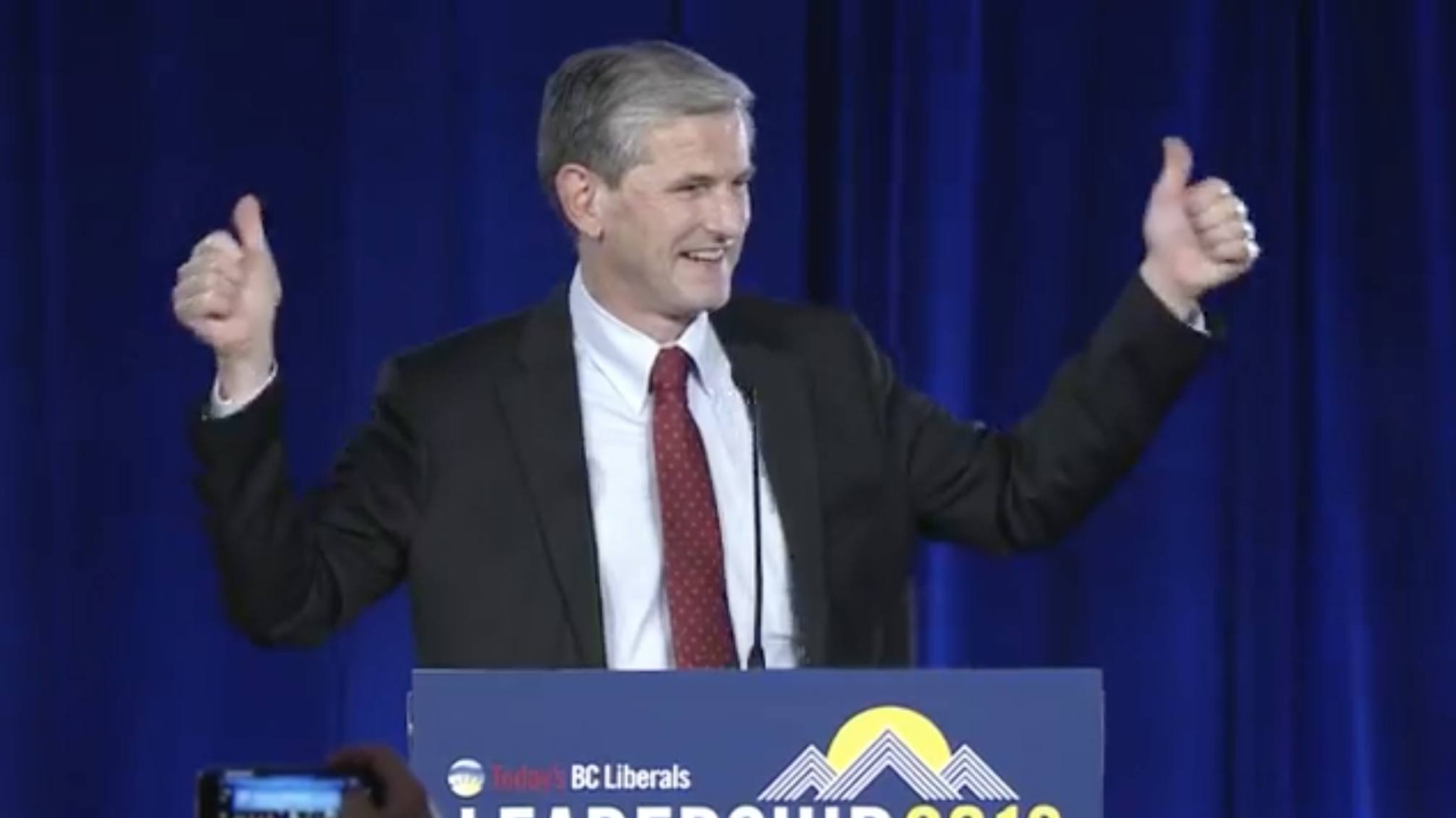 Andrew Wilkinson during his BC Liberals leadership victory speech on February 3, 2018 (BC Liberals/Facebook)

“But we have to respect that work and understand those values that got us here. Those values of enterprise, allowing individuals and companies and people to get ahead in our society. That’s why we do this work. Thinking about fiscal responsibility, that we are the party that does not spend our children’s money.

“And above all else, opportunity. Because British Columbia has to remain that shining, guiding beacon that brings people from all over Canada and all over the world to realize their dreams right here in BC. That’s why we do this work.”

“The challenge that is put at our feet today, is to say, take those Liberal values, build out this party, let’s listen to Todd Stone and Michael Lee and blow open the doors and windows, and broaden our appeal.”

“All of this work has one purpose: to bring that set of Liberal values into that living dream in British Columbia that this can be the very best place to live in the world under a BC Liberal government – after the next election.”

After the first ballot was counted, Dianne Watts lead with nearly 25% of the vote. In a preferential, or ranked, vote, the candidate with the lowest number of votes is eliminated, so former Vancouver Mayor Sam Sullivan was knocked out of contention. 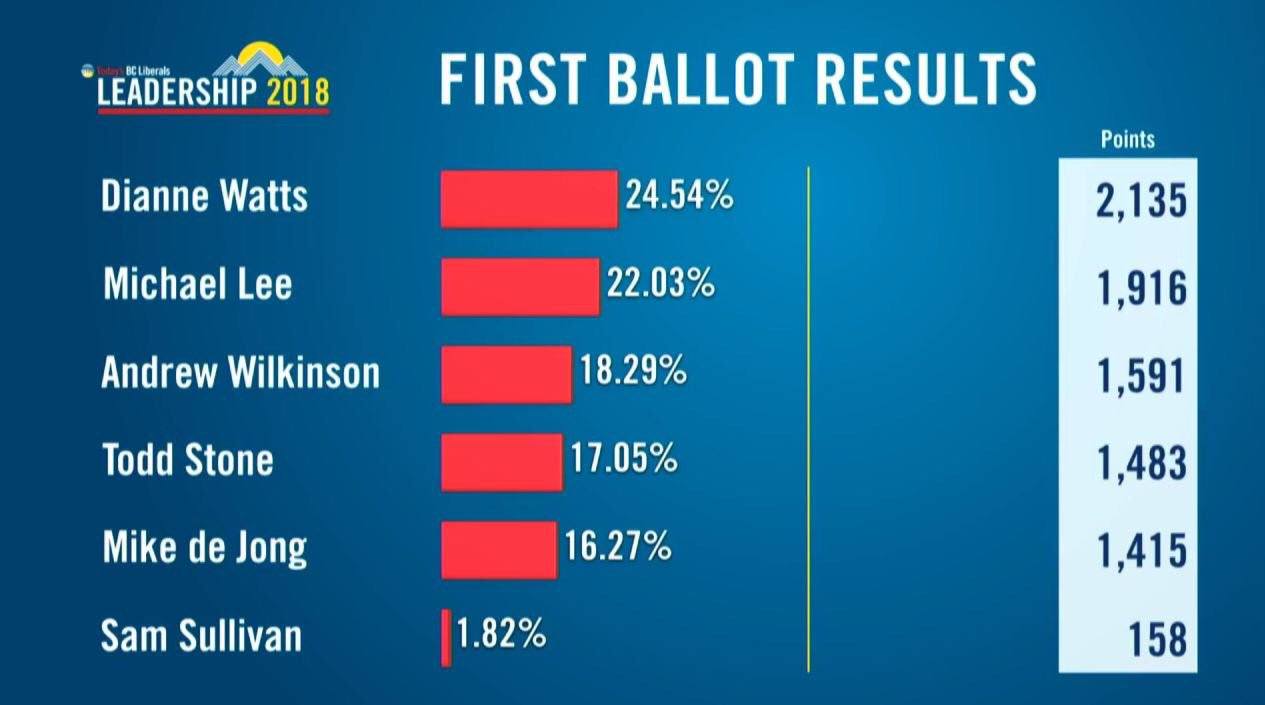 I’d like to thank everyone for their support and to wish good luck to the future leader of our @bcliberals Party. Our party is even stronger after this race 🙏 #BCLib18 pic.twitter.com/qZy6eioBTl

After the second ballot was counted, not much changed. Going into the third, Mike de Jong was eliminated and his votes were distributed. 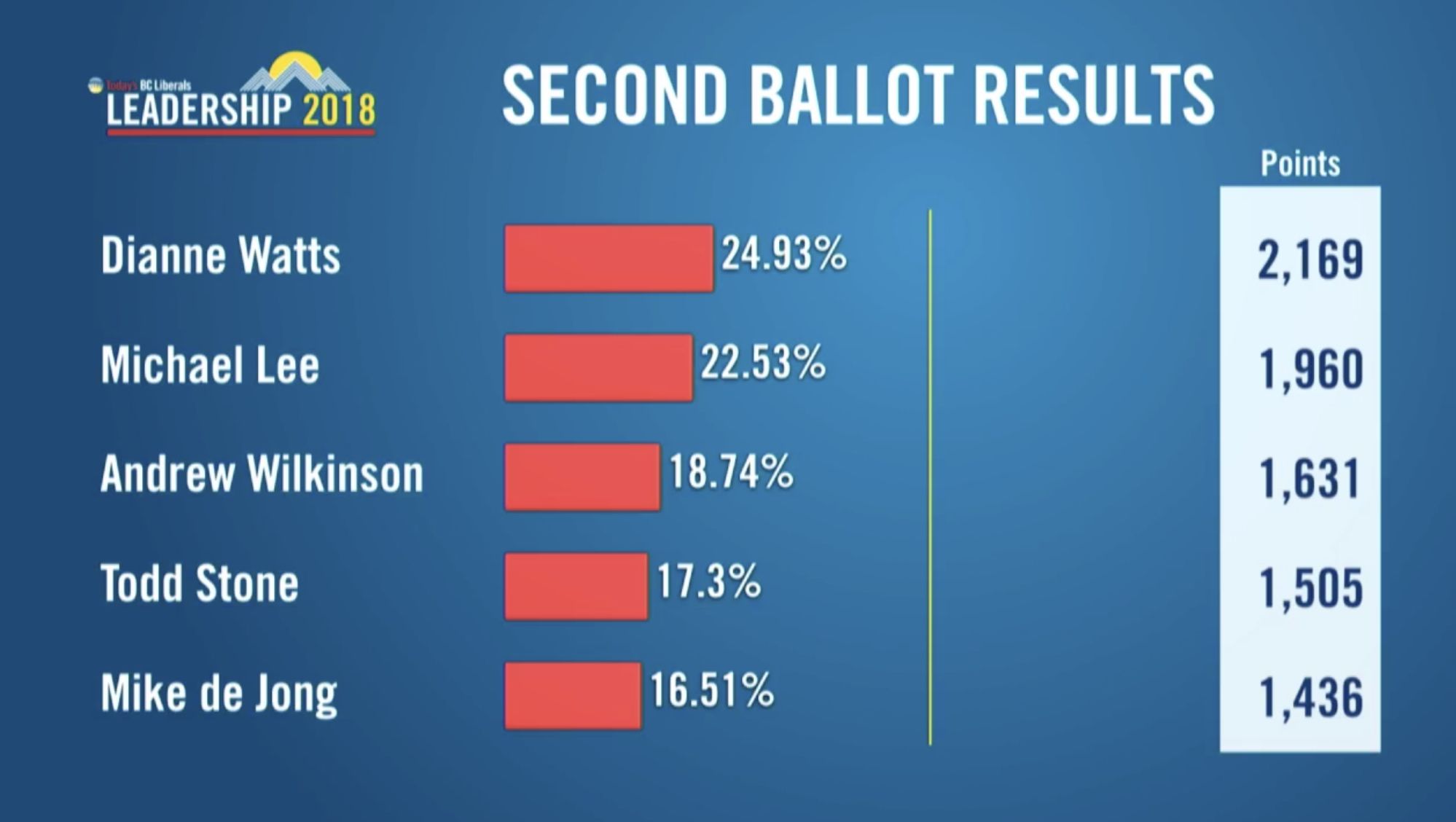 After the third ballot was counted, Watts maintained her lead with Wilkinson and Michael Lee trailing closely behind. Todd Stone was eliminated going into the fourth ballot. 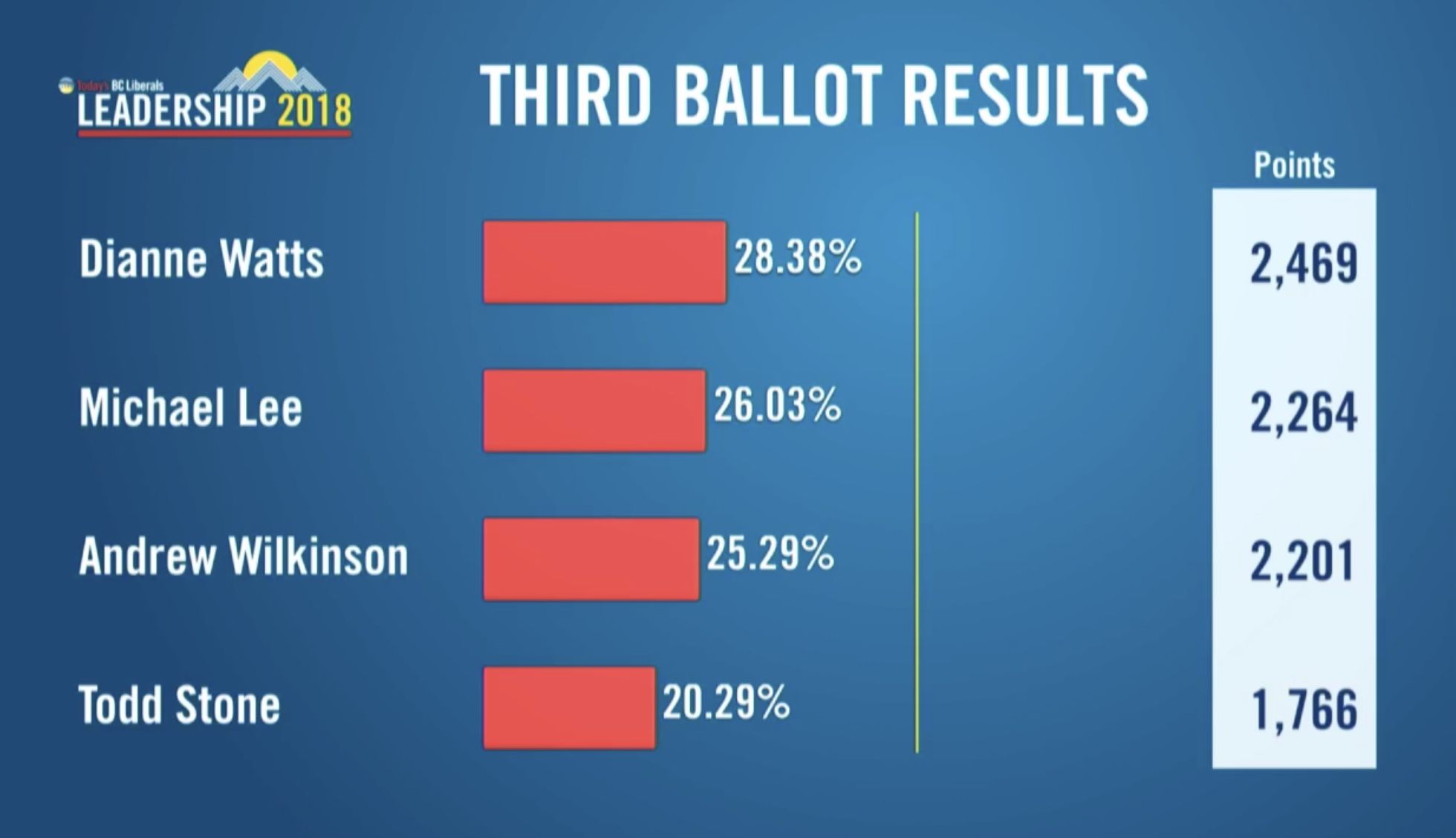 After the fourth ballot was counted, no candidate held a majority. With the lowest number of votes, being edged out by Wilkinson by just 30 votes, Lee was eliminated taking this to a fifth and final ballot between Wilkinson and Watts. 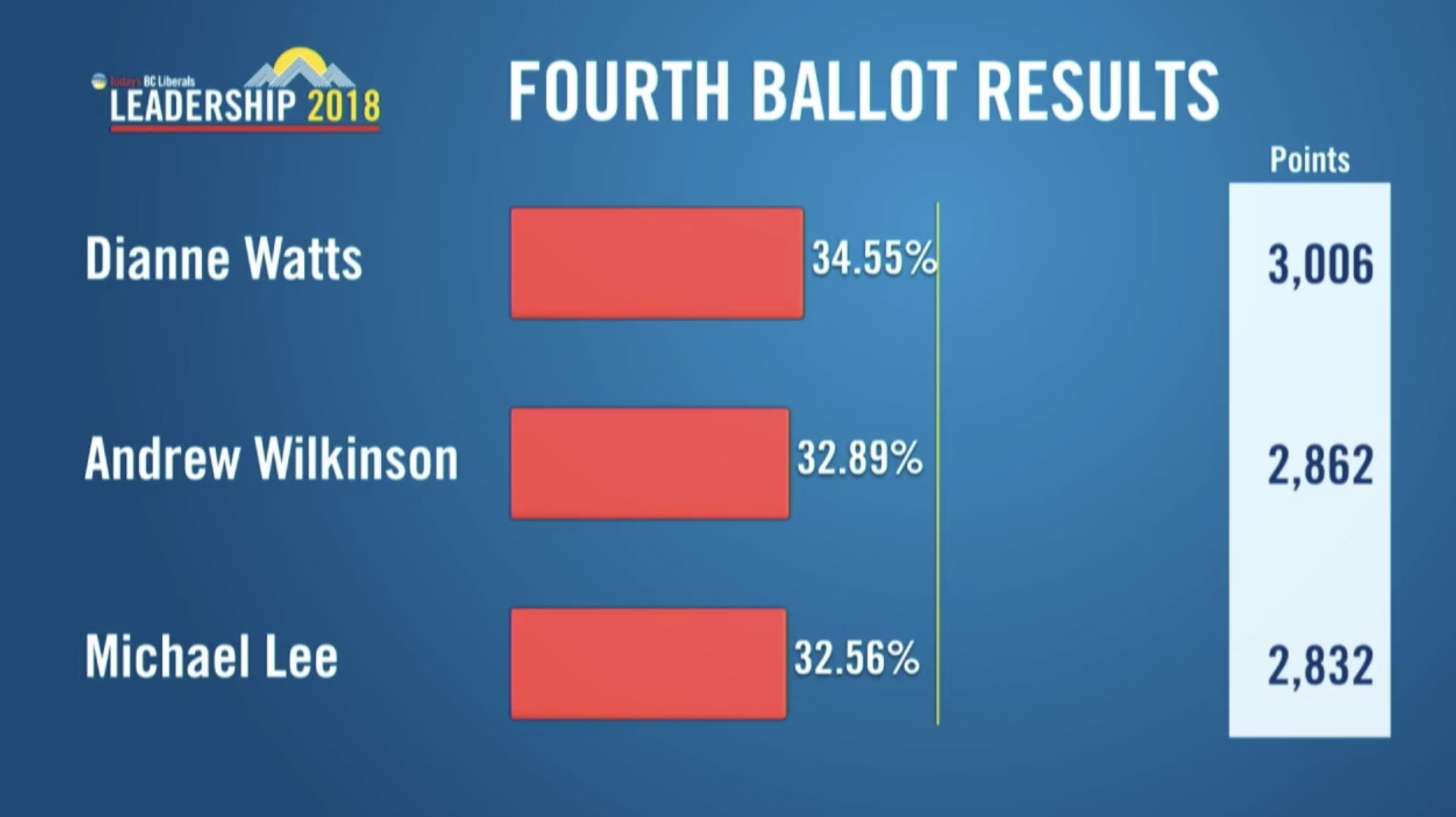 The fifth and final ballot saw a result. After Lee’s 2,832 votes were distributed, Wilkinson came out on top, being elected as the party’s new leader. 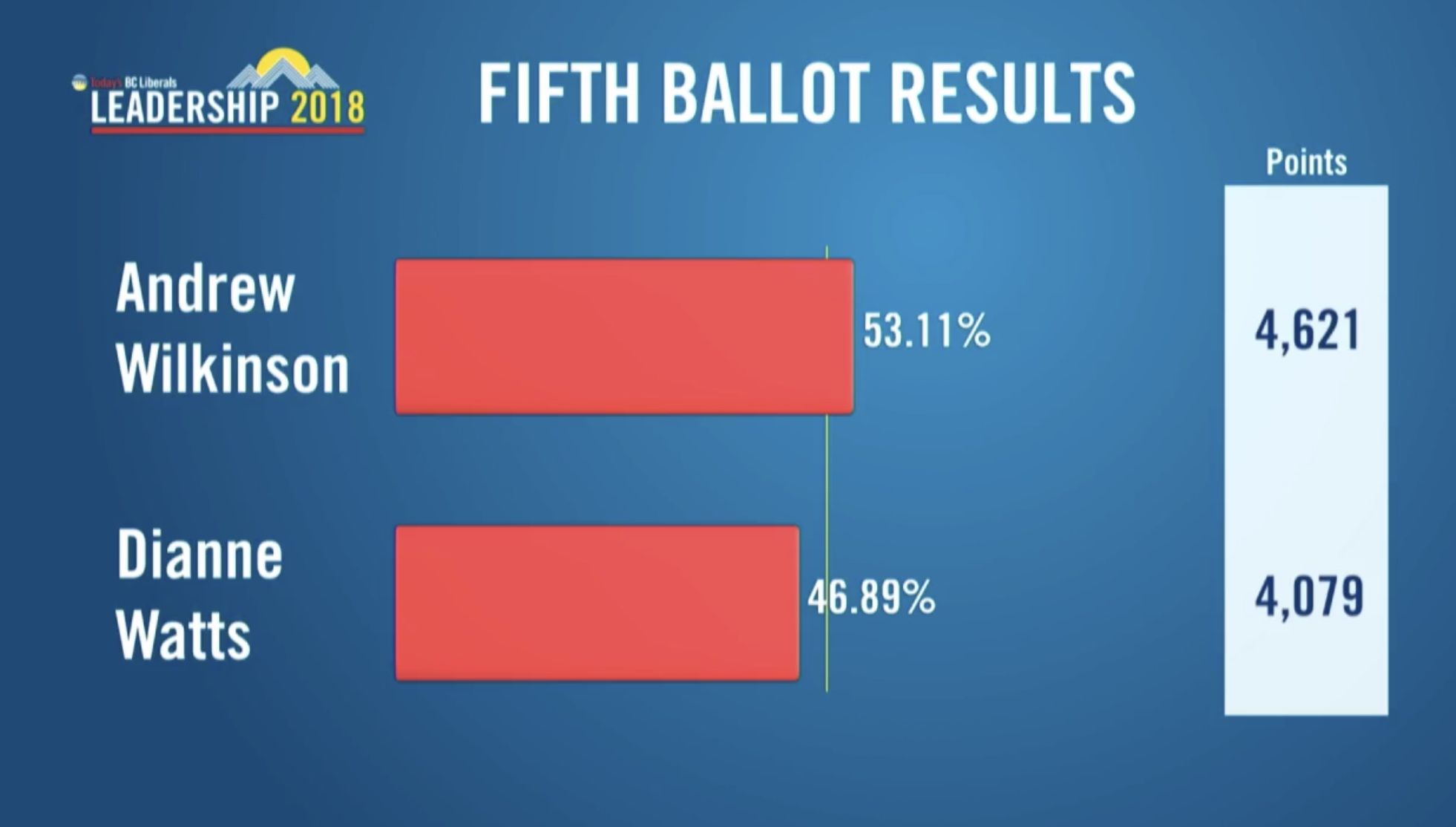