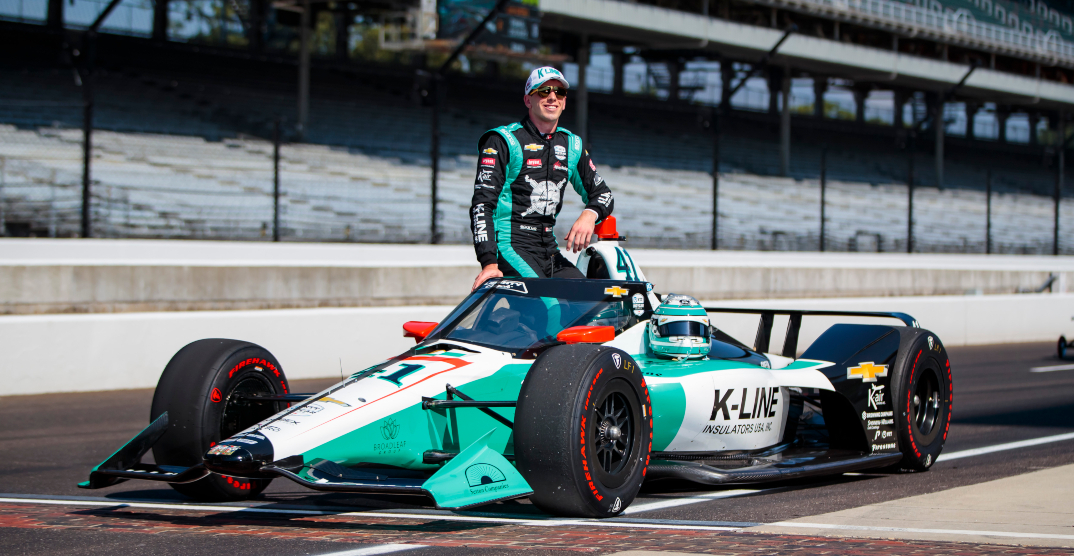 For someone who spends so much of their time looking ahead at the next turn, Canadian IndyCar driver Dalton Kellett doesn’t forget to look up and stare at the sky.

Not when he’s driving at nearly 200 mph in a race on a hot spring afternoon, of course. That would be too dangerous, for many obvious reasons.

But when he gets a chance to unwind away from the track, one of Kellett’s self-described ‘nerdy’ hobbies has been constructing a high-tech telescope with the help of his girlfriend, Nicole Westra.

The 27-year-old Kellett finished 23rd for Team AJ Foyt at this weekend’s Indy 500, his second go at the sport’s premiere event and an improvement on last year’s 31st place finish.

In many ways, Kellett has got the hobbies of your average mid-20s active individual: rock climbing, hiking trails in BC, and just experiencing the outdoors as often as possible.

But ask anyone who’s met the engineering physics graduate of Kingston’s Queen’s University and they’ll tell you how methodical and dedicated he’s been to his racing craft for years, but also how he’s intensely invested in learning about, well, just about anything scientific.

He knows he has to be like that, though, in a sport and a lifestyle as technical as his. After four full seasons in the lower-level Indy Lights circuit from 2016 to 2019, Kellett graduated to the IndyCar circuit in 2020, albeit in a shortened schedule.

Kellett was known to be going through the rigours of a degree at one of Canada’s top schools while also competing through various circuits across North America.

Now that he’s made it to the highest level of his sport, Kellett is constantly looking at improving and is chasing his first career IndyCar win.

“I’m working on getting the most of myself, what the car needs, and working on driving technique,” Kellett said. “Of course, every driver wants to win the [Indy 500].”

F1 racing was Kellett’s first love, he said, but he realized that his best route for a racing career was through the IndyCar circuit, following in the footsteps of drivers like James Hinchcliffe and Paul Tracy. Kellett just made the cut for this year’s race, qualifying in the 10th of 11 rows in the outside position.

Hinchcliffe was the other Canadian in the field for this year’s Indy 500, finishing 21st after qualifying in the 16th spot.

Kellett’s daily schedule is typically about a 12-hour workday in competition season, from about six in the morning until six at night. The Indy 500 comes with so much pre-race lead-up compared to any other event, that Kellett said he felt relief once he was able to begin driving on Sunday.

“Weirdly, you’re actually calmest when you finally get behind the wheel,” he said. “You hardly have any time to sit down and breathe, it all happens so fast. It’s the first calm moment you have all day.”

A native of Stouffville, Ontario, but based in Indianapolis for most of the year, Kellett said it’s been an interesting time the last year living and competing in the United States while communicating with friends and family back home.

He’s disappointed he didn’t get the chance to race in the cancelled Molson Indy in Toronto in either of the last two years, but understands the restrictions were still necessary as part of Canada and Ontario’s pandemic response.

“It wouldn’t have been safe to do that,” he said.

May is traditionally the most hectic month on any IndyCar calendar, with the famous 500 race capping things off on the Sunday of Memorial Day Weekend.

This year’s race attracted a 40% capacity, or about 135,000 spectators. Brazil’s Helio Castroneves was the victor of this year’s event.

Last year’s race was much different, however, as it was without the typical crowd due to the COVID-19 pandemic.

“It was so strange with just the teams and our crews there,” he said. “It was a striking difference this year, so I’m just taking the time to appreciate it all.”