Tori Holmes confesses that her company, Nectar Juicery, has acquired a bit of a cult following since its launch about two years ago. The cold pressed juice biz, which she owns along with YYoga co-founder Lara Kozan, has been nurturing clients with their juice cleanses and in-office juice-on-tap offerings, but is now poised to open their first permanent retail location. 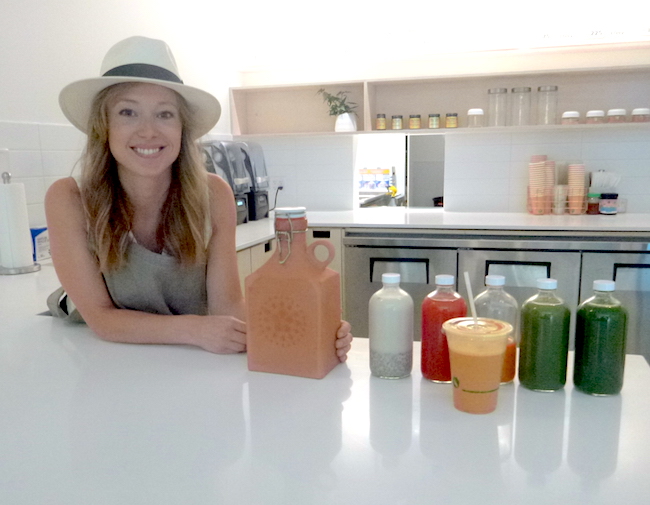 Situated in a bustling and burgeoning section of West Hastings (their next-door neighbour is the recently-opened second Prado café location), the small storefront is cool and calming inside, and is staffed with a savvy army of health sages who can help customers navigate their innovative menu.

Holmes explains that Nectar’s juices stand out because of the alchemy by which they are produced. It’s a slim selection of flavours, each based on a desired wellness outcome for the drinker. Energizer, for example, is a vibrant orange-coloured juice made with carrot, orange, Hawaiian turmeric, ginger, lemon, and black pepper, and is designed to heed the call of the late afternoon grumbles, when you might otherwise reach for a coffee or a junky snack for that kick of energy.

Nectar uses only organic ingredients in their juice. Holmes says this is because of the nature of how juice works in the body. The nutrients in juice enter the bloodstream directly, bypassing digestion, and Holmes believes that it is vital that the produce they use be the healthiest for bodies because of this consideration.

Juice has certainly become a popular diet or lifestyle option, with juice bars popping up all over the city, but for Holmes embracing juicing was part of a multi-faceted journey to wellness she embarked upon following a very treacherous time in her life.

Holmes was just 21 years old in 2005 when she became the youngest woman to cross the Atlantic in a 24-foot rowboat. The journey was harrowing, and took nearly three months to complete. At the end of the trek, Holmes was physically depleted, having lost over 30 pounds and broken several ribs, and her body had begun to atrophy. Further, Holmes said after the row she faced early stage breast cancer.

She studied holistic nutrition, and began to understand the science behind what had happened to her body, and how food functions as fuel. Though it hadn’t been her plan to practice nutrition, Holmes ultimately realized that juice was a powerful way to reach consumers, including those in need of nutritional healing. 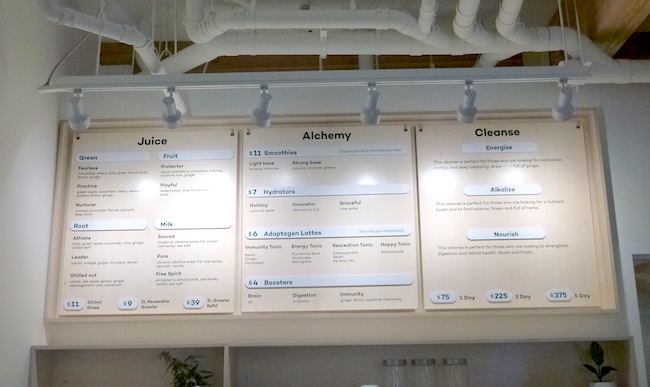 The menu board (Lindsay William-Ross/Vancity Buzz)

“Juice is the gateway drug to healthy living,” explains Holmes. Though Nectar does sell cleanses, Holmes says that it can be enough for a customer to simply add one green juice into their routine in order to find improved health benefits–it doesn’t have to be everything.

Holmes witnesses the power of the small change of green juice when Nectar got off the ground with juice-on-tap installed at several area companies. She, and her knowledgable staff, can explain how juice works in the body, or ways for customers to make small changes or explore nutritional supplements. “How do you feel today?” is what the staff will ask customers, followed by “How do you want to feel?”

Having a storefront is an ideal way for Holmes and Kozan to connect with the community and fill a gap in a neighbourhood that is slowly acquiring retailers and amenities to fully serve local residents and workers. 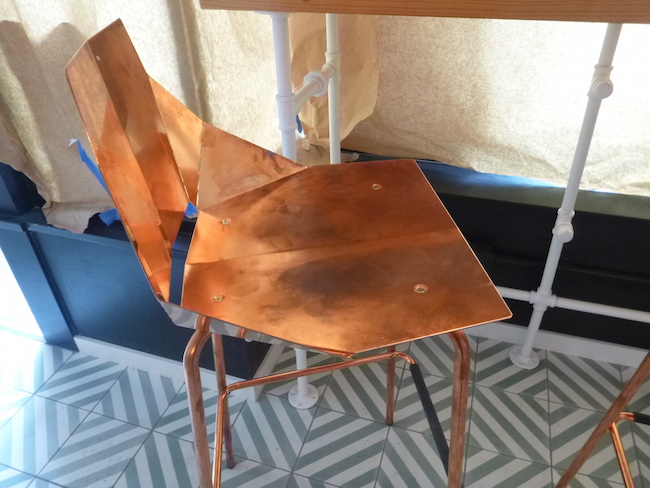 There was a tremendous amount of attention to detail in the design of the Nectar location. “We wanted to create a space where you wouldn’t know why you felt good being in here–you just did,” notes Holmes. Copper stools at a small counter at the street-facing window, while more copper piping is part of the custom-designed lighting. Hand-painted Moroccan tiles, potted plants, and cream-coloured walls are part of an overall soothing vibe as orchestrated by designer Kelly Deck.

Holmes calls the style of the Nectar shop “Scandifornia,” explaining that it’s as if “Scandinavia and California had a baby, and that baby was juice.” 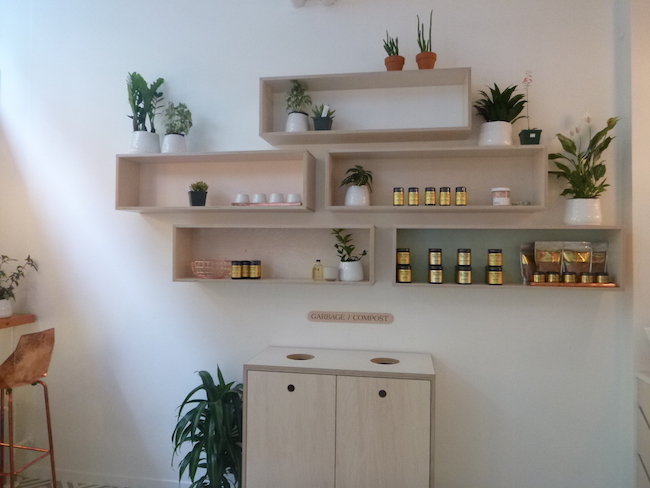 But it’s not just juice on the menu. Nectar offers smoothies made with cold pressed juice bases with ground fresh organic almonds, and either avocado or banana–no water, ice, or yogurt. Additionally, Nectar is blazing the trail in juice shop offerings with their Adaptogen Lattes; warm drinks made with their house-made nut milks and adaptogens, which are non-toxic herbs that have broad health benefits.  The shop will have juice on tap, as well as sell custom-designed self-cooling terra cotta growlers for customers to bring in for refills.

With Nectar’s permanent shop, Holmes is excited to have a place where customers can come in and get information about nutrition, juicing, or ways to make small–but meaningful–health-focused shifts in daily life.

“In anything I’ve done I just have a passion for living at the edge of my capacity,” says Holmes. Nectar’s brick-and-mortar shop is a rare chance for Holmes to curb a lifetime of nomadic living, and to make the knowledge she’s gained and the juices she’s created be accessible to Vancouverites. 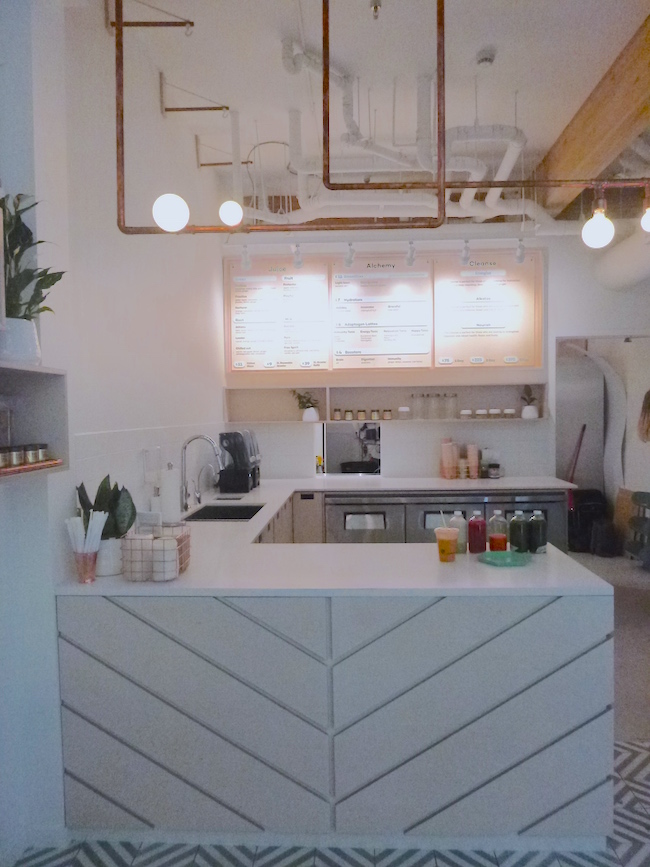