Two young Irish men died last week after carrying out “neck nominations”: a 22-year-old allegedly after consuming a pint of spirits, and a 19-year-old who died after jumping into a river during a “neknomination” stunt on February 1.

‘Neknominate,’ or ‘Neck & Nominate’ as it’s more commonly known, is thought to have originated among students in Australia or the UK. While the #neknominate first started trending in January 2013, it has gained momentum this year and is spreading across North America thanks to its virality on social media.

The aim of the “game” is to complete a drinking dare by necking a pint, and then nominating two others to out-dare you within 24 hours. Inevitably, given the heady mix of alcohol and competition involved, each new video posted online is becoming more extreme for the entertainment of the masses.

Those who refuse to participate also open themselves up to cyberbullying. As it’s crudely described on Facebook: “Don’t break the chain, don’t be a d***. The social drinking game for social media! #neknominate. Drink Responsible”.

Thousands of videos are flooding YouTube daily, if not hourly, as nominations go global. One video posted on Facebook is said to show a man downing a can of lager before biting the head off a dead chicken. He is then said to fill a pint glass with vodka, three raw eggs and a cigarette he has stubbed out on his tongue.

In another, a drinker reportedly fills half a pint glass with urine and beer, which he gives to a friend who tries to drink it.

The most infamous of the moment include a man who is dangled by his legs, drinking beer from a toilet, and another who is punched and beaten with sticks as he skulls beers and shots, only to have firecrackers thrown at him and his pants set alight.

Hair-raising videos have emerged of drinkers on motorbikes and skateboards, jumping from bridges and even two men dangling precariously from a helicopter over a lake in a park in Queensland, Australia. This elaborate nomination opens with two young men driving in a Ferrari as they explain they’ve been nominated, then each ‘necking’ bottles of beer as they cling to the skis of a chopper hovering several metres above a dam. The men are not wearing harnesses and only one is wearing a helmet, with a camera attached to it. The Civil Aviation Safety Authority is said to be questioning the pilot involved. 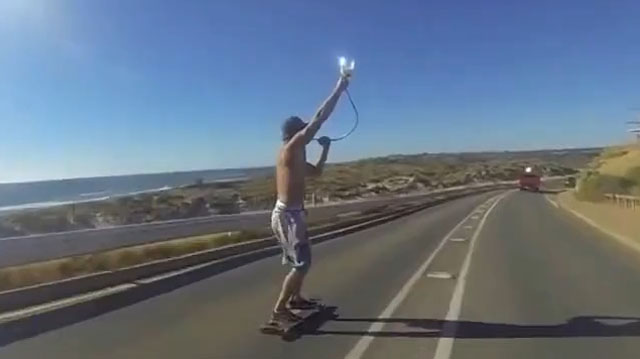 Police in Australia have also questioned a 21-year-old man after a video showed him getting out of the trunk of a car, necking a drink and then climbing back in. Another trend concerning authorities is ‘skidnominate’, which is a dangerous escalation of the drinking game where participants film themselves doing burnouts and skids in their cars.

Health authorities worldwide are warning the public about the dangers of drinking games and the particular chain nature of Neknominate, which encourages underage drinking, driving under the influence and the risk of alcohol poisoning.

They advise people not to give into peer pressure by feeling obliged to carry out a nomination. Aside from the health implications, there’s the long-term consequences of these episodes appearing anywhere online in searches by prospective universities or employers.

Vancouver Coastal Health’s alcohol and drug educator for youth, Kerrie Watt, has warned university students in B.C., who have begun posting their video nominations online, that the game is incredibly dangerous and participants are putting their lives at risk.

“Alcohol actually depresses the part of your brain that controls breathing as well as heart rate. Once you stop breathing, your heart will only beat for so long,” Watt said to BCIT’s Rhianna Schmunk.

Unfortunately, people putting themselves in danger for our amusement is not a new concept. The Jackass guys have been trying to one-up each other in the stupidity stakes for years, and social media dares like last year’s “cinnamon challenge” have led to hospitalizations and a surge in calls to U.S. poison centres.

That fad involves daring someone to swallow a spoonful of ground cinnamon in 60 seconds without water. Because the spice is caustic, trying to gulp it down can cause choking, throat irritation, breathing trouble, nosebleeds and even collapsed lungs. cinnamonchallenge.com claims that more than 40,000 videos have been posted on YouTube, with one video in particular garnering more than 29 million views.

The cinnamon dare has been around for over a decade, but its popularity took off about five years ago, around the time of the rise in social media. Google recorded 2.4 million hits for the topic in 2012, up from 200,000 in 2009. Facebook page Neknominate has already attracted nearly 20,000 likes since its launch on January 5.

Thankfully, in a positive turn of events and given the mixed reaction to the trend, a number of videos have been posted online with nominees refusing to participate and urging others to do the same in order to put a stop to the chain game. Other videos show nominees “necking” coffee, tea or milk, telling viewers; “don’t be fools and get your vitamin C instead!”

A South African man’s answer to his neck nomination has gone viral in its own right as he appeals to people to use it to do good instead and pay it forward. Brent Lindeque’s informative video shows him helping those in need and nominating others to do the same, saying; “I’ve decided to create something positive out of the random global phenomena of NekNominations…imagine if we all harnessed the power of social media to make a real difference in people’s lives.” Using the hashtag #OnlyGoodThings, the video has had over 300,000 views since January 31.