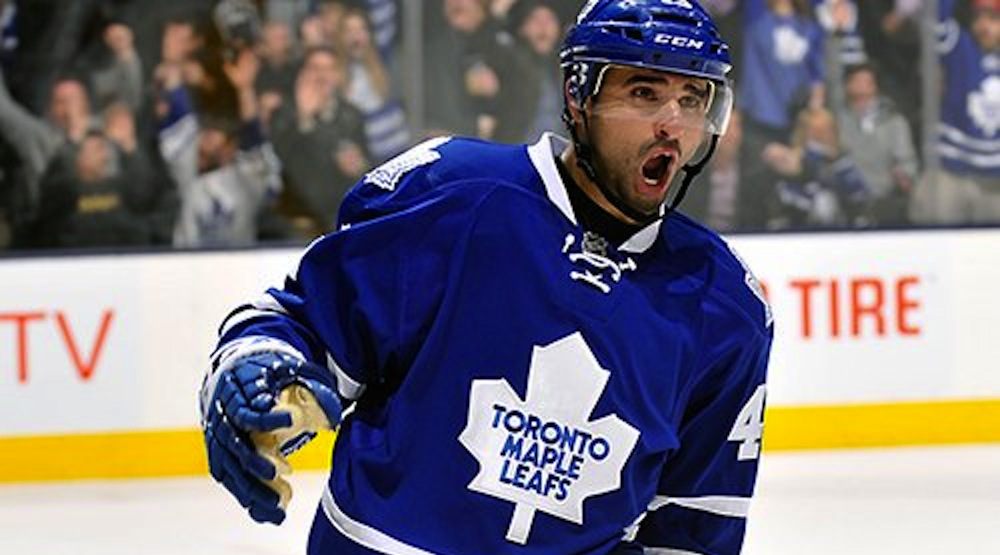 Or at the very least, did an ***hole thing Saturday night.

For those who haven’t seen the hit, or haven’t heard about it, Kadri took a run at Daniel Sedin during the Canucks/Leafs tilt game:

It’s a gross hit, no matter which team you support. It’s the kind of hit Scott Stevens once delivered and we all cheered, but then when we found out about concussions, we realized “oh ok, we should probably stop doing that, bruising our brain isn’t as fun as we once thought it was.”

(And I say that as someone who cheered the ever loving hell out of Stevens obliterating Eric Lindros, before I learned the after effects of head shots.)

Kadri lined up Daniel, and followed through on a hit that looks very much like a direct shot to the head.

Some people are Zapruder filming it up and trying to claim it glanced off the shoulder first (back, and to the left. Back. And to the left), but that hasn’t stopped the NHL from suspending a player in the past for not technically aiming at the head.

Remember Raffi Torres on Jarret Stoll? Even though the shoulder was hit first, it was deemed a “glancing blow” in the overall end product being “ending Jarett Stoll as a person.” And even watching that Torres hit on Stoll, it still looks better than the one Kadri threw Saturday.

And all of that shoulder talk assumes Kadri is an innocent little choir boy who made a small mistake while trying to throw a hit. Like he got caught up with the wrong crowd and did just one tiny small little infraction. The ol’ “Concussion Boys” down on Yonge street, boy were they ever bad news, it’s just a shame lil’ Kadri fell in with them!

Unfortunately for that theory, Kadri is a three-time offender. He has, in the past, been suspended three separate times for illegal actions. Twice for throwing a bad hit, once for a cross check.

So while Canucks Nation waits to see if someone actually gets suspended for hitting one of their players, let’s all agree on one thing:

It’s ok to admit players on your favorite team can be dicks.

Seriously, it’s ok. Go ahead. You’ll feel better after you do.

Remember Raffi Torres on the Canucks? He did some pretty shitty things. He scored some timely goals. He had a lot of energy, He threw some big hits. He had some of the most intense goal celebrations around. He was easy to cheer.

(Trigger warning: 2011 highlight incoming. Just pretend it was a five game series. Breathe. Breathe. We can get through this.)

But he also threw dangerous hits. And illegal hits. And he was rightfully suspended for being a player that crossed the line. See how easy it is to admit something like that?

Look, I get it, sometimes players have to play with an edge to be effective, or to keep their job in the NHL. That was one of Torres’ reasons for his hits, that his value would drop significantly if he didn’t throw huge hits.

It’s just when you do bad things, you get labelled a bad person. You earn your title. This is how the world works. If you fart in an elevator every day at work and people start calling you the “Crop Duster”, you can’t just wave that away and go “Well hey, Bill in accounting eats people’s lunches out of the work fridge!” That doesn’t change anything about what you did.

So when Kadri throws a brutal hit, it’s frustrating to see Leafs fans react with “Well, Burrows is on your team. You reap what you sow.” Or “You had Kesler on your team, it’s karma, lololol” or whatever other variety of “he did this, ok, but that guy did this.” You can’t discount any bad thing your team does to the Canucks just because Burrows once bit a dude’s finger.

You don’t have to stop cheering Kadri. You could own his jersey and love how he plays with an edge, and maybe you’re the guy on YouTube telling people hockey isn’t ballet.

But at least be honest about the fact that Kadri does some really shitty things sometimes, and did a shitty thing to Daniel Sedin. It’s ok to let people vent and rage about something Kadri did that people felt was bad. You don’t need to rationalize it with weird “past digressions karma math.”

As David Puddy once said “You gotta support the team!” and that’s fine. But you can also be honest enough to admit when your players crossed the line.