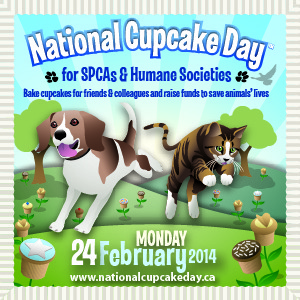 The SPCA and Humane Societies across Canada cooked up the first-ever coordinated Canadian event to raise funds for the protection, care and advocacy for animals in need. Even though it’s new to Canada, it has a long, successful history in other countries around the world; namely in Australia, New Zealand and the UK. The first annual National Cupcake Day™ in 2013 was a huge success, raising close to $400,000 nationwide.

This year, the BC SPCA is encouraging Vancouverites to raise funds to support dogs, cats, guinea pigs, horses and all other animals in need by hosting an old-fashioned cupcake bake sale and tracking donations through www.nationalcupcakeday.org’s Online Bakery.

If you’re not a baker or you just don’t have time to whip up some ‘pupcakes’, you can still support the cause by buying cupcakes from a number of participating Vancouver shops and restaurants to show your love.

Below you’ll find a few local spots where you can grab a delicious cupcake and donate to a worthwhile cause.

“Events like Cupcake Day are so important to the BC SPCA,” said BC SPCA General Manager, Community Relations, Lorie Chortyk. “We rescue and care for more than 25,000 injured, abused, neglected and homeless animals every year and we rely almost entirely on community donations to fund our services and programs for the province’s most vulnerable animals.”

“It costs millions of dollars each year to provide life-saving care for so many animals who have been abused and abandoned, and we are extremely grateful to the individuals and groups who have joined us through National Cupcake Day to create safer and more humane communities for animals.”

Given several high-profile cases of animal cruelty in recent years across the country, the BC SPCA hopes the national event will focus attention on the plight of abused animals and the need to work tirelessly to end animal cruelty.

“Our BC SPCA constables responded to more than 7,000 complaints of animal cruelty last year,” Lorie added, “which is a shocking number. We look forward to a day when all animals will be treated with compassion and respect.”

This is the first year Langley Animal Protection Society has also taken part.

Tune in to Virgin Radio 95.3, who will host a cupcake sale at the Safeway at King Edward and Oak until 6:00 p.m. Team Nat and Team Drew will compete in the Virgin Radio BC SPCA Cupcake Day fundraising showdown, so be sure to bring pockets of loose change and cash!

Lovers of sweet and citrusy flavours can grab a special cupcake at Bel Cafe today, with 20% of proceeds going to the BCS PCA. The Bel Cafe cupcakes feature a delicate vanilla chiffon, citrus creme, buttercream and punchy, edible yellow decor for $4.50.

Fresh St. Farms and Fresh St. Market are donating 50 cents from every cupcake sold from February 21-24 or $1.50 from each half dozen.

Luv Cravings: Net proceeds ($5) from the sale of a special National Cupcake Day cupcake will be donated to the BC SPCA.

Fairy Cakes: All day today, 50% of cupcake sales will be donated to the BC SPCA.

In Vancouver and Port Moody, 3 Dog Bakery is donating all proceeds from the sale of large pupcakes today.

Got a friend with a pooch, but not a sweet tooth? Buy them a nail trip from Cambie Street’s The Pet Shop Boys. All proceeds from nail trims are donated to the BC SPCA until the end of the month.

HOW YOUR CUPCAKES CAN CHANGE LIVES:

$100       subsidises medical treatment for an injured dog or cat

*services may vary from province to province

Let’s make this the sweetest time of the year!