A huge leaf for mankind was taken today as the International Space Station (ISS) added something new to their menu.

NASA astronauts on board Expedition 44 ate vegetables that were grown in space for the first time. Scott Kelly, NASA astronaut who is doing one year of research in the ISS confirmed that it indeed “tastes good,” and in fact, “Kind of like arugula.”

As part of NASA’s plant experiment dubbed Veg-01, red-leaf lettuce was grown and harvested in little “pillows.” The first set of pillows was grown and studied by Expedition 39 in May 2014. Though was then brought back to earth after 33 days of growth to undergo analysis.

“That was harvested and brought down on Space X to get it analyzed for microbials and any kind of impurities,” said Paul Zamprelli of Orbitec, the company that developed the veggie system in a video uploaded by NASA. “The good news is that it is edible.”

On Monday morning, the astronauts on board took their first bite of the space-grown vegetable.

We all remember learning about space food back in elementary school, whether it was the tasteless paste squeezed out of a tube or the tightly packaged meals designed to stay contained in a microgravity state.

Zamprelli said that this is a huge step for mankind as food is needed to grow in space in order to travel longer distances. Along with red-leaf lettuce, the first flight NASA sent up also included flowers.

“One of the things with flowers, let me point out, is that they’re going to see how these flowers pollinate in a zero gravity state, which is very important as well, because pollination for fruit and future things really need to happen,” he said.

NASA hopes to increase the amount of crops in the future, and will be experimenting with growing more food in microgravity. 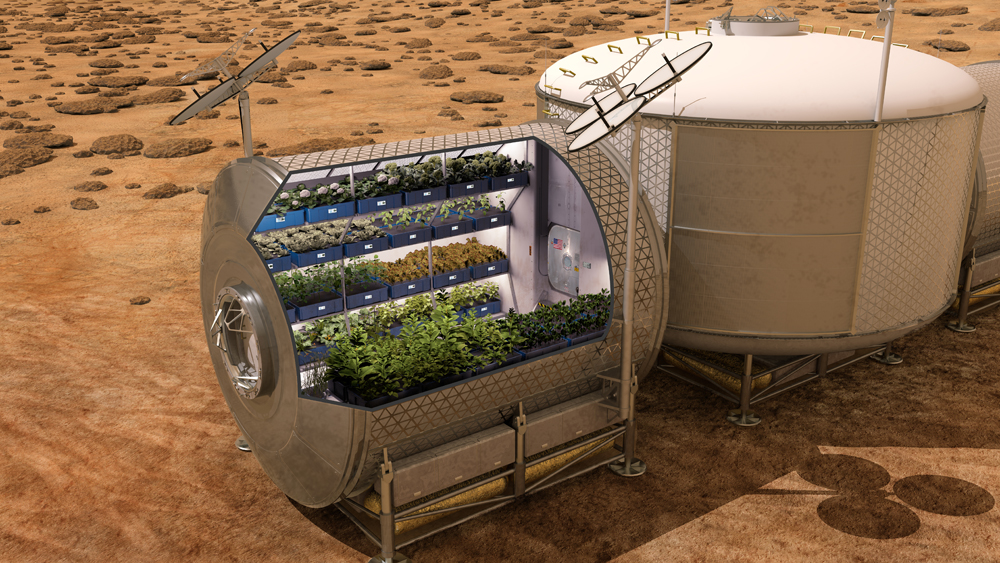 Image: Rendering of what NASA wishes its Veggie system to grow into / NASA