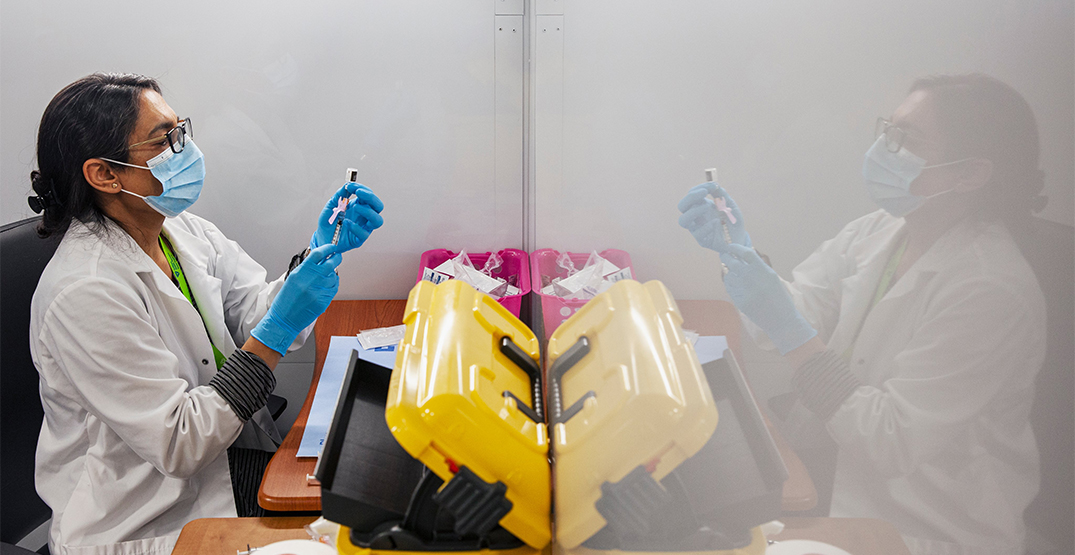 A health worker in Mississauga prepares a dose of COVID-19 vaccine. (@THP_hospital/Twitter)

Canadians who received a first dose of the AstraZeneca COVID-19 vaccine can get a second dose of an mRNA vaccine, health officials announced Tuesday.

The National Advisory Council on Immunization (NACI) updated its guidelines to say people who got AstraZeneca first can either receive a second AstraZeneca shot or switch to Pfizer or Moderna for their second dose.

“Interchangeability of vaccines means you can receive one vaccine product for your first dose and receive a different dose to complete your two-dose series for optimal protection from COVID-19,” Theresa Tam, Canada’s Chief Public Health Officer, said at a news conference Thursday.

Tam referred to a Spanish study which found that mixing viral vector and mRNA vaccines was effective.

“If you measure antibody response in someone who got AstraZeneca and then had a second dose as Pfizer, they mounted a really robust immune response,” Tam said.

The research suggested there was a possibility of increased short-term side effects such as headache and fatigue when using a mixed vaccine schedule.

Although the clot risk from a second dose of AstraZeneca is significantly less, Tam encouraged people to weigh the risks and benefits and look at the incidence of COVID-19 in their area when deciding what vaccine to choose for their second dose.

NACI also updated its advice to say individuals can receive a different mRNA vaccine for a second dose if the one they got first is not readily available.

“Try and use the same vaccine,” she said. “But if you can’t find it, or if you don’t know what someone had … then another mRNA vaccine can be considered.

NACI still recommends that provinces should maximize the number of people getting a first dose, but now that more vaccine supply is available in Canada it said jurisdictions should begin giving second doses to those at highest risk of severe illness and death.