On Friday January 24th a sold out Celebrities Nightclub was jam-packed for dynamic duo Myon and Shane54, best known for their impeccable mashup productions and uncanny vocal tracks.

The duo recently finished their massive collaboration with Late Night Alumni, and seemed like the perfect time to start their “Heartbeat” North American Tour. Along with the Hungarian boys, pop-synth house group Late Night Alumini, consisting of vocalist Becky Jean Williams and John Hancock on the instrumentals, performed a fun one hour show before Myon and Shane took stage. 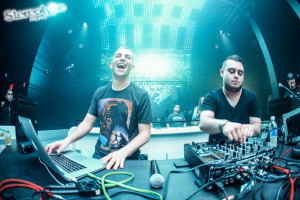 Late Night Alumni started the show with an hour of beautiful vocals. Although Becky Jean Williams’ vocals sounded too soft during the first few tracks, the singer picked up the pace and her fragile voice soon echoed loudly throughout the club. Tracks like “Empty Streets”, and “You Can Be The One” were among fan-favorites, which had the crowd singing and swaying along with the eclectic singer, while Hancock very professionally handled the keyboards and bass guitar as Becky Jean Williams sang on. Aside from their own music, Late Alumni also performed their latest collaborations with Myon and Shane54, titled “Every Breath is Like a Heartbeat”, and “Under Your Cloud”. 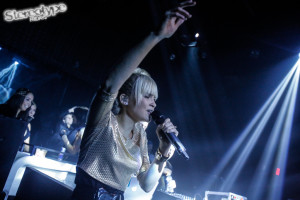 Myon & Shane54 followed with a two hour set with the best from trance, progressive house, and electro house. The mix of genres definitely created good vibes for the crowd and even had everyone singing loudly to all vocal tracks. The duo’s limitless energy kept the audience locked on the dancefloor throughout the whole night while the boys spun only the best-of-the-best in their mashups and original mixes.

The tracklist from Myon & Shane 54’s set was as diverse as this city itself.

They started their set with a celebratory bang, spinning their latest remix of Daft Punk’s “One More Time”, followed by another one of their “Summer of Love” remixes of Lana Del Rey’s “Young And Beautiful”. Among the favorites included their newest track “Hurricane” ft. Amy Pearson, and their massive collaboration with Seven Lions titled “Strangers ft. Tove Lo”, which effortlessly created havoc amongst the audience.

Every time these Hungarian boys step in Vancouver, they leave the dancefloor with a deep impression of their energetic demeanor and tasteful musical sets. This time was no different, and with Late Night Alumni alongside their DJ sets, the night was a spectacular display of electronic music favourites which satisfied ever fan at each corner of the club.