The countdown to FVDED in the Park has officially begun.

In just a few weeks time one of the largest local music festivals is back, and bringing with it a stacked line-up of international artists. Along with headliners Jack U and Zedd, the two day concert is proving to have one of the best artists roster this summer.

While we’re stoked on the entire line-up, here are 7 artists you should definitely catch at this year’s FVDED in the Park.

Day 1
[youtube id=”d7cVLE4SaN0″]
Probably the hottest artist this summer, Bryson Tiller finally makes his debut appearance at FVDED. The young rapper blends his R&B with trap, creating his sound and his appropriately named debut album Trapsoul. DON’T miss his set. (See what I did there?)

Day 1
[youtube id=”C6McIu7kfZU”]
Toronto’s flower child rapper is back. From Squamish Music Festival (RIP) to the stage at Fortune Sound Club, Jazz’s live performance keep getting better and more energetic- if that is even possible. And with the recent release of Hotel Paranoia, Jazz’s set is bound to be filled with new tracks, jumping, and intense crowd-walking.

Day 2
[youtube id=”yaWesK-nWts”]
From Toronto to Montreal, and one of its largest exports today, Kaytranada. After opening for a couple of Rebel Heart Tour dates with Madonna last year (including Vancouver’s show), Kaytranada released his debut album in May. The incredible album features a ton of collaborations, including with one GoldLink – who is also at FVDED.

Day 1
[youtube id=”NrQFhNxPnPc”]
Hometown fave Ekali is back, and on a bigger stage yet again. Slowly taking over international club stages, our very own Nathan Shaw (aka Ekali) is known to keep the dance floors lit. Head to the show early to catch Ekali’s set, and get the party started with this Vancouverite.

Day 2
[youtube id=”8ENpRYyoQ1M”]
If you think you’re unfamiliar with Metro Boomin, chances are you’ve heard one of his tracks. The young producer has been collaborating with names like Future, ILoveMakonnen (that Tuesday song, it’s his production), and our beloved Drake (“Jumpman”). These being his tracks, expect a healthy dose of hiphop and beats during Metro’s not-to-be-missed set.

Day 2
[youtube id=”AYbP-fkiJ0o”]
Dance party switch on! These boys say it best when they say “Peking Duk not only tastes good, but it sounds even better.” Aussie producers/funny duo Peking Duk return, and electronic music fans heading to FVDED should get excited. Peking Duk’s extreme high energy show is bound to be a highlight of your weekend.

Day 1
[youtube id=”0z9ib5yLSdQ”]
DJ Mustard’s production is all about the melodic hybridity of hip-hop and dance. Known for his work with Young Jeezy, Big Sean, Ty Dolla Sign, and Kid Ink, DJ Mustard is a guaranteed festival floor hit. Just check out his latest track with Travis Scott, and watch for those drops. 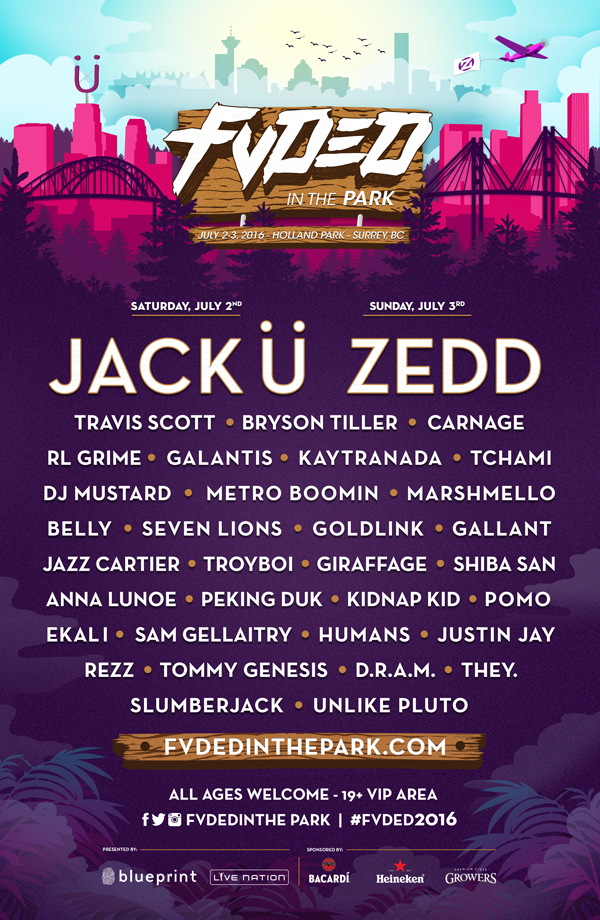