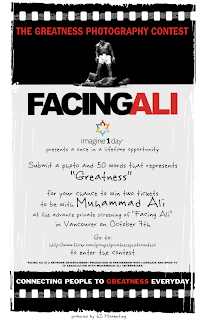 UPDATE: Muhammad Ali can’t make it thus the contest has been canceled. Apologies to those who have entered.


On October 7th, Vancouver will welcome the greatest, none other than Muhammad Ali.  It’s been a long time since he’s been to Canada (30 plus years) and he will be in town for an advanced screening of “Facing Ali”. We have been selected by Imagin1day to alert our readers to The Greatness Photo Contest! Here are the details, this is a once in a lifetime opportunity!

About The Greatness Photo Contest

imagine1day’s vision is to connect people to greatness…and there’s no one greater than Muhammad Ali. imagine1day wants to give YOU a once in a lifetime chance to win 2 tickets, valued at $1,000 to an advance screening of “Facing Ali”; attended by none other than Muhammad Ali and his wife Lonnie Ali in Vancouver on October 7th at 5:30PM. Watch the trailer. The winner will also have the opportunity to join Mr. Ali for a photo.

Submit a photo and 50 words or less that represent GREATNESS for your chance to win.

Adding your photo(s) to The Greatness Photo Contest Flickr group with the tag “greatness photo contest” constitutes entry into the contest. Photos would ideally also be tagged with “Muhammad Ali” and “imagine1day”

Photo license settings on Flickr must be set to “Attribution Creative Commons.” Attribution definition: “You let others copy, distribute, display, and perform your copyrighted work – and derivative
works based upon it – but only if they give you credit.”

You are allowed to upload a maximum of 2 to the contest so be selective on which photos you add. We want to see your best photographic representation of greatness, not all of them.

Proceeds from this event will support the Muhammad Ali Center and Vancouver’s own imagine1day.

In order to be eligible to win the contest, you must reside within Canada for the duration of the contest and be over the age of 18 at the commencement of the contest.
Thanks to Jered over at Imagine 1 day for letting us know and giving our readers a chance to see the greatest boxer ever in person.
VancityBuzz.com