Disney has been making animated films for around 80 years, and more often-than-not they strike gold. Zootopia is one of the winners, and I have no problems saying that the film is the very first Oscar contender of 2016.

Now before I get too carried away with the hyperbole, I know we just had the Academy Awards and we’re only in March, but count Zootopia as the early…okay, very early favorite for Best Animated Feature. 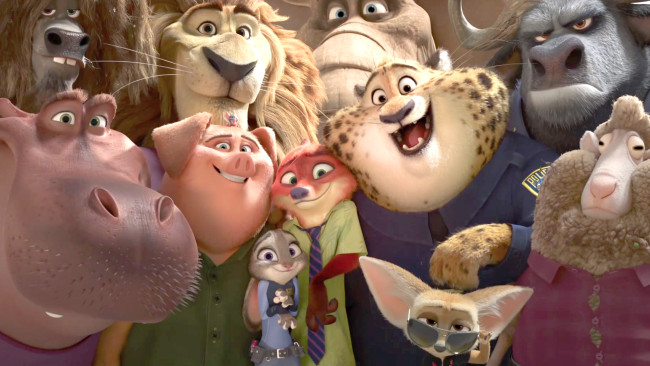 When we’re so used to getting a plethora of princesses and superheroes shoved down our throats, it’s nice to come across an animated film that has some originality to it.

It’s also refreshing to see smart stories being created for kids. Last year we had Pixar’s award-winning Inside Out, and this year we have Disney’s Zootopia. It just feels like we’re entering a golden age of animated masterpieces.

Directors, and I mean more than two, Byron Howard, Rich Moore, and Jared Bush are three very talented men who are individually responsible for other great Disney films like Tangled, Wreck-It Ralph, and Big Hero Six to name a few. To have all three working together on a project is probably why Zootopia got the love and care it deserved. 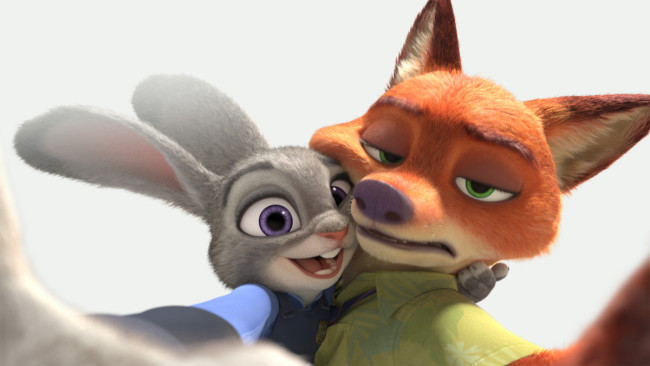 This film has a fantastic cast of voices with the likes of Ginnifer Goodwin, Jason Bateman, Idris Elba, Bonnie Hunt, Tommy Chong, J.K. Simmons and more. Oh I forgot Peter Mansbridge from CBC’s The National, and Shakira sings a song that will stay stuck in your head for days, maybe even weeks.

The story centres around a cute little bunny named Judy Hopps (Ginnifer Goodwin) who lives in the small town of Bunnyburrow. From a young age Judy wants to become a cop. Everyone, including her parents, tell Judy that she’s too small and too delusional to become a police officer. Ouch.

Determined to prove everyone wrong, Judy graduates at the top of her class at the Zootopia Police Academy and becomes the first bunny to be accepted into the Zootopia Police Department, or ZPD as they call it. She moves to the bustling metropolis and is surprised to see animals of every species living together in harmony. 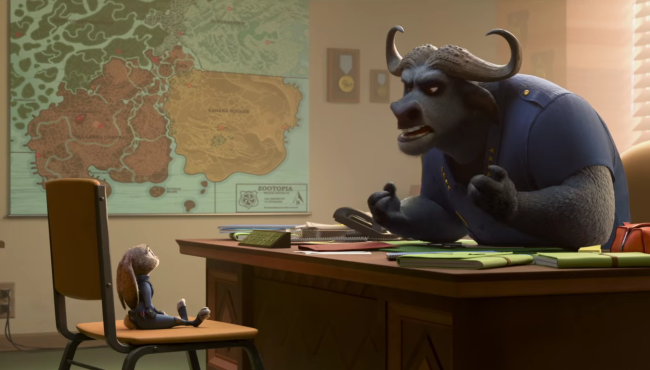 The introduction to police life isn’t living up to expectations as police chief Bogo (Idris Elba) relegates Judy to parking duty on the first day of work. As she takes on the role of meter maid, parking violations just don’t fill the void of wanting to catch criminals and keeping the streets safe. When Mrs. Otterton (Octavia Spencer) comes into the precinct begging the force to find her missing husband, Judy volunteers for the job, much to the chagrin of Chief Bogo.

This sets Judy on a dangerous path where she meets new friends including a con-artist fox named Nick Wilde (Jason Bateman) who ends up helping her navigate the seedy underworld of Zooptopia. Together they try to solve a crime and learn an important lesson while doing so.

What we end up getting is a Disney’fied buddy cop film. But the story isn’t just about Judy and Nick’s investigation; in fact that’s just a small part of it. 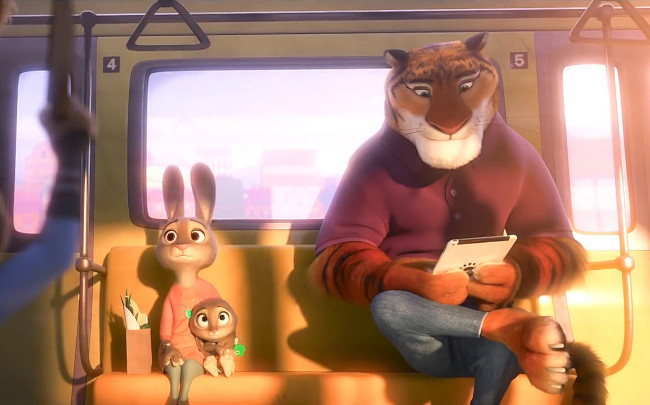 Prey animals make up 90% of Zootopia’s population and they’ve been living in harmony with predators for eons. That’s until something evil and sinister happens that scares the general population into believing that all predators should now be feared, giving the story a deeper-than-anticipated social context.

Despite the heaviness, this film is boat loads of fun, not only for kids, but for parents too. Disney tackles a very sensitive issue of what happens when different people and cultures find themselves living together, but are segregated when prejudice rears its ugly head. It’s not always peaceful nor pretty. Fear becomes the underlining problem where even best intentions unknowingly causes a rift between animals. It’s essentially a giant mirror that reflects on the world we know today.

However, Zootopia’s message isn’t heavy-handed or preachy. Instead the lesson is subtle, delivered through the inherent humour of the film. .

Cinematic Factoid: Nick Wilde’s fox design is heavily based on Disney’s Robin Hood (1973) (which is also a fox) from the film with the same name. – IMDB

Everything about this film is beautiful. The animation is top-shelf and every detail including each strand of bunny hair is gorgeous.

The comedic timing is perfect, and having one of the leads voiced by someone with the dry wit and charm that Jason Bateman oozes is why this film works. The voice actors are each perfectly cast with their spirit animal. They all bring something to the story and their individual characters. With so many great actors involved things could have gotten very convoluted, but instead everyone adds something special to the ensemble.

Smaller kids might find some scenes a bit scary, but older kids, 5 and up, will enjoy the silliness and the action. Parents you’ll get a kick out of the humour, pop culture references, and the overall lesson that’s even easy for a six-year-old to understand.

I’m giving Zootopia 5 raindrops out of 5.

The film is rated G and opens March 4th at a theatre near you.