Local directors Joel Ashton McCarthy and Bryant “Spry Bry” Boesen started filming a documentary a couple of years ago called Taking My Parents to Burning Man. After a successful film festival run, the “black-rock-umentary” is finally ready to be released to the masses.

If you don’t know, it’s just a little annual get together on the Black Rock Desert in northern Nevada. A few people gather around and do arts and crafts in the sunshine. Some stuff gets burnt. It’s a swell time.

As Bry so charismatically mentions in the film, it’s hard to explain what it’s all about to someone who has never gone, especially if it’s your nearly retired parents. If you’re unaware of this event, have a look at the Burning Man website. It doesn’t look very fun and it’s probably not for you.

For those of you who are familiar with festival, would you ever take your parents? 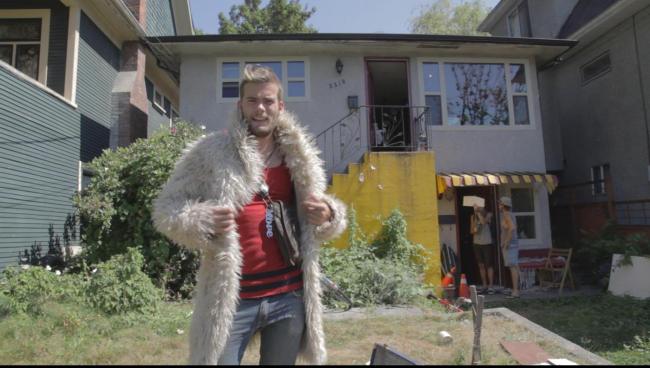 Bryant “Spry Bry” Boesen decided to take his parents Charles (Chuck) and Lilice (Li) Boesen to the hot desert for a week of extreme heat, wind, people, and debauchery all in the name of documenting the experience on film. Bry’s sister Mari also made pilgrimage from Alberta and it became a full family affair. It’s all the things you wish your family vacations were.

After watching the crowd funded doc, you realize that had it not been for the other filmmaker Joel Ashton McCarthy and crew, I would not be writing about this fantastic documentary.

Right from the beginning of the story we are introduced to Spry Bry, who lives life as a DJ, filmmaker and artist. As creative and cool as this dude is, living on the life motto of “whatever the Universe provides” will probably not get a film done; so thank goodness he had a great team of people around him. 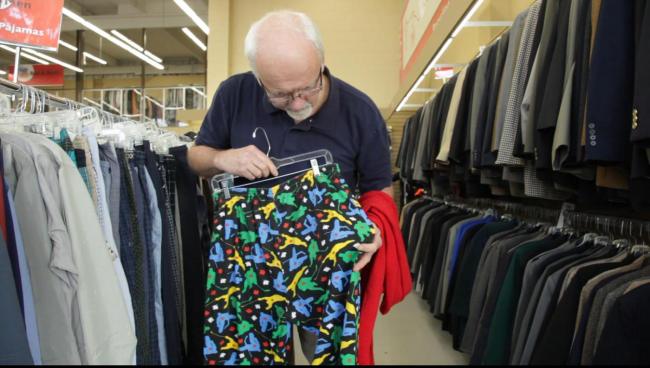 From the start, you get to know the Boesen family, and I can’t say enough how lovely these people are. You take a liking to them right away, especially with how open Chuck and Li were to the idea of being taken out of their normal suburban life to follow their son to something as crazy as camping in the desert surrounded by freaks and fire.

A series of unfortunate events is how this doc begins, but that only adds to the drama and intrigue. As Bry predicted, the Universe provided and the long journey began. Key word… long.

Joel, Bry, and the parents were able to make the trek to the sacred playa in a green school bus that used to belong to a female baseball team called the Dirty Mitts.

The Boesen family and film crew jumped aboard that space ship with a few other party people from Vancouver, who were also making the journey, and from that point on both Chuck and Li got a big heaping dose of culture shock. 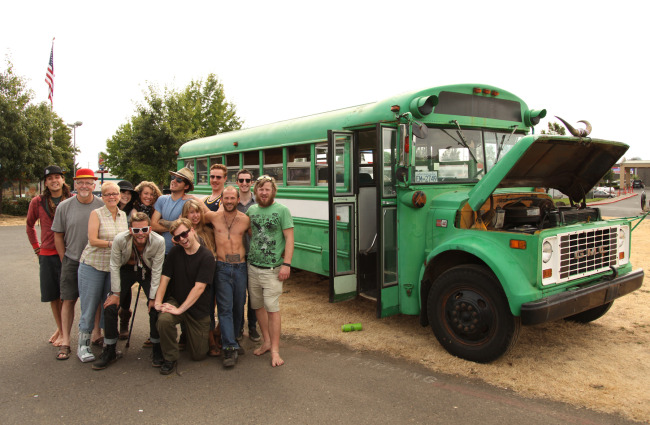 After being 24 hours behind schedule, Chuck, who is like so many other dads who have a hard time functioning outside of a well organized plan, comes to realize quickly that none of that matters anymore.

Chuck has one of the best lines of the film when he has an epiphany and says, “As long as I realize that we don’t have a schedule, you can’t be behind. So I’d say so far, with the new plan, we have no schedule. That way we are right on target.”

Right on target was this story from that point on. There was no turning back. They loaded the Dirty Mitts bus with groceries and made their way to Black Rock City. 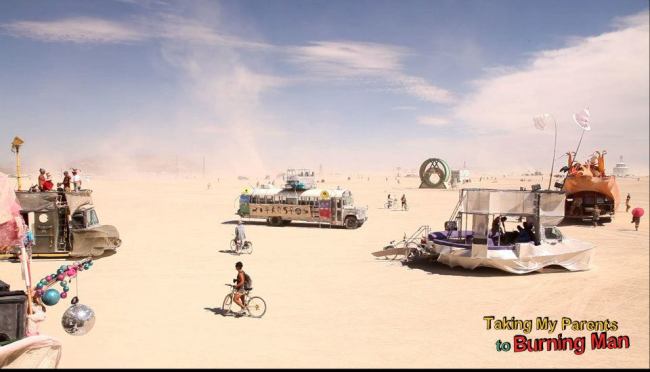 As soon as they finally arrived at their destination, you are instantly transported and engrossed into the enormity of what the Burning Man culture is. With wide eyes and a few “holy shits, look at that!” the parents got an experience that was only going to change them forever.

Through fantastic cinematography, the film shows you the art, the engineering and the ideas that makes Burning Man so special. As soon as the sun goes down the place becomes alive.

As crazy as some of the people seem, and no matter how nuts the parties get, Burning Man is portrayed in this doc in it’s truest and purest form. It’s shown as a one-of-a-kind community full of wonderful human beings who just want to share, love, connect, and experience something that’s hard to find in the regular daily grind of life. 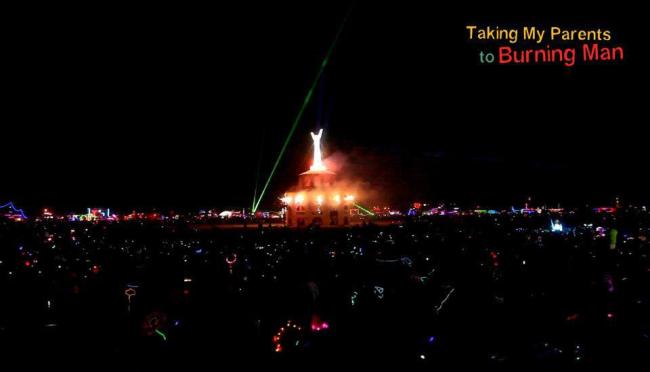 That’s what so lovely about this project in that we get to see a family come together in a very diverse and at times uncomfortable setting. You witness this family, who clearly have their shit together, form an even closer bond that is beautiful to watch. That’s what you want a documentary to do. You want the audience to feel and experience a small piece of those emotions.

Joel and Bryant also turned the cameras onto some of the characters in their playa community, including the Tuna Guys, who are fishermen who treat their tuna like manna from heaven as they feed the hungry and malnutritioned burners.

These fishermen, who believe “what the playa takes out of you, the tuna puts back in,” supply over 1500 lobs of freshly caught albacore tuna. They are not wealthy people but hard working fellas and ladies that fully get what the Burning Man spirit is all about. You smile and get a little misty-eyed when you hear these fine folk talk about why they participate every year and the best friend they honour and remember. 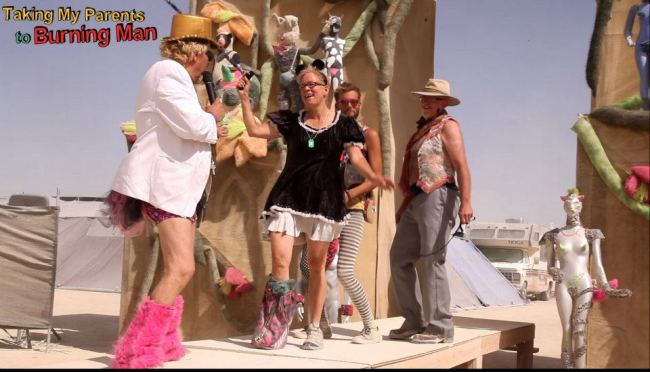 This entire journey that the family goes on is a trip full of heart and wonder. Watching Bry’s father Chuck transform from a guy who wouldn’t be caught dead wearing colourful Thai fisherman pants to putting on a full costume and dancing to his son’s DJ session in the desert is heartwarming. You see how proud and supportive parents can be when they see firsthand what makes their children feel happy and fulfilled.

The documentary perfectly encapsulates what Bry couldn’t do in explaining what the Burning Man is to his parents and to others. It’s a personal journey and we get to be a part of it.

The film provides a first hand look at parents finding or being reintroduced to parts of themselves that maybe they forgot or didn’t know existed. Or as the movie poster says, it’s never too late to come of age again. 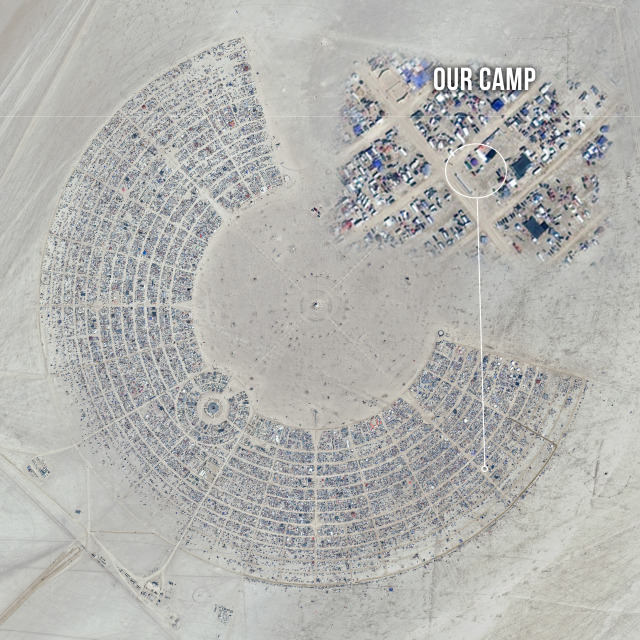 Taking My Parents to the Burning Man gives you a glimpse into what this long running social experiment in the Nevada desert is all about.

It gives you the partial experience by focusing on four people, amongst 65,000, watching a wooden man burn. That little flicker of fire was brought back to Vancouver by the Boesen family and this documentary will share a piece of that with you. 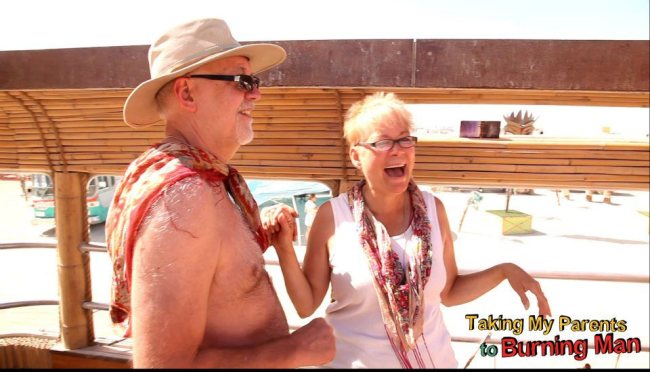 The film is currently doing a run at The Rio Theatre in Vancouver until Tuesday July 14th. Check out the Rio website for showtimes. The film will be available on iTunes and all other major VOD platforms starting July 21st.

This is easily one of my favorite documentaries so far this year and it’s totally worth checking out. I easily give it 3.5 out of 5 raindrops.