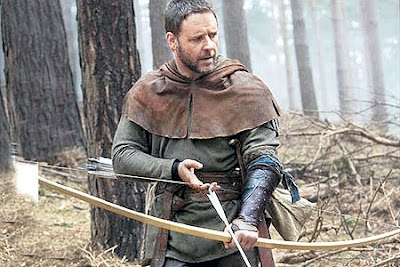 Sick of reading biased, run of the mill movie reviews that are full of over-cooked journalistic crap? Then my 8th grade reading level review is right for you. I’m just a guy that loves movies and tells it the way I see it with no pretension or influence from the studios.
Robin Hood
I so wanted to call this week’s entry “Robin Good” but – sadly – thatʼs not the case. I went into this movie optimistic that I was about to experience a new blend of action and special effects with the unique aesthetic of a period piece. Instead what I got was the same old special effects Iʼve been watching for ten years and Russell Crowe playing Russell Crowe with an Irish accent.
I guess my excitement was brought on by the memories of Ridley Scott and Croweʼs magical partnership on the ahead of its time Gladiator. But am I wrong to want an amped up version of the Robin Hood story with all of the wizardry of today’s special effects? He didn’t even become Robin Hood until the end of the movie! I guess we’re
supposed to wait until the second or third installment to get all the action and heroics. Oh, I forgot that’s how “Hollybusiness” works now.
This tired Robin Hood retread offered only the same old medieval sword and shield battle scenes with the bulls-eye splitting arrow work that was boring and so unoriginal that I thought I was watching some version of cinematic karaoke. I still canʼt understand why a pro like Cate Blanchett would sandbag her way through this snore fest, but I guess a Ridley Scott title does look good on a resume. Obviously this was another case of taking a great story, a great cast, and throwing some crap dialogue together to launch an “epic franchise”
My one word to describe the reason for my disappointment would be “BORING”. The Kevin Costner/Bryan Adams version was 10 times the action with more affecting special effects, and that movie was made almost 20 years ago. If you do go see it, make sure to pack a pillow because the chances of you falling asleep are as assured as the aim of Robin Hood’s arrow.
But hey… what do I know Iʼm just some guy that likes movies.
VancityBuzz.com