I am happy to report that My Little Pony: The Movie is a sheer delight.

Whether you’re a tiny tot or all grown up, the magical prancing ponies’ latest leap onto the big screen contains just the right dose of whimsy and life lessons that it should connect with a wide age range.

The MLP saga began as a hugely successful toy line – predominantly aimed at girls, though its appeal would certainly expand – developed by Hasbro in the early 80s. There was even a poorly received theatrical film release in 1986 that featured the voices of Danny DeVito and Madeline Kahn.

Oh how times have changed. 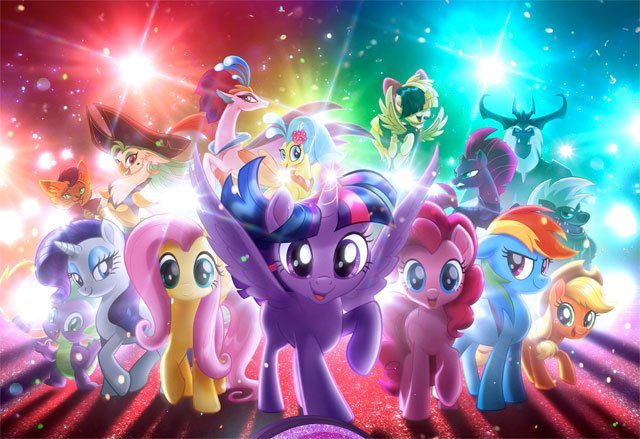 Fast forward to 2017, many iterations later, and the equine gang is finally ready for a movie makeover based on the current TV series. The story is as basic as it gets. A sinister force in the form of the Storm King (voiced by Liev Schreiber) threatens peace in the magic kingdom of Equestria. His second-in-command is a resentful unicorn with a broken horn called Tempest Shadow (Emily Blunt).

The group travels far beyond the borders of their city and meets a wide assortment of creatures, both friendly and potentially dangerous. Though the feature’s plot is simple there is no shortage of colourful eye candy, decent jokes, and rather thoughtful moral examination.

On a visual scale, some of the movie’s sequences are downright dazzling. Crisp animation, with a broad, bright colour palette, and cinematic execution in the directing department ensure immense watchability.

An impressive amount of imagination went into the world-building, thus creating a genuinely intriguing universe with an array of diverse characters including seaponies who were once hippogriffs, pirate parrots that fly around in airships, and a humanoid cat con-artist. The story’s epic road trip backdrop, mixed with effective action scenes, makes for one solid adventure.

The show’s main cast reprise their respective roles with plenty of celebrity vocals peppered throughout. In addition to Schreiber and Blunt these include: Kristin Chenoweth, Michael Peña, Taye Diggs, Orange Is the New Black‘s Uzo Aduba, and Zoe Saldana.

And there are songs too; seven to be precise. While you may not necessarily be humming them on the way home, the jaunty tunes do provide a narrative break and inject some depth. Australian singer-songwriter Sia’s (who also voices Songbird Serenade) original contribution ‘Rainbow’ is admittedly catchy. Even Taye Diggs seems to relish the opportunity for a musical interlude courtesy of his sly feline role as Capper. 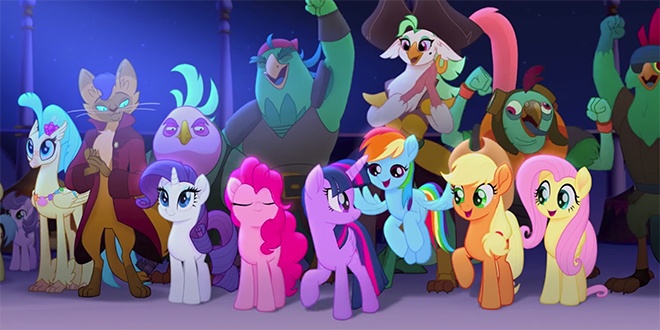 Perhaps the most satisfying aspect of the flick is how emotionally relatable the main characters are. The ponies have magical powers but they also carry flaws and the screenplay is not afraid to address this.

Rainbow Dash’s grandstanding gets the group in trouble, Twilight Sparkle questions her own abilities, and Tempest harbours childhood trauma. Skillfully never preachy, the movie’s subtle use of several lofty themes is admirable and in keeping with the spirit of the show.

If you’re already a fan of the franchise it’s a safe bet you’ll love the whole package presented here. For those who are late to the pony party or have simply brushed it off as mere kids stuff, there might be a sweet surprise or two in store for you. My Little Pony: The Movie earns 3 1/2 out of 5 pieces of popcorn.

Playing at a theatre near you. Rated G and is 99 minutes long.