Financial corruption, greed, and the politics in between can all make for rich thematic material in today’s technological day and age. Cinematic quality, however, isn’t necessarily always a guaranteed bet. That’s certainly true of Money Monster, which at times feels like an attempt at making a standard-issue hostage thriller filtered through The Big Short. But it falls extremely shy of hitting that Oscar-winner’s intellectually stimulating financial bravado, and is quite a far cry away from being a Dog Day Afternoon for a 21st Century audience.

Money Monster does manage to clear the finish line as something slightly better than your average hostage picture thanks to the magnetic performances of its leading lights. A “meh” movie becomes significantly more bearable when you’ve got an effortlessly charming and compulsively watchable star like George Clooney leading the show. If you take away the famous faces, however, you might not consider giving Money Monster a second glance. 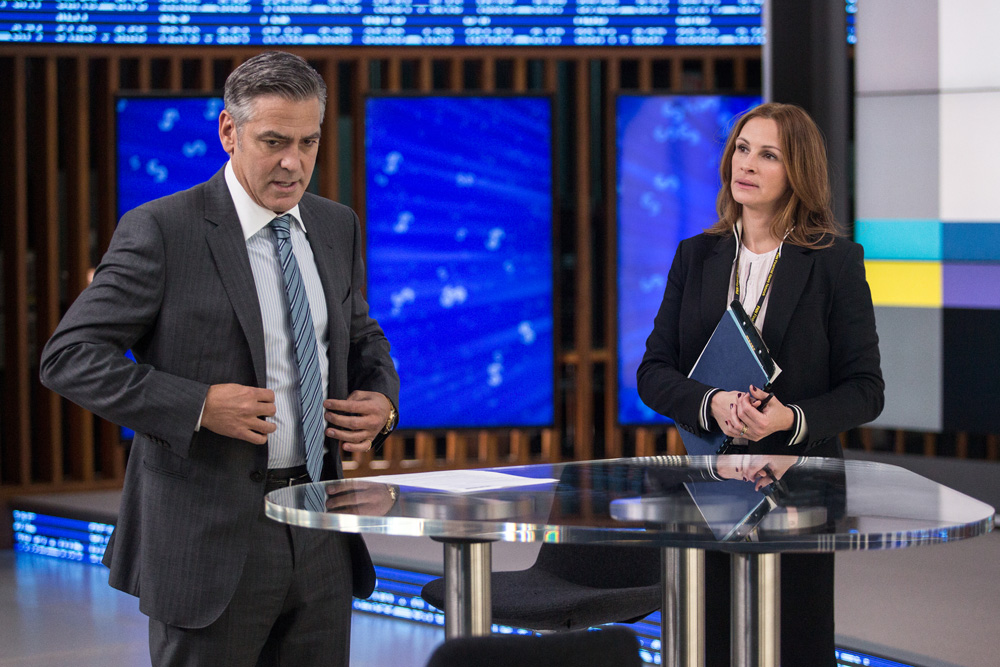 Jack O’Connell plays Kyle, a meager delivery driver barely getting by. Kyle had a small sum of cash left to him by his late mother and decided to invest it all on a single stock recommended by the silver shark host of a fictional program called “Money Monster”, Lee Gates (Clooney). Believing he has run out of options, Kyle holds Gates and the crew of the show at gunpoint and straps a bomb to Gates’ chest. The show’s director, Patty Fenn (Julia Roberts), does what she can to manage the scene from the control room, speaking directly to an earpiece in Gates’ ear. The real root of Kyle’s problems may not be Gates and his devil-may-care showboating, but they could be traced to the shady dealings of IBIS, which has lost $800 million on the stock market due to a “glitch”. Of course, there might be more to IBIS’ depletion of its investors’ funds than meets the eye.

As the situation grows more desperate, Gates and Patty begin to dig a little deeper into what exactly cost Kyle – and thousands like him – their money. This all leads to a convoluted conspiracy involving IBIS’s CEO (Dominic West, a.k.a. McNulty from The Wire) that can –of course- only be unraveled by our protagonists. The police (including a huffy negotiator played by Chris Bauer, a.k.a. Frank Sobotka from The Wire) accomplish less with a full arsenal of heavily armed cops at their disposal than Patty does with her headset and a handful of connections. 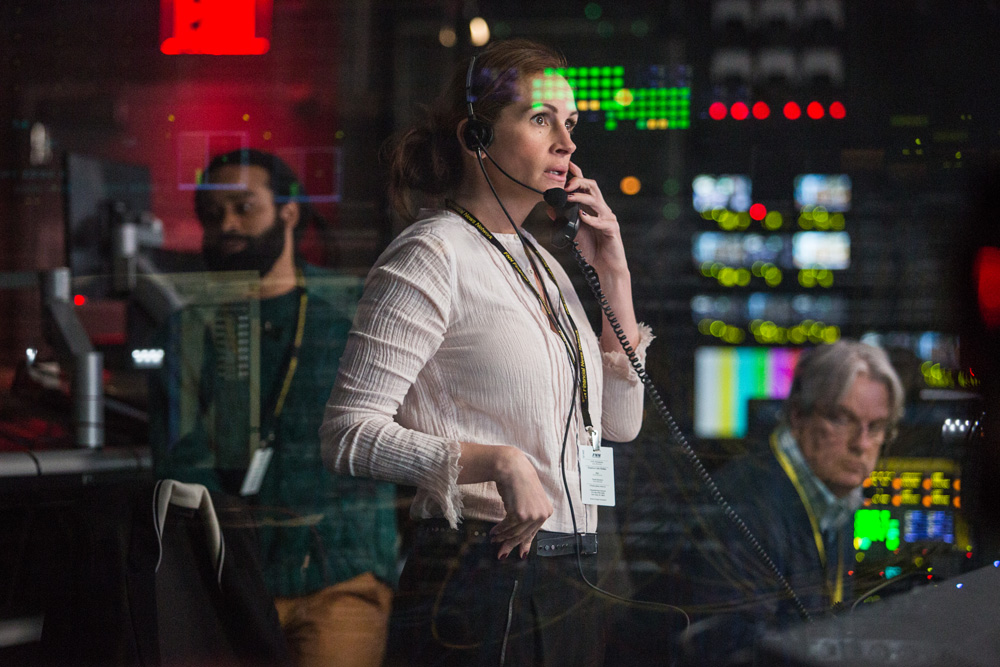 The main attraction here is, by a wide margin, the film’s trio of main stars. Clooney can find a genuine way to entertain in nearly every performance he gives and the truth is no different here. He’s reliably fantastic and Roberts is effortlessly comfortable in a role that keeps her physically separated from the action for practically the entire movie. O’Connell is the least recognizable of the group but holds his own by giving Kyle more layers than the script does. The 26-year-old actor is probably best recognized as the star of Angelina Jolie’s Unbroken and again shows here that he could have a decent acting career ahead of him. Being paired with a pro like Clooney for 99% of his screentime certainly must have helped O’Connell step up his game in a major way, and his commitment definitely shows. 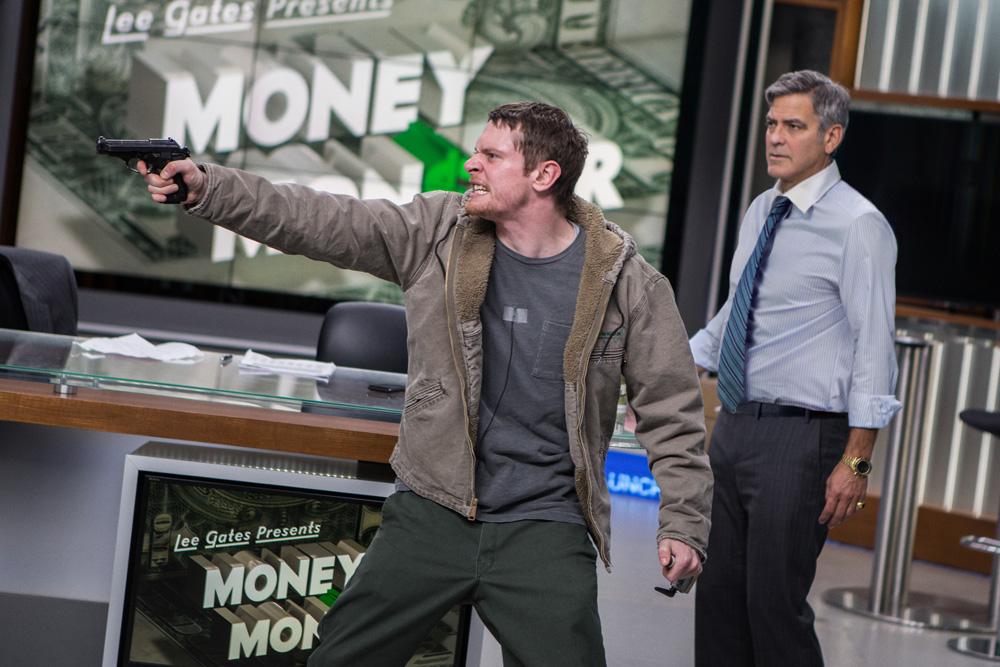 The film’s director is Jodie Foster, who doesn’t do an overly effective job behind the camera here but doesn’t bumble the proceedings either. She is a solid director and Money Monster does maintain a sleek pace that lags in spots but soon returns back to, at most, a modest jog. Despite already running at a brisk 98 minutes, Foster and her team could’ve stood to trim some fat and trust in their audience a bit more; one gets the impression that the screenplay was needlessly dumbed down to pander to as many general audiences as possible.

This is Foster’s first directing gig since 2011’s underrated The Beaver and she does exhibit confidence in her abilities to craft an attractive frame – she unfortunately just isn’t given very deep material to sculpt with. The socioeconomic jargon sounds like it isn’t well understood by anyone however, and as a result the film fails to maintain a constant air of credibility throughout. 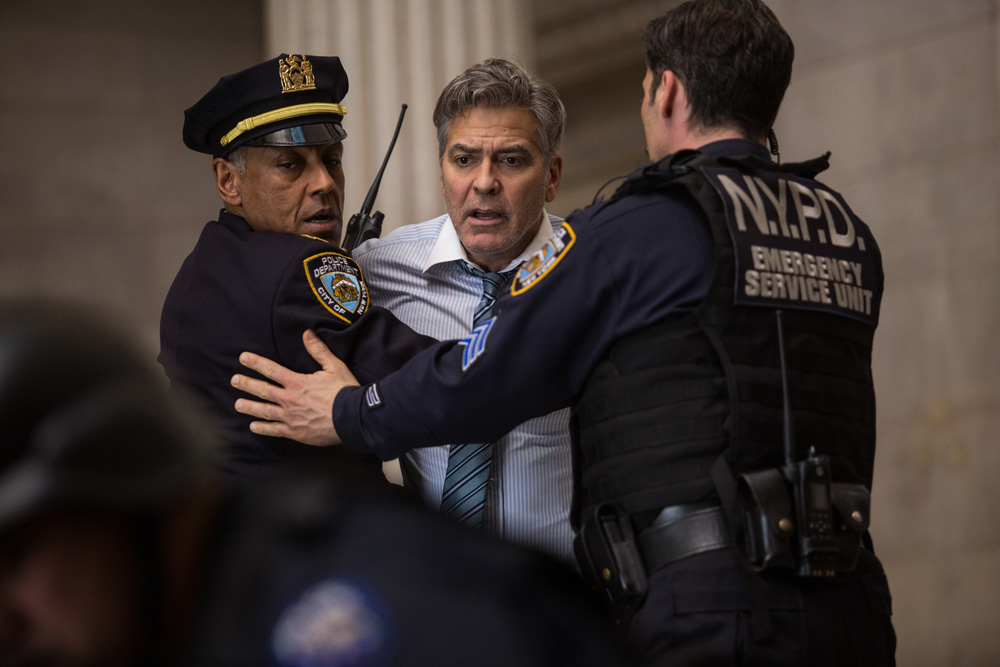 One couldn’t be blamed for fearing that the film would succumb to a bad case of “middle aged people talking about tech” that can sink so many modern day thrillers (for a prime example, see Michael Mann’s 2015 disaster Blackhat). There are lots of flashy cuts and visual journeys through fiber optic cables mixed in with various dialogue pertaining to the act of “hacking”. But Money Monster simply doesn’t have the chops to take a solid swing at Wall Street, investment fraud, or even cyber crimes.

There aren’t many issues with either Clooney or Roberts, but I do wish Jodie Foster had fought a little harder to make the film stand taller than its mediocre contemporaries. The finished product isn’t exactly what you’d call a “taut thriller” but it’s an attractive enough way to spend an hour and a half in a dark, cool theater without having to engage your brain much. It’s just a shame that our emotions aren’t given anything to connect with either.

Three fat stacks of scrilla out of five!