Legend is the name of this gangster biopic, but ultimately the word “legend” can be a word that best describes Tom Hardy’s performance.

If there’s a reason to check this film out, it’s to watch Tom Hardy at work in one of the finest performances of his career. It’s just unfortunate that the rest of the movie doesn’t elevate itself to same legendary levels. 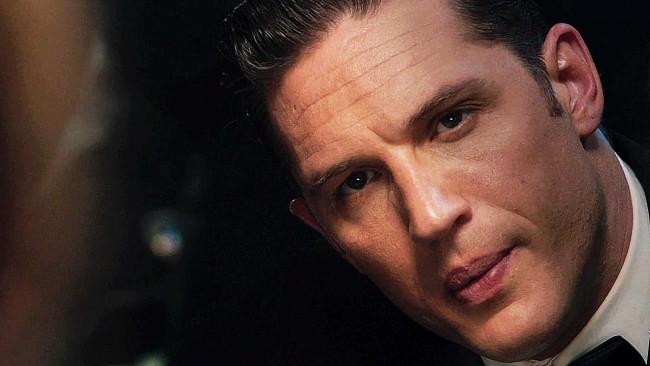 Directed and written by Brian Helgeland, (LA Confidential, Mystic River) the film tells the story about two violent and notorious twin brother gangsters, Reggie and Ronnie Kray (both played by Tom Hardy), who rule the East End of London underworld in the 1960s.

Using violence to get what they want, the brothers commit murder and rob people while running nightclubs and protection rackets. With police Detective Leonard “Nipper” Read doing what he can to shut the Krays down, the brothers continue their rapid rise to power and achieve tabloid notoriety. They name their syndicate “The Firm.”

Legend will never be confused for The Godfather or Goodfellas, and although the story lacks any real punch, Hardy is magnetic enough to hold your interest. His versatility in his performance allows us to believe that Reggie and Ronnie are two very distinct characters.

Reggie is a stylish and handsome fellow who prefers flashy jewellery and running his growing criminal empire with some class. While shaking down local businesses, and protecting his turf in bloody battles, Reggie is also responsible for keeping his twin brother Ronnie in line. 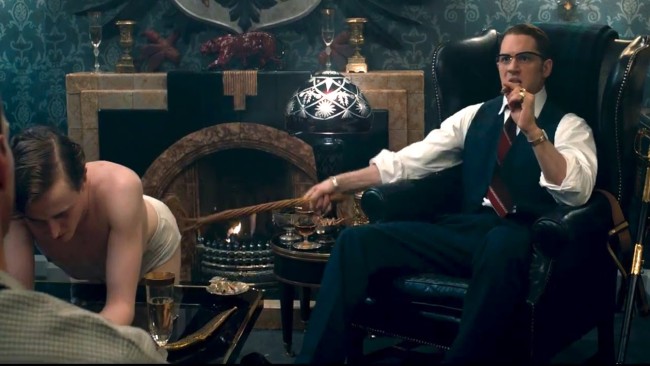 Ronnie is clinically insane and has no problems telling everyone that he’s gay, all while randomly shooting people he dislikes. Hardy dons thick glasses, slicks his hair back and even brings a different speech cadence to the character. There is a scene where the two brothers are about to get into an altercation with a rival gang in a local pub, and Ronnie goes off about the caliber of weapons that were brought to the gun fight. It’s a classic moment. 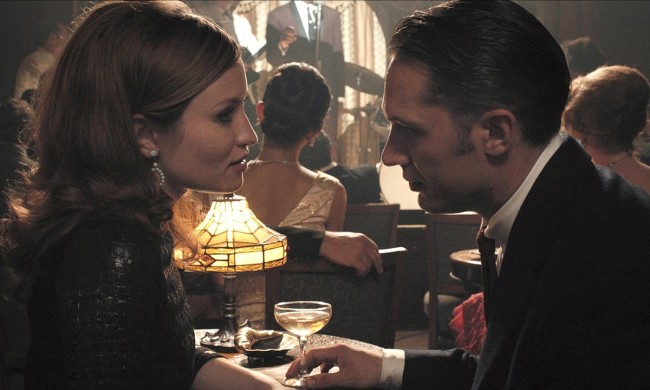 Despite Hardy’s performance, the film just falls flat. First off, the film score is God awful. Steve Stebbing who hosts the Flix Anonymous Podcast with me (heard below) makes a great point that the musical score sounds more like something you would hear on a cheap BBC television program. There is also the curious choice in having Reggie’s wife Frances Shea (Emily Browning) act as the narrator throughout the film as it’s distracting and really unnecessary.

The film is dark and gritty but there are moments where it really drags. Also if you are not familiar with the deep East End English accent there maybe times where you may find the dialogue hard to understand. I don’t mind that kind of authenticity but some people might need subtitles.

The production does a fantastic job of showing both Kray twins on the screen at the same time. There is a fight scene between the two brothers where it is clear that the director was showing off by having them engage in a fist fight. Obviously a stunt double and some CGI makes the scene possible, but it’s fun nonetheless.

There was a lot of potential with Legend but it feels like Tom Hardy’s performance was wasted on a film that should have been so much better. That’s not a knock at Helgeland, but maybe it would have been more intriguing to see this story get the Guy Ritchie treatment. The film plays out like a cheap made for television movie instead of a gangster masterpiece that the Kray story deserves. 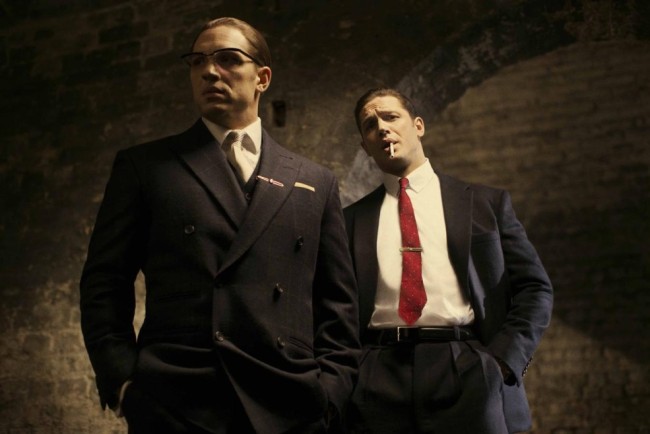 Cinema Factoid: Tom Hardy severely injured his ankle while filming but carried on with the painful injury. Although they halted filming while he saw a specialist, Hardy had to do his best not to show any kind of limp.

2015 has been a huge year for the UK native, with his performance in films like Mad Max: Fury Road and the upcoming film The Revenant, there could be an Oscar nomination in the not too distant future. Legend may not be worth your time to see in theatres, but as soon as it’s available on VOD (video on demand), find some time to check it out to at least see Hardy at his finest.

Legend only gets 3 raindrops out of 5 from me. Steve Stebbing and I chat about Legend and other films coming out this week on Flix Anonymous (Soundcloud player below) that can be heard every Friday on Vancitybuzz.com and League of Manchildren.

Legend is rated R and opens on Friday December 4th.