Full respect goes to Inherent Vice’s director Paul Thomas Anderson who decided to take a risk and create a film based on a 2009 Thomas Pynchon novel of the same name.

If you have read anything from Pynchon, you will know that trying to translate his convoluted narrative to the silver screen would be a challenge for anyone. Anderson’s style of film making was perfect for Inherent Vice.

The film is hard to keep up with as it takes you on a confusing trip. It’s set in the year of 1970 in the southern California sun in the surf community of “Gordita Beach.” The age of free love in the 60s is coming to an end and speeding into a more confusing time. Our protagonist, is a pot-smoking private eye Doc Sportello (Joaquin Phoenix),who’s dealing with the loss of his girlfriend Shasta (Katherine Waterston).

Shasta appears out of nowhere to let Doc know that she has put together a scheme to steal the money from her new boyfriend, billionaire real-estate developer Mickey Wolfmann (Eric Roberts). 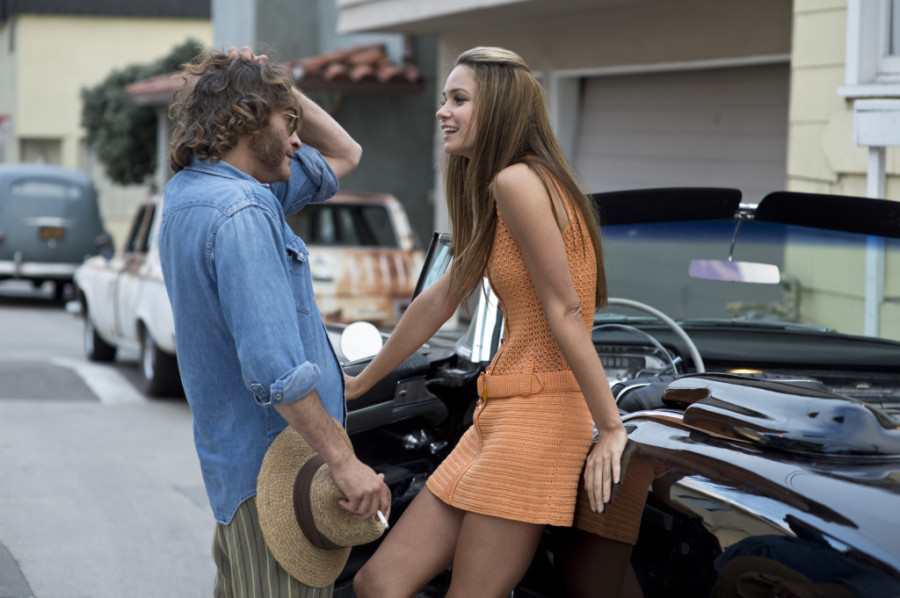 After confessing to the heist, Shasta takes off again and through all the purple haze, Doc descends into a journey to find her. At this point as a viewer you really have no idea what is going on or where the story will lead you.

One moment Doc is meeting with a Black Panther (Michael Kenneth Williams), the next moment he’s at a massage parlor that is being used to launder money for the Golden Fang drug cartel. As Doc uncovers strange clues, more questions arise and more confusion sets in.

Joaquin Phoenix is incredible in a way where he just mesmerizes you as the story goes spinning by in different directions. He’s that one constant. It’s such an odd character to play and I thought Joaquin gave Doc the depth that the character needed as he spun into paranoia and torment.

SEE ALSO: 6-Flick-Picks for the Month of January

Owen Wilson plays a funny but tragic character in a former jazz saxophonist named Coy Harlingen who faked his own death in order to work as a spy for the US Government. He is one of Doc’s closest allies. It’s rather funny how Doc and Coy find each other throughout the film in different situations. For instance they come together at a desert sanitarium where the motto is “Straight is hip.” Hilarity ensues. 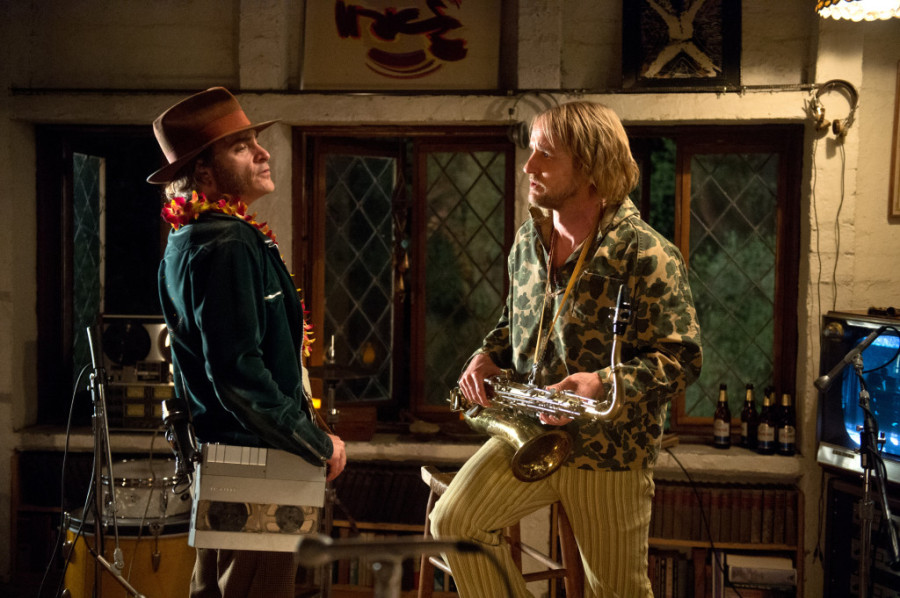 Because I also write about mixed martial arts, I noticed that former UFC star Keith Jardine makes a cameo in his movie. Keith plays a biker/bodyguard at the sanitarium and it’s clear that he still needs to work on his ground game and maybe avoid toilets. Keith didn’t agree with me.

@TrevDueck come on… Those toilet tank covers are heavy.

The film takes so many weird turns and the entire movie plays out like there were way too many hits on the bong. In some ways that was on purpose as it seemed there wasn’t a moment where Doc didn’t have a joint in his mouth as he tried to make sense of the world around him.

The plot is puzzling and I’m still trying to piece it all together. For all of its quirkiness, there are some very strong performances. I mean how can there not be you have Joaquin Phoenix, Katherine Waterston, Joanna Newsom, Benicio Del Toro, Owen Wilson, Josh Brolin, Martin Short, Reese Witherspoon, Eric Roberts and the list goes on…

Nobody stood out more than Josh Brolin as police officer/wannabe actor Christian “Bigfoot” Bjornsen who has a relationship with Doc that is hard to understand but they do have some sort of love/hate “Bro-mance” thing going on. Brolin steals every scene he is in including one of the final scenes where I’m still scratching my head. 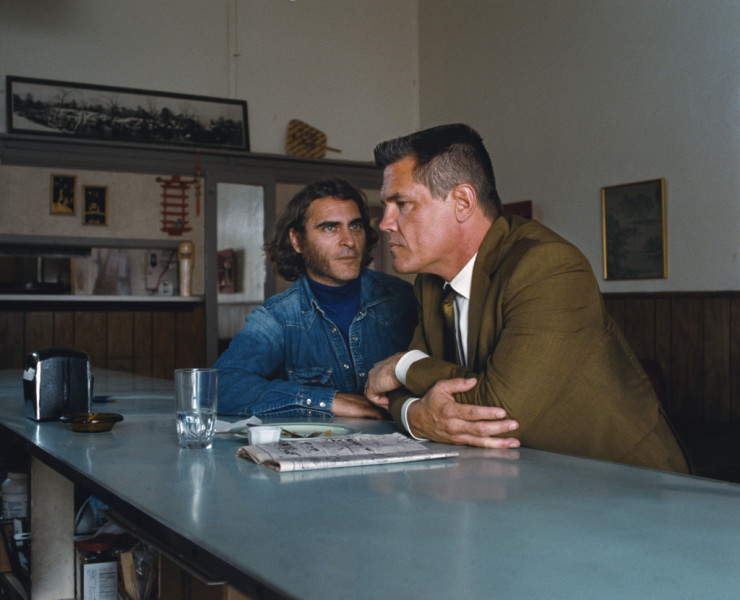 There is a very saucy sex scene between Doc and Shasta where a confession is made. Katherine Waterston has us in a trance as he reaches a climax and ends it with a classic line of

“It doesn’t mean we’re back together.”

That’s the thing with this film, it’s long winded but you can’t keep your eyes off the screen because there are these random scenes that are just so strong.

Canadian comedic legend Martin Short is also memorable as Dr. Blatnoyd. I’m sorry but I have kids so currently I know him as “Cat in the Hat” but in this film he takes a departure from a kids cartoon to a velvet wearing, coke snorter. Martin is only in the movie for brief time but his character portrayal is some of his best work. 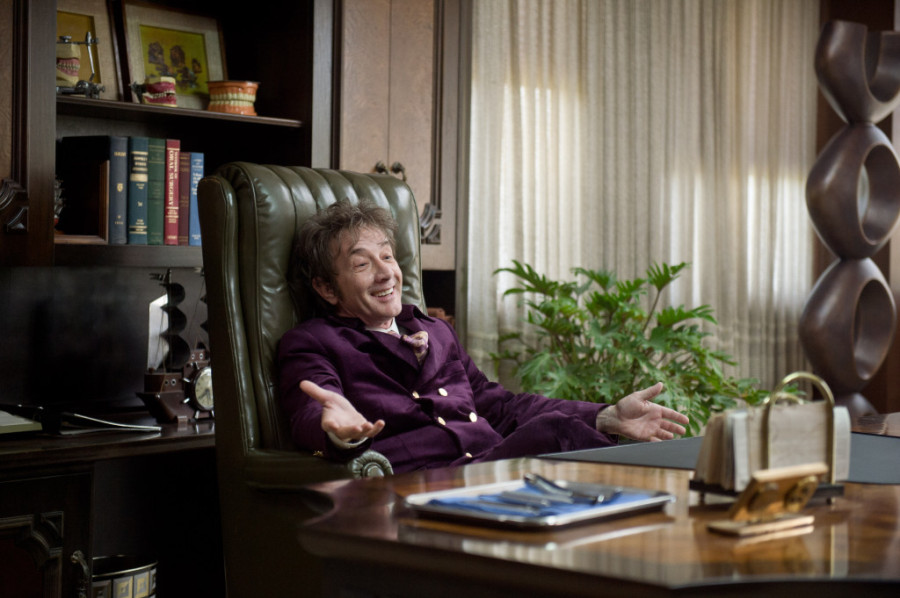 The film has elements of LA Confidential, and maybe a hint of the Big Lebowski. It was fun, it had twists, but you leave the theater going what just happened? That’s not meant as a slight, but a compliment as the director was true Pynchon’s work.

It’s interesting to watch even if you have no idea what’s going on. It’s definitely a journey and throughout all the plot haze, there are a lot of fine actors doing some fine acting. Some people may leave the theater feeling higher than they did going in.

Although it’s not for everyone, Inherent Vice is worth checking out. Go in with no expectations and let the stoner vibes just wash over you and enjoy the trip.

I give the film 3.5/5 raindrops. You don’t necessarily need to see it in theater. I will say this; you’ll probably need to watch it twice. Keith Jardine agrees with that sentiment.

@TrevDueck @VancityBuzz that’s why you have to see it twice. Haha

@TrevDueck @VancityBuzz that’s why you have to see it twice. Haha