Chris Farley does a giant cartwheel into his own documentary called I Am Chris Farley about a comedic talent that struck Earth like lightning and then was gone in a flash.

The ’90s Saturday Night Live cast could be considered one of the best of all time. Now I know some of you old purists will disagree saying that the golden age was with Belushi, Ackroyd and Murray, etc. But in my humble opinion, it didn’t get any better than Mike Myers, Dana Carvey, Phil Hartman, David Spade and Adam Sandler, to name just a few. Sorry, but the ’90s had some of the biggest SNL laughs in the history of the long-running sketch comedy show.

However, it was Chris Farley from 1990 to 1995 that truly brought the best out of SNL. His physical humour matched with his larger-than-life characters had Farley’s own castmates in stitches. Unfortunately we only had him for a brief moment in time as Farley was found dead due to a drug overdose in 1997.

Now a documentary has been released that gives a bit of an inside look on the life and tribulations of Christopher Crosby Farley from Madison, Wisconsin.

I Am Chris Farley is a doc directed by Vancouver filmmaker Brent Hodge of Hodgee Films. Brent was also behind the 2014 award-winning documentary A Brony Tale. 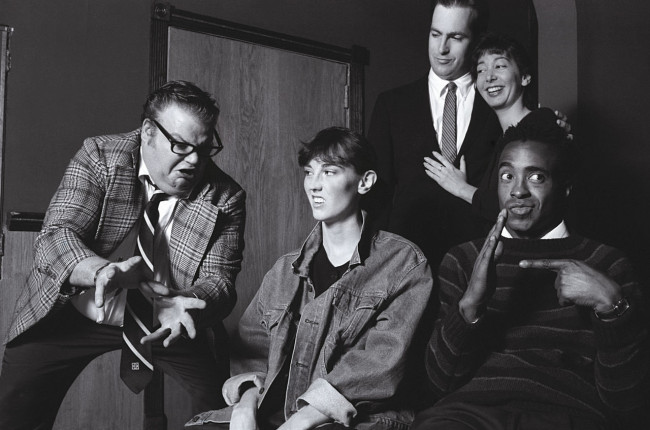 The film focuses on Farley’s life growing up, his sudden turn to sketch comedy at a local Madison improv theatre to The Second City Theater in Chicago to eventually the big bright lights of Saturday Night Live in New York City.

His family and friends talk fondly about Farley’s early days, but it’s his brother Kevin who is the central figure of the film as he gives people a glimpse into the funny but often shy and insecure side of his brother Chris.

A who’s who of comedians and actors are interviewed about the working or personal relationships they had with the larger-than-life comedian. Canadian Mike Myers does what he can to keep himself together as he retells stories about the man he grew up with in show business. It was Myers that got Farley a spot on Saturday Night Live. 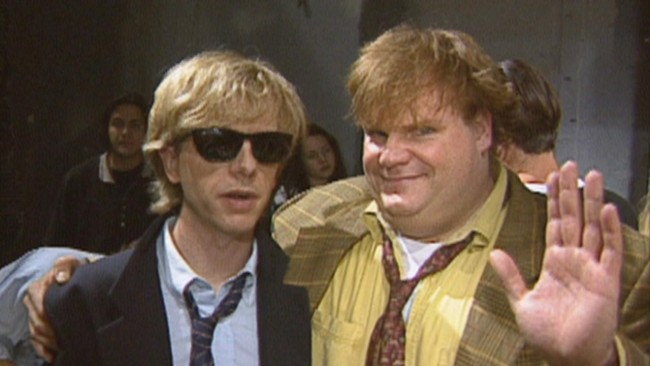 Another standout was close friend and former SNL cast member David Spade talking about how hard it was to keep Farley on the straight and narrow. It’s eerie to hear guys like Spade and even Adam Sandler talk about how they could see the train wreck coming but couldn’t do anything to stop it.

Dan Ackroyd recounts how much Farley was similar to other friends of his and how the excess of Hollywood life took three of his friends in John Belushi, John Candy and Chris Farley. It’s interesting to hear how Ackroyd and even SNL creator Lorne Michaels were more like fatherly figures and how they took Farley under their wings because they were concerned for his well being. 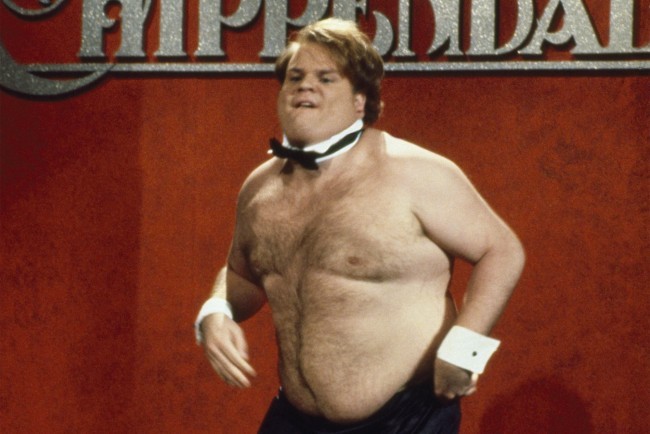 The film goes on to talk about 17 stints Farley had in rehab, including a scary and epic relapse after hearing critics bash his film Black Sheep. However, the doc doesn’t just talk about the gloominess or dwell on Farley’s final weeks on Earth. Instead the story shows off his talent, kindness, charisma and desire to be a part of a team or ensemble. Most of all, it’s about how Farley would do anything for a big laugh. Anything.

The documentary also cuts in some of Farley’s funniest moments on TV and stage. We are brought back to characters like Matt Foley the motivational speaker, which was actually based on a real life friend. That iconic character and sketch was developed way before Farley was on SNL. 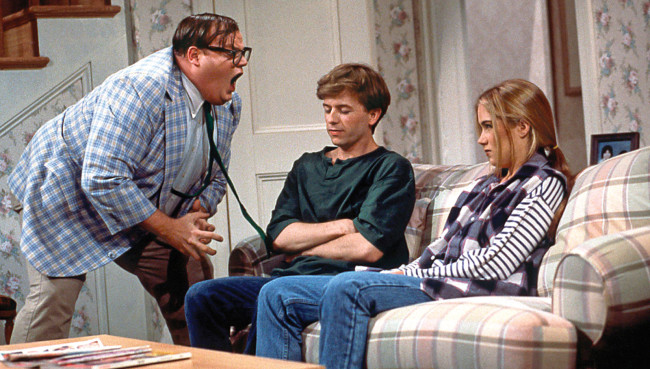 Without giving too much away, the film does a great job in celebrating Farley’s life. It’s also not scared to talk about his dark side. In some ways Farley was scared to go back home alone where it probably did feel as lonely as living in a van down by the river.

Like other docs we have seen this year with Montage of Heck (Kurt Cobain story) and AMY (Amy Winehouse documentary), I Am Chris Farley looks at a how a talented individual shot to massive fame but didn’t know how to deal with it to the point where it eventually destroyed him. It’s unfortunately a reoccurring theme but nobody has really wrestled with the idea of why that happens to so many fantastic talents. 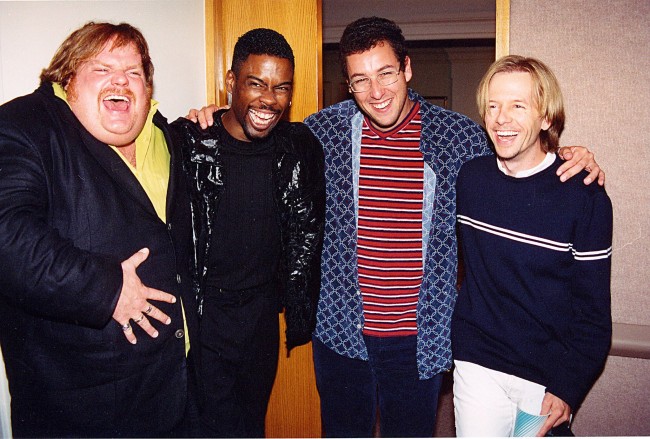 Unfortunately, this film doesn’t really get too deep into the inner psyche of Farley and why he wrestled with personal demons. All it does is show that he was a very funny but sensitive soul.

It’s apparent that with some comedians, the idea of always having to “be on” for acceptance from friends and peers can sometimes be hard to deal with. Most of the time the act hides the pain as we have seen with great comedians in the past.

Overall, the documentary is funny and sad, and you leave the theatre wishing that Farley was still around. Imagine the films or projects he would have been a part of today had he hung on.

If you’re a fan, you’ll love this doc. No problems giving this 3.5 raindrops out of 5.

Great news for those who are in Vancouver. I Am Chris Farley will be playing at the RIO Theatre starting Tuesday, August 25. But on August 28 and 29, Chris Farley’s brother Kevin will be in attendance for a Q&A session. Check RIO showtimes here.